China’s Belt and Road initiative has finally, after five years of existence, made its way into mainstream North American conversation. This massive free-trade plan out of Beijing, known previously as One Belt, One Road, will affect large swaths of Asia, Eastern Europe, Africa and now even parts of the Caribbean and South America. But it has little apparent relevance for the United States, especially under the current President and his often-stated position that trade agreements, indeed the very idea of international political co-operations, are "unfair.” They’re not making America great again.

But then came the spectre of a trade war with China, and suddenly even CNN is paying attention to Belt and Road. The project is as massive as anything in human economic history, and indeed takes part of its name from old Chinese-sourced trade routes. (The belt is overland infrastructure, including telecommunications; the road is a vast series of maritime connections; together they represent a new Silk Road for the 21st-century.)

If the whole project is put in place, that pretty much means that the century belongs to China. Smaller nations, especially the African ones, are pinning their hopes for economic improvement on the access to markets and technology – although crippling debt traps might be lurking there. Other countries feel as though they ignore trade with China at their peril. Either way, Belt and Road is a free-marketeer’s dream, promoting “regional connectivity and a brighter future” with at least 65 countries on four continents.

For some people, anyway. In Hong Kong this week I joined a group of policy wonks, bureaucrats, lawyers, academics and scientists to ask what might sound like a fairly esoteric question: What role will artificial intelligence play in this world? The answers quickly became clear: Though the whole project is based on old-fashioned things like container ships, tunnels, bridges and railways, none of it will work without extremely complex computer systems, the kind that will make the basically self-flying Boeing 777 I took to get there look like a wind-up toy. These systems will need, or soon achieve, semi-autonomous states of operation. Maybe the world we’re creating will actually belong to the algorithms, not China.

Or maybe – this was an underlying theme – it belongs, as usual, to the lawyers who specialize in dispute resolution. I was a guest of the Law Society of Hong Kong, which also sponsored the conference, and I heard a lot about how AI can’t perform the associative reasoning of the legal mind. Well, maybe.

The philosophical issues here are, like a lot of such issues, mostly speculative. Is Belt and Road a step on the way to SkyNet, or just a really cool layering of code upon code? Maybe a little closer to home, can there be prosperity without technology? Is closing the digital divide the key distributive-justice issue of our time?

I have a few ideas about all these things, but my space here is limited. The most significant things I heard came from Xie Feng, who is the Commissioner of the Ministry of Foreign Affairs of the People’s Republic here in Hong Kong and someone who knows the U.S. well. “Nobody wants a trade war,” he said, adding that the "zero-sum” thinking of certain parties is, or should be, a thing of the past. And then another home truth: A trade war is easy to start but very hard to stop. Punitive-tariff escalation has its own logic, even more inevitable than the way some people talk about technology. (For the record, I’m not one of them.)

The United States should be a lot more afraid of China than it is. One of the dislocating effects of travel across oceans is realizing how little American interests figure in global consciousness. There were no American speakers at this conference, nor at the last two I attended on the topic. Sure, the Supreme Court patriarchy-rage-fest is on television – if you’re watching MSNBC via satellite. But when President Donald Trump blows smoke about his economic success at the United Nations, the world laughs. Not even an attempt to pass this off as a joke could save the moment. (Also for the record, some pro-democracy activists in Hong Kong have asked the U.S. to use its power to challenge Beijing’s perceived influence on local politics.)

Unintentionally arousing mocking chuckles is almost always a sign of truth in the room. Some people would call that unfair. Others might just label it a reality check, or a wake-up call. 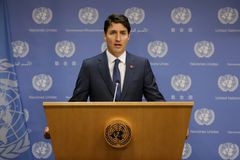 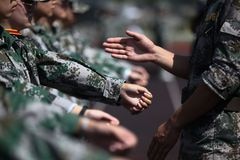 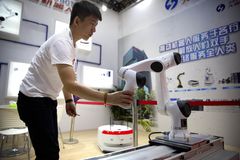