In recent weeks, one of the great parlour games was guessing the identity of the individual – or rogue nation with nefarious intentions – attempting to influence Vancouver’s civic election.

Billboards began sprouting up around town with the glowing visage of Hector Bremner and his Fix Housing Now campaign message on them. Mr. Bremner is the young, fashionable head of a new political party, Yes Vancouver. He is running for mayor. When asked about the billboards and who was financing them, Mr. Bremner would look a little uncomfortable and say he didn’t know – a declaration many thought implausible. But he was delighted, he offered, that someone felt it in their heart to go to these lengths to endorse him.

As explanations go, it was never going to fly. A crowd-funded reward was offered to whoever found out the identity of the person or persons financing the signs. Last week, The Globe and Mail revealed the name of the person who put up $85,000 to underwrite the ads: prominent local developer Peter Wall.

I mention this now because the great billboard mystery has highlighted one of the many flaws in new campaign-finance laws governing British Columbia – which I’ll get to in a minute.

You may recall the sordid reputation the province had when it came to big money in politics. In fact, it had gained dubious standing throughout the Western world for rules – and I use the term loosely – that were mostly seen to bolster the party in power. Developers, for instance, poured millions into the coffers of the pro-development Liberal Party. The New Democratic Party, which for years received millions from labour unions, campaigned successfully in 2017 to change the status quo.

Last fall, the New Democrats brought in reforms that eliminated union and corporate donations. A bill was passed overhauling the antiquated campaign-finance rules governing local politics as well. With municipal elections now under way around the province, those edicts are being tested for the first time. And they are exposing some pretty fundamental weaknesses.

Take the mystery of the billboards. People such as Mr. Wall can put up billboards or advertise in any way they want to the benefit of a particular candidate and do not have to reveal their identity. The only time this type of activity is not allowed is during the month-long campaign period. So a third party can promote a party or candidate for months and months and maintain their anonymity as long as the billboards come down before the official start of the campaign. (After that, a person would have to officially register their financial support.) What kind of ludicrous decree is that?

If nothing else, elections – regardless at what level – need to be fully transparent. At a time when some countries – hello, Russia – are using whatever means possible to sway electoral results, we need to be able to shine a light on anyone who is trying to influence the outcome of votes. Whether that’s Vladimir Putin or Mr. Wall, complete disclosure has to be a fundamental tenet of our political system. Mr. Wall should have every right to back any candidate he wishes, in any legal manner at his disposal. He just needs to do so understanding that the public has a right to know what he’s up to.

Anonymity is not something that can be offered to anyone trying to impact our politics.

This is not the only problem the current civic elections have revealed about the province’s new campaign finance reforms.

There are no spending limits during the three non-election years in civic politics. The government imposed fairly strict limits during and in the months-long lead-up to elections, but in the three years prior, it’s a free-for-all. Unions and corporations can donate whatever they want. Developers can fill the coffers of any party they desire, including that of the sitting civic government whose approvals they desperately need. Parties don’t even have to report donations.

This is exactly the type of stuff people wanted removed from politics and, at the provincial and federal level at least, they mostly got it. Why would we allow it at the local level? You either take big money out of the political system – all of it – or you don’t.

These are just some of the problems the New Democrats need to address if they are truly determined to bring the province’s campaign-finance laws in line with our times. This could be one of the government’s greatest legacies: introducing the toughest electoral finance reforms in the Western world. But it has a way to go yet. 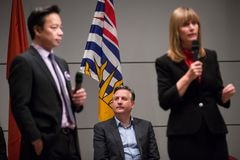 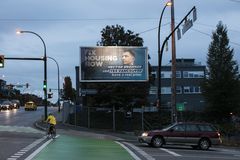 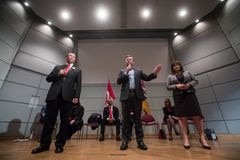