As Alberta released its models for the pandemic this week, it was apparent Jason Kenney was already planning for the period beyond the peak of COVID-19 cases. What was also clear: More than any other Canadian political leader to this point, the Alberta Premier is willing to embrace surveillance by smartphone to aid in his province’s economic reboot.

In short, he wants people returning to Alberta from other countries to be monitored, by an app installed on their phones, to make sure they are following quarantine orders in the months ahead. This stringent approach will help stave off a second wave of COVID-19 and contribute to the reopening of businesses, offices and schools in the latter half of this year, he said.

“We can either maintain a super-tight lockdown on our economy, for months to come – in which case, the economic damage would be incalculable – or we can take a more targeted approach."

What we cannot know now is whether Mr. Kenney is leading the charge in what is an inevitable technological solution to help to control the spread of the virus – and eventually restart the Canadian economy – or going down a dangerous path when it comes to personal privacy and government overreach.

Mr. Kenney used the release of his province’s pandemic projection data this week to also lay out his “Relaunch Strategy," a plan to be deployed once the expected peak of COVID-19 deaths and hospitalizations in May or early June has passed. In a way, it seemed odd the Premier was already focused on a business recovery when he and public health officials have said taking care of the ill, and managing the pressure on hospitals and health care staff, are the most pressing matters.

The economic fallout of the pandemic is likely to hit harder and last longer in Alberta, due to tanking prices of oil, the province’s main commodity. The Premier is warning of a coming unemployment-level spike that could hit 25 per cent, and he makes frequent comparisons to the Great Depression. His argument for why the strategy is relevant today is that "the economic shutdown is also having an impact on people’s health and well-being.”

The Premier only outlined the broad strokes of the relaunch strategy, but the main goal is allowing for the phased-in return of some aspects of normal life while holding a second wave of coronavirus infections at bay. This will be done, Mr. Kenney said, by following the example of Asian countries such as Taiwan, Singapore and South Korea, where governments have managed through strict rules and rigorous tracking to keep parts of their economies functioning while much of the rest of the world is on lockdown.

Part of the plan includes a broadside at Ottawa’s response to the pandemic. The Premier said this week it was a mistake for the federal government to wait so long to close Canada’s borders, especially from countries with high rates of infection. Alberta’s public sector will take a new, yet-unspecified role in enforcing quarantines for international arrivals at airports or border crossings, Mr. Kenney said, similar to British Columbia, where the province is now requiring that travellers from abroad commit to specific plans to self-isolate.

Other key elements of the strategy include a massive increase in testing for the disease, tireless contact tracing, getting Albertans to regularly wear masks in public and, eventually, the use of serological tests that allow for the identification of people who have recovered from a COVID-19 infection and have some kind of immune response.

The most controversial measure will be Mr. Kenney’s push to track the movements of those returning from hard-hit countries with smartphone apps, even if he is promising their “limited and appropriate use."

Mr. Kenney can point to strong examples such as Taiwan, which has fewer than 400 confirmed COVID-19 cases and five deaths, and where restaurants, schools and offices have stayed open. People arriving from overseas are subject to having their phones “satellite-tracked” for enforcement.

It is possible other Canadian leaders would consider following Alberta’s lead. Last week, Quebec City’s police chief said officers used cellphone data to track and arrest a COVID-19-infected woman who allegedly violated an order to self-isolate. On Thursday, Ontario Premier Doug Ford expressed reservations about cellphone tracking being a “Big Brother approach," but also said it was a “pretty good idea” he would discuss with his Alberta counterpart. Prime Minister Justin Trudeau has said the federal government has no plans to use such tracking tools.

There are reasons for caution. Taiwan is doing much more than just tracking people by their phones. Even before the pandemic, the government monitored for reports of disease in other countries, and watched ports of entry for sick individuals. In the midst of the outbreak, people in quarantine have meals brought to their doorstep.

The world is still learning what really works. Despite strict surveillance that helped control the virus infection rate earlier this year, Singapore has reported a new jump in cases this week.

Laying out a plan to rebuild an Alberta economy in disarray is admirable. But Mr. Kenney also put out the cellphone strategy without releasing key details about what kind of tracking he would like to see or what one of an array of possible apps he is considering. He has not answered privacy questions, such as how can the public be assured data will not be misused, that data will eventually be destroyed and that monitoring will end when the coronavirus is brought under control.

The Premier’s actions will be judged by his words this week. “This is not a violation of civil liberties," Mr. Kenney said. “This is an essential and limited public health measure.” 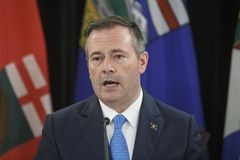