Peter Jaworski teaches ethics at Georgetown University’s McDonough School of Business and is co-founder of donationethics.com

In May, Canadian Blood Services warned of an imminent shortage of a take-home immune globulin product. Immune globulin is one of the many life-saving medicines made from human blood plasma, and a shortage means many new patients may be unable to access it. Without immune globulin, everything becomes more difficult for patients who need it – from standing up, to walking and even just breathing.

The short-term solution would be for more people to donate more plasma at a Canadian Blood Services clinic.

Unfortunately, Canada collects only about 17 per cent of the plasma necessary to meet domestic demand for immune globulin. Paid donors in the United States are how we meet (and exceed) our country’s demand.

That’s why a long-term, sustainable solution to the plasma supply problem would be to pay Canadian plasma donors. Paying plasma donors is a successful model to ensure security of supply. Only countries that pay donors are self-sufficient in plasma. The rest have to import it from countries that pay. Paid donors in the United States are responsible for more than 60 per cent of the entire world’s plasma used to make plasma medicine.

In terms of safety, a Health Canada Expert Panel report from May of last year noted that paid plasma is not less safe than unpaid plasma and it is less expensive than trying to recruit and retain unpaid donors. Paying donors is also the most likely way of ensuring security of supply. Paid donations having a negative effect on unpaid blood donations is also unlikely. The United States has more than 800 paid plasma centres, and still has higher blood donation rates than Canada.

There are only three paid plasma centres in Canada, and when one company, Canadian Plasma Resources, expressed an interest in opening or expanding paid plasma centres, our largest provinces (Ontario in 2014, Alberta in 2017 and British Columbia in 2018) banned paying donors rather than welcoming an opportunity to both help meet domestic needs and contribute to the global supply.

Banning paid plasma donations is opposed by many patient groups that rely on plasma medicine and there’s overwhelming support for paying donors amongst the general public (more than 70 per cent of Canadians believe paying donors is “appropriate” according to one nationally representative survey).

Rather than listen to patients who rely on paid plasma and the public at large, the governments of Ontario, Alberta and British Columbia chose to listen to public sector unions such as the Canadian Union of Public Employees. Union opposition is most easily understood by looking at which side their bread is buttered on: Private companies don’t hire public union employees. Canadian Blood Services does.

If that sounds cynical, it is. But many of the arguments offered against paid plasma were and continue to be disingenuous or worse.

For example, CUPE refuses to publicly state that paid plasma is as safe as unpaid plasma, which is what Canadian Blood Services and Health Canada have been saying for years.

Claims that paid plasma exploits the poor are also mistaken. Pay is about $30 an hour in Canada (it takes 1.5 hours to donate plasma), and represents about 30 per cent of the total revenue from a litre of plasma (a much larger share than profits, which are less than 3 per cent of revenue). That’s a fair deal.

And besides, opponents of the paid plasma model don’t argue against importing paid plasma and using it in Canada, just against paying Canadians for their plasma.

Opponents also like to point out that plasma collected in the paid plasma centres in Canada is exported, with none of it staying in Canada. That’s true, but it’s true because Canadian Blood Services choose not to buy Canadian plasma in spite of its lower price and domestic origins.

And then there’s the hypocrisy of it all. Since Ontario and Alberta banned paid plasma, they have only come to use more paid plasma than they did before the ban. British Columbia, which banned paid plasma just a month before Health Canada’s Expert Panel issued its report, will also be more reliant on paid plasma this year than last year.

We will probably always rely on paid plasma. The only question is whether we allow Canadian companies to pay Canadians for plasma to help others in their country or continue to use taxpayer dollars to pay U.S. donors for theirs. 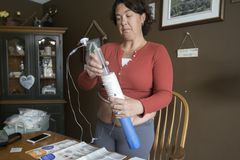