Enes Kanter plays for the Boston Celtics of the National Basketball Association.

For me, there is nothing I would rather do than play basketball. It’s my lifelong passion and my escape. Every time I go to a new city to play, I am humbled and inspired by my amazing fans, who keep encouraging me to be who I am.

But I haven’t been able to go to cities outside the United States. I’ve had to leave my team behind, which is hard for someone like me, who values camaraderie and team solidarity as much as I do. The reason: I speak out against the Turkish state.

In 2016, tens of thousands of innocent Turkish people, including babies and pregnant mothers, were thrown into prison following a failed coup against Turkey’s authoritarian leader Recep Tayyip Erdogan. In his words, it was a “gift from God” that helped him crush the opposition, cleanse the military and transform the entire country in his own image. As if this wasn’t enough, more than 100 Turkish dissidents who sought asylum in other countries, including in the Balkans, were kidnapped and sent to prisons in Turkey. I’m blessed that I’m in the U.S. and not in a dank prison cell.

Mr. Erdogan’s government has become so powerful that it can reach beyond its borders and into its opponents’ lives. It is so angry with me for speaking up against its human-rights violations that it has issued an Interpol Red Notice for my arrest, even sending goons to harass me on the streets of Boston. Turkish ministers have flown to New York to encourage Mr. Erdogan’s supporters to limit my activities and freedom in the U.S. Every time I meet public figures or politicians, Turkey’s diplomats intervene, threatening them or discouraging them from meeting with me again.

Almost every week, I receive death threats. I’ve already survived a kidnapping attempt in Indonesia. I have no idea what awaits me every time I travel somewhere. So I’ve been forced to miss games, including one in London earlier this year, just because an autocrat 5,000 miles away wanted it to be so. And it has been an open question whether I will be able to go to Toronto to play against the Raptors on Christmas Day, as scheduled.

I wasn’t under any illusion that my activism was going to come without repercussion. But the disproportionate retaliation I received from the Turkish government for calling them out has also taken an enormous toll on my personal life, my family and everyone who has stood by me.

There are public figures who have been placed in Turkish prisons just because they’ve exchanged messages with me. There are fans allegedly under investigation for having my autograph or for taking a photo with me. My sister, who is a doctor, cannot get a job because we share the same last name. My father, an academic, was dismissed from his position and arrested; my mother hasn’t communicated with me for years now out of fear that she might get into trouble. All these efforts are just to silence me.

Turkey is so powerful and strategically located that there is not much the world can do to prevent this once semi-democratic country from sliding into autocracy. Still, the Western world shouldn’t let Mr. Erdogan harass dissidents that have fled to seek refuge. It is the least it can do.

Canada sets a great example. The country’s hospitality has attracted thousands of highly-educated Turkish refugees, some of them former members of the judiciary, journalists, business people and university professors. It is a spectacular display of solidarity with people who need help, a demonstration of Canada’s welcome attitudes and core values. I can’t thank the Canadian government enough for letting refugees from my home country survive here and continue practising their professions. In the previous off-season, I crisscrossed the U.S. to hold 50 free youth basketball camps in 30 states to teach kids leadership, teamwork and sportsmanship, even though Turkish consulates across the U.S., in addition to pro-Erdogan groups, tried to intimidate venues into cancelling my camps. I hope to hold similar ones in Canada next summer.

But as they increase the pressure, I am encouraged. As they tighten the noose, I feel liberated. I will use every opportunity to stand up for oppressed people everywhere, be their voice and champion. For this reason, I recently started an online campaign called You Are My Hope, calling for the release of innocent people imprisoned in Turkey and raising awareness of the continuing crackdown. My supporters, wearing prison suits, stage protests in major cities. We won’t tire and we won’t stay idle, because if there is one thing that will encourage evil to walk free on Earth, it is for us to remain silent in the face of scorching injustice, the likes of which plagues every inch of my homeland.

I also want to thank Canada for another reason. I want to thank Prime Minister Justin Trudeau’s government, U.S. and Canadian law enforcement, U.S. Senator Ed Markey, the Celtics, the NBA and my managers for working diligently to make my Christmas game against the Raptors possible and ensuring my safety there. And, on Christmas day, I will play in my first game as a Celtic outside the U.S. when I take the court against the Raptors.

As Martin Luther King Jr. timelessly observed, “Injustice anywhere is a threat to justice everywhere.” Standing up for something we believe in makes us better humans. And I couldn’t be happier that these people have worked together to stand up to Turkey’s injustice and that I will finally get to join my team and do what I do best: play basketball.

In the Knicks’ Kanter, Turks find an unlikely figurehead for resistance
December 20, 2017 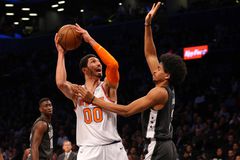