This column is a distraction. A brief respite. The topic on all our minds has infiltrated every aspect of our lives so completely that, if my inbox is at all representative, we are now hearing from linen companies from which we ordered once, three years ago, about their contingency plans during this global pandemic. To be sure, the world is in a grave and precarious state. At the same time, I think our brains all need a break.

So, if I may, allow me to delight you with a tale of my past emergency room visit – one that offers a little more levity (well, levity in hindsight) than many of those we might hear today.

It was about two years ago, and I was more than six months into a bout of chronic idiopathic urticaria, which is the diagnostic term for a case of chronic hives with no known cause, or as I preferred to call it, “What the hell is wrong with my body?”

Every day, for months, I had hives spreading over my body. These hives were resistant to prescription triple-dose antihistamine cocktails and topical steroids. They laughed in my face when I tried to challenge them with pedestrian scratch tests and blood analyses. (Those tests, for the record, said I was perfectly healthy and allergic to nothing.)

Occasionally, my eyes or lips would swell and distort my face, a condition known as angioedema, which told me I would look terrible with cosmetic lip injections. The only relief I got was through occasional two-week, horse-sized courses of oral steroids, after which my hives would return with a vengeance, angry that I had dared to evict them.

Anyway, one night, my hives decided to stage their Normandy invasion. In a matter of hours, they were everywhere – morphing into giant welts all over my arms and legs, blanketing the soles of my feet, turning my back into a spotted, hot, bright red mess.

Desperate and mad with itch, I grabbed a giant bottle of aloe vera gel from the bathroom and globbed it all over my malfunctioning body. It wasn’t working. More aloe. Still itchy. More aloe.

Soon, the man who would become my husband wandered into the room, ostensibly to investigate why what sounded like a cat in heat had taken residence in our bedroom. There, he found his future bride, hunched over, nearly naked, glistening in a thick shield of aloe vera, snot and tears, as if she had just lost the unsexiest green Jell-O fight on Earth. “I think we should go to the hospital,” I said.

We drove about 10 minutes to the nearby hospital, where I walked into the emergency room on my toes, as the hives on my feet had started to swell. There was an abundance of vacant waiting room chairs, but I opted to stand (well, lean), since the pressure of sitting made my hives worse. I can only imagine what my fellow emergency room patrons thought of the young couple who wandered in late at night – one walking funny and refusing to sit down.

The triage nurse did an initial assessment after what, I’d estimate, was roughly 10 years of waiting and asked me the questions I had become so accustomed to hearing: “Any trouble breathing?” No. “Are you on any medications?” Yes, all of them. She looked at me and raised an eyebrow: “Any allergies?”

The nurse then told me someone would look at my “rash” soon, which very well could have been her last words had the emergency room not been host to so many witnesses. Chronic pain sufferers often talk about a type of enduring depression, but ask someone who suffers from chronic itch what it’s like, and they’ll describe a sort of feral, unhinged madness. You’ll do just about anything to make the itch stop, which is why triage nurses with poor vocabularies can become unlikely targets.

Thankfully, after a couple more hours of waiting, my hives (along with my homicidal fantasies) slowly started to settle. I was able to sit, now moved into a smaller waiting room, where I played Would You Rather? in my head while scanning the other patients. There was a man clearly suffering from some sort of abdominal pain, and an elderly woman with a bladder infection and indiscreet family members. I decided I’d trade my raging leopard spots for either of their afflictions.

At last, at an hour only known to the infirm or the inebriated, it was my turn to be examined. I took occupancy of the little emergency room bed, where I peeled off my sticky aloe-covered clothes and switched into a gown to reveal the Armageddon on my body. “Hello, Ms. Urback,” I heard, as the doctor pulled back the curtain. Not looking up from his chart, he said, “I hear you have a rash?”

Opinion
This pandemic could trigger a spiral of disasters – if we let it
March 20, 2020 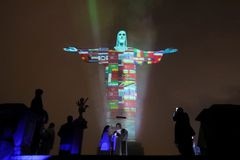 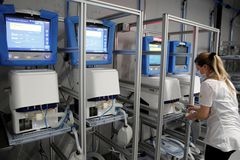