In Russia, an entire generation has now grown up knowing only Vladimir Putin as their ruler.

But they have come of age viewing Mr. Putin not as a source of stability, as their parents did, but as a force of decline. The proportion of Russians who view themselves as “middle class,” according to an annual study by Sberbank, has fallen from 60 per cent in 2014 to only 47 per cent today – meaning that almost 20 million people have fallen out of a secure livelihood.

This week, we heard from these frustrated Russians as tens of thousands of them took to the streets in dozens of cities for the eighth straight week, expressing their disapproval at rigged municipal and regional elections, and their dismay at a collapsing economy. It was the largest wave of protests since 2011.

Mr. Putin has responded, as he did in 2011, by getting nasty. Police and security services have been exceptionally brutal. Protesters are getting lengthy prison sentences. And on Thursday, police raided the homes and offices of democracy activists in 39 towns and cities in an attack on Russia’s last viable opposition politician, Alexey Navalny.

But this is not 2011. After those troubles, Mr. Putin was able to regain his political legitimacy by invading Crimea, by mounting a Soviet-nostalgia propaganda campaign to make himself a figure of national pride and especially by having his officials imprison, murder or intimidate into exile virtually any potential protest leaders or opposition politicians.

When I ask the surviving leaders of 2011, they tell me that this is the big difference. For Mr. Putin, crushing the opposition doesn’t work any more: There’s nobody left to crush.

Garry Kasparov, the chess grandmaster who became a popular figure in Russian pro-democracy politics after 2005 and played a key role in organizing the protests of 2011, tells me that none of the organizing work he did then would be possible today.

“In 2011, we had our headquarters in central Moscow – Navalny and Boris Nemtsov and me and the others – and we worked together and made mass petitions and organized protests,” he told me from New York, where he has lived since Kremlin officials beat him up in 2013 and then killed Mr. Nemtsov in 2015. “The government was less restrictive – compared to what’s happening today, those were the vegetarian years.”

Now, he says, “it’s different because the protest has not been prepared by any groups. Most protest organizers are now in jail or out of the country or dead like Boris Nemtsov. It’s really spontaneous, and this time it’s not just Moscow; it’s across the country. It has a real economic component. Putin has been in power for nearly 20 years and people are tired.”

And the protesters are different people. “The core of the 2019 protests is much larger,” Mr. Kasparov says. “We are seeing a generational protest … They see Putin’s continued rule as a sign of stagnation; they have no opportunities and they see that some of the best opportunities are available to the sons and nephews and nieces of those who are in power today.”

Russians are no longer willing to give Mr. Putin a blank slate – even though he has outlawed or intimidated almost all opposition options. Last weekend’s city-council elections in Moscow saw almost half of the capital’s voters cast a ballot against Mr. Putin’s United Russia movement – even though every real opposition candidate had been banned.

“Putin is getting weaker, but democracy is not getting stronger,” Mr. Kasparov says.

What keeps Mr. Putin in power – and keeps his oligarch rivals from deposing him – is that he has been able to keep himself strong outside of Russia, even as people turn against him from within. Few countries have imposed sanctions as aggressively as Canada has.

The President of the United States has suggested that Mr. Putin’s invasion of Crimea be forgotten and Russia be readmitted to the Group of Seven. France and Germany are avoiding harsh criticisms or the toughest sanctions. Pro-Putin or Putin-backed political parties have scored election successes in Germany, Italy, Austria and elsewhere, and Putin fans or imitators hold executive power in Hungary, Turkey, the Philippines, Brazil and the United States.

“Geopolitically, Putin now feels that he’s safe,” Mr. Kasparov says. “He understands that sanctions are hurting him, but he looks at the big picture – and the big picture’s not so bad. And that’s bad news for the protesters.

"At this point, the internal protest cannot succeed unless it is merged with external pressure.”

In other words, we have approached a moment, as in 1991, where a mass movement for Russian democracy will be doomed without the wider world’s overt support. It’s time for our allies to get on the right side of history. 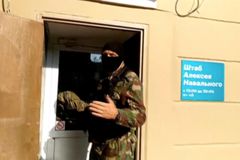 The thorn in Putin’s side: Moscow election results a sign of things to come, opposition leader says
September 12, 2019