Abel Bosum is the Grand Chief of the Grand Council of the Crees of Northern Quebec and President of the Eeyou Istchee James Bay Regional Government.

If you’ve been watching the news over the past several weeks, you might have the impression that Indigenous rights and the appetite of non-Indigenous society for resources are irreconcilable, that polarization is inevitable, and that Indigenous and non-Indigenous Canadians are incapable of listening to one another. It doesn’t have to be this way.

The only way to bring down the barricades that separate us is by truly listening to one another. Right now across Canada, when we get word that a barricade is to be going down, even more spring up. The Prime Minister calls for dialogue and patience, and then yields to the lead of premiers. The situation is confusing for anyone trying to find resolve.

For the Cree Nation of Eeyou Istchee, the situation echoes 2002 – which marked the peak of decades of bitter conflict with Quebec. It was a conflict defined by an unfortunately all-too-common threat posed by large-scale resource development to traditional ways of life, based on hunting, fishing and trapping. We were forced to turn, time and again, to the courts, and to international organizations, to defend our rights. The conflict became so intense that our relations with Quebec broke down completely.

With no end in sight to the conflict, Quebec premier Bernard Landry and our Grand Chief, Ted Moses, agreed to talk and listen to one another as equals. The result of those discussions was the agreement that has come to be called the Paix des Braves. It marked a turning point in Cree-Quebec relations based on mutual respect, establishing a nation-to-nation partnership between the Cree and Quebec in the governance and development of our traditional territory of Eeyou Istchee.

Two leaders having the courage to listen to each other can provide an opportunity, but to have real lasting change, that courage must find its way to the front lines. With new blockades emerging on what feels like an hourly basis and leadership that is unable to provoke an inspiring call to reconciliation, the solution can only come from the individuals that face each other across barricades or negotiating tables.

In 2003, the late Tommy Neeposh, a 90-year-old family leader and master hunter of the Cree community of Mistissini, with no formal western education, was being consulted over a major hydro-electric project that would see hundreds of square kilometers of his traditional hunting lands being disturbed. He and his fellow Cree hunters sat facing an army of engineers and they had the audacity to suggest the construction of a two-kilometre transfer tunnel that would reduce the environmental impact of the project. Astonishingly, the engineers listened to Tommy , understood the ingeniousness of his recommendation and his transfer tunnel came to be built.

Four years later, Sanders Weistche, another master hunter, this time from Waskaganish, was responsible for protecting a sacred community fishing site that has fed our people for thousands of years. He redesigned a riverbed and shoreline to save this critical site, when hydrologists, biologists and engineers were unable to reassure the community that anything could be done. They listened to Sanders and stepped aside, giving him access to the machinery he needed to save this sacred site. Tommy and Sanders were examples to us all. Meegwetch (thank you).

Today, Quebec and Canada continue to benefit from this empowerment because it has now deeply embedded in our people the conviction that we have the power to participate, to improve, to direct, to influence, to decide.

The Cree Nation is no longer relegated to the sidelines as just protesters or agitators. We have become a nation of deciders.

When I first met with Premier François Legault in 2019 to discuss the desire of the Cree Nation to be involved in shaping major transportation infrastructure on our traditional lands, I was not met with dismissive disrespect or even skepticism. Instead, I met a leader who was excited to explore what we could achieve together.

It is the courage of our Cree community members who shared their knowledge, and of the government officials who listened to them, that made it possible for Mr. Legault and I to sign the Grande Alliance, a 30-year development plan for our lands in northern Quebec, on Feb. 17.

To find our way out of the darkness that Canada now finds itself will take the courage of police officers to find peaceful ways of building bridges and for frustrated First Nation community members to find a voice without harming their neighbours. 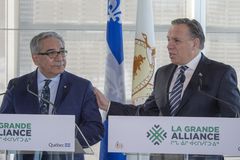