In search of a restoration of moral, civic and intellectual norms, the Democrats and the mainstream media are suddenly all gaga over a 37-year-old mayor whose favourite book is James Joyce’s Ulysses – and who even claims to understand it.

Pete Buttigieg – take five cracks at pronouncing his name and you might get it right – is the new golden boy, the flavour of the month, in the Democratic race for the presidential nomination.

The American media are swooning over him. Typical of the recent enthusiasm was David Brooks’s evaluation in The New York Times: “This is the biggest star-is-born moment,” he unjokingly wrote, “since Lady Gaga started singing Shallow.”

Mr. Buttigieg’s only office-holding experience is running South Bend, Ind., a city that’s smaller than Kingston. In a country still not overly enthusiastic about same-sex marriage, Mayor Pete, as he is called, is in one. Of his work experience at the corporate consulting firm McKinsey, a left-wing magazine groused that he’d joined the mix of “CV-padding corporate zombies.”

But in hype at least, the brainiac Mr. Buttigieg has temporarily passed two previous obsessions: Beto (Robert Francis) O’Rourke, who drew comparisons to Robert Francis Kennedy, and Kamala Harris, the tough-minded former attorney who is seeking to finish the job Hillary Clinton couldn’t.

There are now 18 Democrats seeking the nomination, and it’s a challenge to stand out in this crowd. But Mayor Pete somehow projects a different aura than the others. He’s religious, intellectual, rational. He comes across as a man of moral vision.

In conservative Indiana, he’s been South Bend’s popular liberal mayor since 2012, developing strong communication skills along the way. On same-sex marriage, he put Vice-President Mike Pence, who has opposed gay marriage, in his place, saying that he should understand that “if you have a problem with who I am, your problem is not with me. Your quarrel, sir, is with my creator.”

Some suspect he might incite a religious left. Of Evangelical Christians and their support of Mr. Trump, he says “the hypocrisy is unbelievable.” They back a President who is alleged to have paid off hush money to an adult-film actress and acts in a way “not consistent with anything that I hear in scripture or in church.”

Being from the Midwest is a plus for Mr. Buttigieg, too, and he is careful not to identify too heavily with either the left or moderate side of his party. He speaks highly of a government plan for Medicare for all, for example, but at the same time says he doesn’t seek to end private health insurance. He doesn’t think NAFTA served the country well but says six times as many jobs were lost because of automation than lost because of trade from 2000 to 2010.

Mr. Buttigieg’s father, who passed away in January, was known for his Marxist views while teaching at Notre Dame. The younger isn’t as radical as that or as Bernie Sanders, who is showing surprising strength in the Democratic race. But he does contend that capitalism is eroding democracy. The “ever-expanding” growth of big businesses needs to be stopped from "basically taking over our government.”

But for his campaign to really take off, Mr. Buttigieg will have to supplant Mr. O’Rourke as the fresh face boasting new thinking and new approaches.

The two of them offer a generational shift that goes beyond just age, though: They are coming from a different space than many of the others – as evidenced by their shared, if exalted, literary tastes.

One of Mr. O’Rourke’s favourite books is Homer’s Odyssey, and he is so fond of Homer’s epic poem that he named his first child Ulysses, the Latin name for its Greek-king protagonist. James Joyce drew substantially from the classic hero’s journey in writing Ulysses, Mayor Pete’s beloved read.

Politics should be more like the Joyce book, Mr. Buttigieg told Esquire. “You’re in this guy’s head, and you’re kind of seeing life through his eyes, and at the end through his wife’s eyes.”

An approach, to be sure, that would stand in contrast with today’s narcissism. 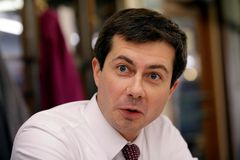