RM Vaughan is a Canadian writer and video artist based in Toronto.

In the famous biblical parable, the younger of two brothers asks for his share of the family wealth while the older is content to stay at home and take care of his aging father. The younger son runs off and blows all his money in a Vegas-level spree, complete with prostitutes and bottle service.

Eventually, the bad boy comes home, broke and bloated with sin. His father, who ought to have at least asked his idiot son to mow the lawn and take out the garbage to earn his keep, instead throws the fool a party. The older brother, meanwhile, watches the rager unfold and stews, furious that his father chooses to forgive and, as part of that forgiveness, celebrate the prodigal’s return. Big brother, the story tells us, never even got so much as the occasional goat to slaughter. No fair.

I’m with the big brother, who must have realized from where his little brother got the stupid gene. Forgiveness is for suckers. It is telling that the parable has no Chapter 2. It ends with big brother being told off for not being sufficiently joyous at little brother’s return, for not understanding that forgivers always pay the tab. If only the Bible told us what that family looked like five years later, after the prodigal son bet the whole harvest on a donkey race.

The parable is an old story, but it never leaves us. Everybody’s in on the forgiveness racket – from the Pope to self-help hucksters to our prime minister. Justin Trudeau loves to apologize for historical wrongdoings, an action that appears on surface to be of goodwill. But politicians calculate the pros and cons of every move, and who is to gain from these official apologies? The PM’s government, which of course, following the forgiveness script to its conclusion, anticipates being forgiven and likely endorsed at the ballot box by the receivers of the apologies.

As for the Pope and his church, forgiveness has played out in a much more damaging way: Abusive priests and nuns were simply moved to new territories where they were free to abuse again. And the enabling of predators was sold to parishioners as a Christian act of forgiveness. The abused, one notices here, never got half as much attention as the abusers. Wrongdoers are deserving of forgiveness, but those wronged are deserving only of pity (for a time, after which they too must become forgivers).

During the hearings for Brett Kavanaugh’s Supreme Court nomination, those who chose not to believe or to discount the testimony of Christine Blasey Ford often repeated that the assault she described happened three decades prior to her testimony. This became a mantra, that her claims were 30 years old. The subtext of that mantra was not only that time made her testimony less reliable, but that Prof. Blasey Ford, a woman of achievement and substance, ought by now to have “gotten over” whatever happened to her.

In other words, she should have forgiven and forgotten. This is a perfect example of the toxicity of forgiveness culture – all of the burden to heal the wound falls on the victim. Forgiveness thus plays out like a cruel cage built to keep the meek and mild in their place.

Contemporary forgiveness models even offer a healthy-living angle, positing forgiveness as a kind of yoga for your emotions. Grudges and resentment, one catchy, poster-ready phrase tells us, is like “drinking poison and hoping the other person dies.”

You’ll feel better if you forgive people who’ve done you wrong, we are told. By its very nature, forgiveness is an act of denial. You acknowledge that you’ve been hurt and then somehow, some way (forgiveness peddlers never give out the exact recipe), you are magically unburdened of the emotional damage you just finished acknowledging.

Any abuse survivor (and I am one) can tell you that just getting to the point of saying “I was abused” out loud is the real and very tough battle. After you make it that far, forgiveness seems like a nice but improbable thing you might do some time, such as visiting Antarctica. The latter is just more doable.

Even Christians, who started this mess, are starting to speak out against the simplistic, shrug-it-off formulas offered by forgiveness culture. One contributor to ChristianForums.com describes her contempt for being a “doormat” and notes that “There is nothing in the Bible that says that forgiveness is good for the physical or mental health.” Forgiveness, she writes, is not a “commodity” to be traded by either givers or receivers.

Maybe the real message of the Prodigal Son story is that the pride of the show-off forgiver will always be served first. 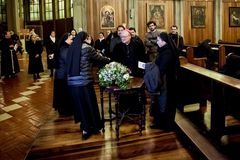 Review: Black Hollow Cage is about forgiveness and a wish to change the past
February 15, 2018