Not since Brian Mulroney rolled the dice on the Meech Lake constitutional talks has a Canadian prime minister gambled so much to push through their political agenda.

Justin Trudeau is coming to an inflection point of political risk – and in a matter of weeks, it could all blow up.

His Finance Minister, Bill Morneau, is essentially brokering the purchase of a pipeline project – a risky venture where success, according to conventional wisdom, is only a clear political winner in Alberta, a province where his Liberals have a near-zero chance of picking up seats in the next election.

The stakes, by Mr. Trudeau’s own public reckoning, are very high. It’s not just his pledge to get a pipeline to tidewater built that will be in tatters if the Trans Mountain expansion (TMX) does not go ahead. It’s his oil-patch strategy and a big chunk of investor confidence in Canada’s business climate.

The Prime Minister has always insisted his whole climate-change policy hinges on it, too – his formula was a grand bargain to both get resources to market and take action on emissions.

If TMX stops, that bargain will appear broken, and that will jack up the opposition to his plan to control greenhouse gas emissions through carbon taxes.

The PM’s pledge to advance both Canada’s resource economy and climate measures was seen by many as a facile way of pleasing everyone. It has turned out another way. Mr. Trudeau has been attacked on both sides and has found the middle increasingly hard to hold – yet, he’s still willing to take risks for it.

He’s got a lot on the line. And he’s now a PM with a slim lead in the polls and another dangerously simmering pot on the stove in the form of NAFTA talks.

NDP Leader Jagmeet Singh blasted the Liberals for offering to indemnify Kinder Morgan against risks to the project posed by B.C.’s challenges – he tweeted that it amounts to giving the company a blank cheque, but dumping the risks on Canadians. Imagine Mr. Singh’s reaction if Ottawa ends up buying the pipeline.

If Mr. Trudeau doesn’t save TMX, he’s got a disaster; if he uses public money to save it, he faces condemnation.

Public opinion suggests a similar conundrum: A Léger poll conducted earlier this month found 51 per cent think the government should intervene to support the Trans Mountain expansion, but only 30 per cent back the idea of putting public money into it.

The defeat of former B.C. premier Christy Clark, and successor John Horgan’s opposition to TMX sparked the current drama. His biggest climate ally, Ontario Premier Kathleen Wynne, is running third in an election campaign, amid discontent with her green-energy policies. If Doug Ford unseats her and Alberta United Conservative Leader Jason Kenney defeats Ms. Notley next May, Mr. Trudeau could be fighting a full-on federal-provincial carbon-tax war. If his energy-environment bargain has already blown up, he’ll have a hard time.

Of course, Mr. Trudeau didn’t plan for it to come to this. He didn’t know Kinder Morgan would trigger a crisis. But at many points, he could have cut the risk, softening his carbon-tax plan or distancing himself from the fate of TMX. He didn’t.

His squishy people-pleasing rhetoric makes some think Mr. Trudeau is soft, but he’s taking the kinds of risks that neither Jean Chrétien nor Stephen Harper embraced.

It could end up with triumph. But so many things can go wrong – financial negotiations, convincing Canadians the use of public money was justified and many other possible obstacles. But Mr. Trudeau has shown that the energy-environment bargain is something he thinks is worth wagering on and that he’s got the guts to do it.

Globe editorial: Investing in Canada? Relax. There’s insurance for that
May 16, 2018 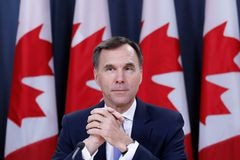 Opinion
Behind the curtain, Morneau is bargaining for a better price on the Trans Mountain pipeline expansion
May 16, 2018 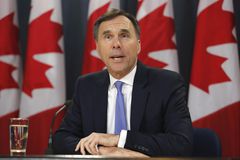 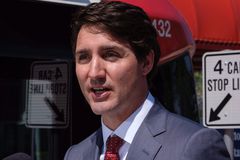