Back in 2018, amid continuing diplomatic tensions between Canada and Saudi Arabia, Saudi television and social media lit up with accusations about human-rights abuses in Canada. One commentator on Saudi TV called Canada one of the worst oppressors of women in the world. Social media accounts tweeted identical lines about missing women and about Canada committing “cultural genocide” against Indigenous peoples. These were rich accusations coming from a country where women were stoned to death for adultery and sought permission for everyday activities from male guardians, and Canada at the time largely paid no heed.

Less than one year later, however, Ottawa inadvertently validated all of these Saudi claims – and then some. After receiving the final conclusions from the inquiry into missing and murdered Indigenous women and girls, Prime Minister Justin Trudeau (after some initial wavering) eventually declared, “We accept the finding that this was genocide.” The 1,200-page report chronicled horrific accounts of forced sterilizations, family separations, violence, indoctrination and other forms of abuse.

That declaration should have been a watershed moment in modern Canadian history. The Prime Minister was acknowledging that genocide – one of the most heinous acts known to humanity – had occurred in Canada. If the Prime Minister truly believed the label was appropriate, and knowing Canada’s obligations as a signatory to the United Nations Genocide Convention, it should have meant swift legal proceedings and other measures as outlined in international law. Yet more than a year and a half later, the federal government hasn’t even delivered its promise of a national action plan to end violence against Indigenous girls and women. In effect, Canada declared itself a genocidal nation and then carried on as if nothing had happened.

Whether Canada’s abusive and exploitative treatment of its Indigenous populations indeed qualifies as “genocide” is a matter of continuing debate. But Mr. Trudeau nevertheless offered certainty as to what he and his government consider to be genocide less than two years ago when it accepted the conclusions of the MMIWG report.

And yet, when asked Tuesday about the evidence his government would need to see to consider the continuing persecution of China’s Uyghur Muslim minority “genocide,” Mr. Trudeau dithered. “It’s a word that is extremely loaded and is certainly something that we should be looking at in the case of the Uyghurs,” he replied. “We will continue to work with the international community and move forward on making the right determinations based on facts and evidence.”

The facts and evidence as they exist currently are years’ worth of reports, leaked files, surveillance imaging, first-person accounts and comprehensive investigations into the systemic persecution of China’s Uyghurs. Together, they chronicle how members of the minority group are being tortured, raped, imprisoned, sterilized, “re-educated” and forcibly separated from their families – that is, many of the same conditions outlined in the MMIWG report, which this Prime Minister and government agreed amounted to genocide. Yet now, according to Mr. Trudeau, Foreign Affairs Minister Marc Garneau and other members of the federal cabinet and Liberal caucus, when it comes to the plight of the Uyghurs, Canada isn’t so sure.

Certainly there are diplomatic considerations at play, including the continuing trade relationship between Canada and China and the fate of the two Michaels detained for more than two years in China. And so far, only the U.S. – first the Trump administration, and then current Secretary of State Antony Blinken – has applied the “genocide” label to China’s actions, which would make a similar declaration from Canada’s government a relatively lonely and particularly vulnerable one.

But the quagmire in which Mr. Trudeau now finds himself is even more complicated. By labelling his own country genocidal but declining to recognize what is patently genocide elsewhere, he has weakened the moral authority Canada has to censure China and other nations committing human-rights abuses by confessing to the worst human-rights abuse of all. Indeed, what pitch can Canada make to China now, considering the admission his government made back in 2019? From one genocidal nation to another – please stop what you’re doing? Do something about your genocide, and we’ll do something about ours?

If the Saudis were happy to use Canada’s abhorrent history with its Indigenous populations as a cudgel before, imagine the delight that China – or Iran, or Russia or whomever else – would have in adding the phrase “Canadian genocide” to its arsenal. To which this government will have no real defence. What right does Canada, an admittedly genocidal nation, have to lecture anyone else? 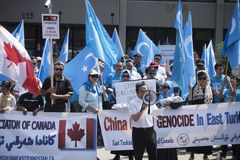