J.D.M. Stewart is a Canadian history teacher at Bishop Strachan School in Toronto and author of Being Prime Minister.

Many Canadians were alarmed, dismayed and gravely disappointed when they heard that Liberal Leader Justin Trudeau was forced to wear a bulletproof vest at an election rally last Saturday in Mississauga, Ont. In front of a crowd of about 2,000 people, Mr. Trudeau was not only wearing the vest but also was surrounded by much heavier-than-usual security. Many on social media have been asking: What’s wrong with the country? Are there people so filled with hate that Mr. Trudeau must wear a protective vest?

The truth of the matter is that all prime ministers – from John A. Macdonald to Justin Trudeau – have always been under threat. “Beware Old Man,” began one letter to Canada’s first prime minister, “The death of [Louis] Riel by hanging would be your own death. I give you fair warning, so beware. And if Riel is hanged prepare to appear before your own Creator without further notice.”

The chilling letter to Mr. Macdonald is not unique. Not long after the assassination of U.S. President John F. Kennedy in November of 1963, Prime Minister Lester B. Pearson received a macabre letter from a person in Thetford Mines, Que. “You know what happened to Mr. John F. Kennedy a short while ago,” the missive began, “well if you do not take any actions in order to give us a new national flag, you will also receive a bullet in your head like the president of the United States.”

Mr. Pearson did have one guard assigned to him in the days after Mr. Kennedy’s assassination, a security detail the prime minister reluctantly accepted. Two weeks later he asked for the guard’s removal, a request that was granted.

In the past, Canadians have had a very benign view of PMs and security, even when there were serious threats on the life of one of our leaders. Case in point: the 1995 assassination attempt on Prime Minister Jean Chrétien. A man wielding a knife was sitting outside of Mr. and Ms. Chrétien’s bedroom at 24 Sussex Dr. when Aline Chrétien opened the door and discovered the intruder. The RCMP were called – and infamously had to be summoned a second time by a frantic Ms. Chrétien – while the Prime Minister grabbed an Inuit carving of a loon in self-defence.

Despite the gravity of the incident, Canadian media made sport of it. Even The Globe and Mail got in on the act, joking that, “an Inuit bird in the hand is worth two RCMP officers in the bush.” A few years later, a man once more breached Mr. Chrétien’s security bubble and threw a pie in the PM’s face. It could have been much worse.

While all PMs have been subject to death threats, the permanent security around them we think of today (known as PMPD – Prime Minister Protection Detail) really only began during the Pierre Trudeau years in the late 1960s, a period of dramatic political unrest here and around the world. Threat levels increased. The 1969 Grey Cup game, for example, featured the largest security force ever at a Canadian sporting event, due to concerns about the safety of the PM during a turbulent time in Quebec politics.

Prior to that, security for a prime minister was connected to specific incidents, as was the case with Robert Borden, PM during the First World War, who needed a security detail after receiving a number of anonymous death threats in the mail because of the conscription crisis. And during election campaign rallies, security would always be around. In fact, RCMP officers had to escort a crowd of naked Doukhobor protesters from a John Diefenbaker campaign event in 1962 in Trail, B.C.

Security for a prime minister today is tight. If it is going well, most observers will not even notice its existence, which is exactly the way the RCMP want it. This is what makes the past weekend’s threat a bit unusual, with the highly visible uniformed officers. A message was being sent. Equally important, while threats in the past were fairly plain to see, a lot of what concerns the RCMP today comes from the dark corners of the internet, making the culprits more difficult to weed out.

But politicians know the terrain. They work closely with PMPD and develop friendships. They dismiss them, as Stephen Harper did, if they are not satisfied with someone. They know the risks, too. As far back as 1966, The Globe wrote in an editorial that, “It is an accepted fact by most men in public life that part of the price they pay is their vulnerability to those who, for thousands of reasons, might wish to focus their hatred upon them.”

Canadians remain fortunate that no attempt on the life of a prime minister has been successful. But it is also worth knowing that these incursions on a leader’s safety are, regrettably, not new and are most often kept out of the public eye. 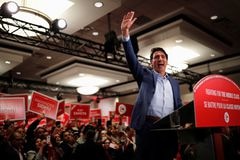