Andrei Sulzenko is a former trade negotiator and is currently an executive fellow at the School of Public Policy, University of Calgary

Imagine a conversation between President Donald Trump and his hawkish trade advisers.

“I need to do something big to fulfill my election promise to get tough on trade! So far, I’ve received no credit for trade actions, and some have flubbed like helping Boeing against Bombardier. I wanted to dump NAFTA, and everyone went ballistic, especially my main fundraisers, even though it was really meant to be a negotiating ploy.”

“Mr. President, unfortunately our trade remedy legislation is based on due process, even if we do our utmost to turn dubious cases into America First outcomes.”

“I don’t care! Give me something I can do without so-called due process on my back, as well as those free-trader turncoats in Congress threatening to overturn everything I want to do.”

“Well, Mr. President, there is an obscure piece of legislation that has been rarely used, giving you carte blanche to do almost anything in the name of national security. Even the World Trade Organization allows it under certain circumstances.”

“Give me some of that! What can we use it against? I know – steel and aluminum. The military needs lots of it, and isn’t Chinese overcapacity hurting our mills?”

“Yes, Mr. President, but China is one of the smallest exporters to our market and can hardly be responsible for disruption. Besides, the American economy is booming, and our mills can’t keep up with demand.”

“So, who are the biggest exporters?”

“Canada, Brazil, Mexico and Russia are by far the biggest. China is a distant eleventh.”

“That’s great! We can cover China by implementing across-the-board tariffs and pressure Canada and Mexico on NAFTA at the same time. It doesn’t hurt to take a bit of a run at Russia either.”

“Problem is, Mr. President, that we probably shouldn’t be taking action in the name of national security against defence allies, like Canada, South Korea, Japan and the Europeans.”

“I’m not troubled by that! They’re not doing enough of their own spending on defence. We should remind them of that when we apply tariffs on their steel.”

“Well, Mr. President, you should consider providing some countries with exemptions in recognition of their roles as allies. That gives you ultimate flexibility as the great negotiator and should temper the backlash here and abroad.”

“I like that! Have everyone come cap-in-hand looking to be exempted, and then extract concessions in exchange. At the end of the day, we may just hit Russia, China and a few others we don’t like.”

“It would be useful, Mr. President, not to drag that process on too long in case other countries retaliate with duties of equivalent value on our exports, like motorbikes and blue jeans. After all, even though our legislation permits your action, it will be seen to be transparently offside international rules, and the World Trade Organization will likely legitimize retaliation.”

“Although we would never say so publicly, a trade war will hurt everyone, Mr. President, including the United States, probably more than the steel and aluminum tariffs help our industry. All the steel- and aluminum-consuming industries, like automotive, will be faced with higher prices that they will then try to pass on to consumers, and industries subject to retaliation will also be hurt.”

“Details, details. Are you suggesting I shouldn’t go ahead with this?”

“No, Mr. President, you’re playing the long game and need to show everyone who’s boss. This is as good a way as any to do it. Besides, there is no real good alternative to recommend in using national security as an excuse.”

“All right, let’s do it! And then I want to talk about who we’ll hit next. There’s not much to do about NAFTA right away. We might actually get a deal, and in the meantime it’s fun messing with Mexico on the wall and with Canada on who actually has the trade deficit.”

“Mr. President, we have told you many times that Canada has always had a trade deficit with us, especially when we take trade in services into account.”

“Yeah, I know, I know, but that doesn’t play into the narrative for my electoral base. Besides, if I admitted it, the Canadians could argue that we needed to make concessions to reduce their deficit. Better to use alternative facts.”

“Mr. President, we should talk about what to do about China. You actually have legitimate grievances, particularly on their constant flouting of intellectual property rules. The rest of the world will applaud you for getting tough on that.”

“Okay, let’s put that in our gun sights. Probably should have led with that before steel, but I wanted to help elect our guy in Pennsylvania. Too bad he lost, but the steel tariffs and my stump speech helped make it close.”

“We’ll put together a China package as soon as possible, Mr. President.”

“Good, and keep it simple. Intellectual property is too complicated for me to understand easily, and what I don’t understand I can’t communicate.” 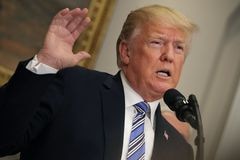