If the best day of your presidency is finding out that you have not committed serious felonies, Democrat Eric Swalwell said on CNN, you "shouldn’t be taking a victory lap.”

Maybe so, congressman. But given the clearance accorded to Donald Trump on the biggest threat overhanging his ramshackle presidency, get ready for Trumpian triumphalism for months to come. Victory laps and cartwheels, a conga line snaking through the streets, Mr. Trump and Lindsey Graham up front, Sean Hannity on the tuba.

Get ready for glee and for vengeance against your party as well. Hardly a surprise. After two years of investigation, no weapon of mass destruction uncovered.

Washington's abuzz with talk that this could be the turning point of the Trump presidency. It’s well possible. The main weapon for the Democrats in their bid, as some liked to put it, to bring down the clown, was the character issue. The Trump person, not the policies. Establish that a whack job was running the country. Worse, that it’s a criminal presidency.

With that hope all but gone, what do the Democrats do now? Some are talking about making the economy the issue. That would be an economy that is in strong condition, that has romped along since Mr. Trump came to office, that is his chief boasting point.

There’s immigration. That won’t do it. Too many Americans want barricades, if not the wall itself. Climate change? Not unless there are monthly tsunamis from now till November, 2020. Foreign policy? Wars have been scaled down, external threats such as North Korea and the Islamic State diminished.

Health care? On this there’s some hope because the Republicans, breaking a promise, have reduced health care funding. But if the Democrats go too hard on this issue, they play to the socialism-at-the-gates bogeyman.

It’s been a presidency on the defensive. Now Mr. Trump and his Republicans have been handed a sledgehammer to go on the attack. Now they warn of a possible investigation to pursue those responsible for the so-called witch-hunt. They want revenge on the President’s smear-meisters, the deep state’s ringleaders who sought to bring him down.

It all might be very premature. The President faces investigations in other jurisdictions. The full Mueller report isn’t even out yet. In the hundreds of pages in the actual report, much damning evidence against the President could emerge, especially on the question of obstruction of justice. Mr. Mueller left the guilt door open on that question but Attorney-General William Barr, a Trump appointee, closed it, saying there was insufficient evidence to make an obstruction accusation.

As House Judiciary Chairman Jerrold Nadler put it, the Attorney-General’s summary of the report was a "a hasty, partisan interpretation of the facts.” Given Mr. Barr’s previous assertions the die was cast. In his confirmation hearings, he argued that the Constitution offers the president broad protections. To conclude, he said, that Mr. Trump acted “corruptly” by influencing a proceeding in which his own conduct is scrutinized is “untenable.”

Given the many legal grey areas on obstruction cases, it could become a hairsplitting debate. Democrats will be hit with charges of sour grapes should they pursue such matters. Their best hope might be to leave the Russia issue be unless a new devastating finding appears.

Along with the Democrats, the Republicans are predictably targeting the media as well. Writing in the Daily Mail, long-time Trump defender Piers Morgan says “Once revered newspapers like The New York Times and Washington Post are effectively finished as credible purveyors of fair and balanced news.”

It’s an absurd statement but an indication of the vindictive mood. Mr. Trump’s cries of fake news will now carry more weight than ever before. His base will be more rabid than ever. His poll numbers can be expected to rise, perhaps appreciably.

In bludgeoning the Democrats, former Trump strategist Steve Bannon says to expect Mr. Trump to “come off the chains.”

It’s hardly like he hasn’t been off it already. But therein lies a hope for the Democrats. Power will now flow to his head so much that, straitjacketed in his megalomania, Mr. Trump will cross the line, do something that finally brings on the hell that he has always been so fortunate to avoid. 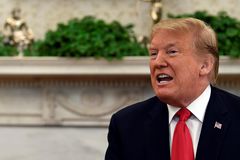 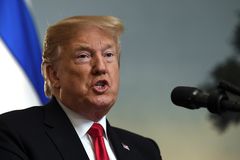