It’s telling that Vancouver’s outgoing mayor has a much more difficult time pinpointing his favourite day in office than his worst.

But after a moment of reflection, Gregor Robertson decides the final day of the 2010 Winter Olympics was one he’ll cherish forever. Canada had won hockey gold thanks to Sidney Crosby. The downtown core was a moving ocean of red and white, as tens of thousands of Mr. Crosby’s fellow citizens, celebrated a historic Olympics.

I would have thought picking his worst day would have been a tougher assignment, only because there have been so many more over the course of his decade in office. But forced to choose, Mr. Robertson decides on the Friday morning in December, 2016, when he awoke to the news that nine people had died the previous evening from fentanyl-related overdoses. The city’s opioid crisis had hit a brutal low.

There isn’t a mayor in the country who has had to deal with the raft of vexing issues that Mr. Robertson has. The financial crisis of 2008 created critical funding issues for the developer of the Olympic housing project. The city had to assume control (shortly after Mr. Robertson took office) and ultimately made the best of a horrible situation. That alone would have made the top of any mayor’s list of most difficult situations with which he or she had to deal. But that was only the beginning.

In June, 2011, Mr. Robertson watched as his city was turned into a war zone, following the final game of the Stanley Cup finals. The riot that broke out made international headlines and left a horrible black mark. At the same time, the mayor was dealing with a homelessness crisis, which would be followed by a housing crisis, which would be followed by an opioid crisis.

I realize the word crisis is thrown around too easily sometimes, but in this case it is entirely appropriate.

Still, among those trials, the one that will mostly likely stain Mr. Robertson’s legacy is housing.

It was on his watch that the city’s housing affordability emergency unfolded. When people began sounding the alarm about the influence of foreign investors, mostly from mainland China, Mr. Robertson didn’t like what he felt was a racist undertone to the discussion. People accused him of sticking his head in the sand. Many of these same investors took advantage of massive loopholes in a poorly regulated real estate industry to buy up property at a stunning rate, sending prices through the stratosphere. The development industry, which the mayor’s critics said he was far too cozy with, started building high-priced, luxury condominiums for the super-rich.

Meantime, there was not enough rental accommodation to house people of average income. It was a nightmare and, in some ways, still is.

Mr. Robertson says he tried to alert the then Liberal government in Victoria and Conservative government in Ottawa to the emerging disaster, but to little avail. He now says maybe he wasn’t loud and abrasive enough. That he wasn’t able to command the federal government’s attention, he says, in the same way that former Newfoundland premier Danny Williams once did around his province’s concerns. If he’d had a little more of Mr. Williams bluster and bravado, maybe governments that had the power to do something about the situation might have stepped up far earlier.

But by the time Victoria brought in a 15 per cent foreign-buyers tax, and the city of Vancouver was given the power to bring in an empty home tax, the affordability emergency was too far gone to be remedied.

“We were faced with a perfect storm,” Mr. Robertson told me in an hour-long chat in his office. “And it was way beyond what any city has faced in a short blast of time.”

While he accepts that he will wear the housing crisis more than any other politician who touched the file, he believes history will ultimately be a kinder judge of his legacy. Over the decade in office, Mr. Robertson says his administration built more housing than in any 10-year period in the city’s history. That includes far more rental accommodation than has ever been constructed. The economy has led major cities in the country for the past five years, he says. Big businesses are setting up shop in the city, including high-tech firms. The city is greener.

“We’ve done some stuff that won’t be realized or appreciated for years down the road,” he says. “But I’m content that I tried my best, dealing with an unprecedented number of difficult files.” 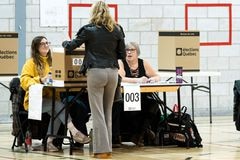 LNG project may force BC Greens to show their true colours
September 28, 2018 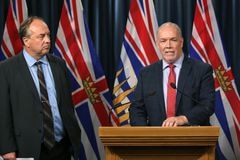 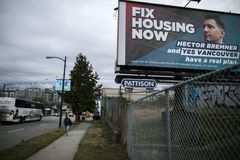