One of the things I like about living in Europe is the low cost of high tech. Cellphone service, for example, costs a fraction of what it does in Canada or the U.S. – we get a data plan for our whole family, from one of a dozen providers, for considerably less than an individual plan in Canada. Same with home broadband, which costs US$37 a month in Germany and US$31 in France on average, compared to US$58 in Canada or US$68 in the United States. And airline tickets are much cheaper here than in North America.

Those three observations – the lower costs of cellphone service, broadband and air travel in Europe compared to the United States, and the fact that all three were cheaper in North America 25 years ago – were the starting point for years of study by Thomas Philippon, a French economist at New York University.

His conclusion, in his forthcoming book The Great Reversal, is that it’s true across most of the economy: In general, Europe has become a place where capitalism is much more competitive, and markets much more free and open, than in North America – to the benefit of both consumers and workers.

Dr. Philippon asks: “How did Europe, of all places, become more of a ‘free market’ than the U.S.?” His answer has important long-term implications for voters and policymakers in both the United States. and Canada.

North American governments have come to believe that big, market-dominating companies should be allowed to flourish and survive under all circumstances – to create internationally competitive winners, to secure jobs in their provinces and states or just because they donate generously to political parties.

Europe, as everyone knows, has a bigger role of government in business – but that role, for a long time, has been to prevent the formation of monopolies and ensure that capitalism is competitive, open and easy to enter. “The fight against market dominance,” Dr. Philippon writes, “has been part of the DNA of the European project from the very beginning.”

And that distinction has made Europe a place with a lot more private-sector competition – for prices, for better customer service, for higher wages, even, in some sectors, for more ecological and sustainable products.

“Starting around 2000,” he concludes, “profit rates and concentration ratios [that is, monopolies] increased in the U.S. but remained stable or decreased in Europe. Prices relative to wages increased by 8 per cent more in the U.S. than in Europe despite similar productivity growth. As U.S. markets experienced a continuous decline in competition, European markets did not. Today many European markets appear to be more competitive than their American counterparts.”

In a profound change in Europe, it’s become a lot easier for people – including recent immigrants – to start small businesses. If you wanted to open a small business in France in 1999, it required 15 procedures and 53 days. But by 2016, it required only a couple of procedures and four days. Over the same period, however, the time to open a small business in the United States rose from four days to six. The same pattern applies across many other business indicators. The French, it turned out, did have a word for “entrepreneur,” but the Americans forgot it.

In the United States, he concludes, “the consequences of a lack of competition are lower wages, lower investment, lower productivity, lower growth and more inequality.” By Dr. Philippon’s calculation, the lack of competition in the U.S. has cost workers US$1.5-trillion in income, or about six years of wage growth.

In Canada, there are very few barriers to creating a small business (it takes two days). On the other hand, the way Canadian governments treat and regulate big corporations is a lot closer to the American model.

You won’t see European Union-style antitrust actions against Google or Microsoft taking place in Canada. In Dr. Philippon’s initial three cases – mobile phone service, home broadband and airlines – Canada is often less competitive or consumer-friendly than the United States. Canada’s cable and telecom giants are given extraordinary latitude to exploit and neglect their customers in a near-monopoly setting. Its transportation sector is closed and expensive. Resource and engineering companies are frequently seen as “too big to fail” and bailed out or permitted to have competition-crushing market share in Canada. The SNC-Lavalin scandal, which ruptured the federal Liberal Party this year, was at its root a government’s alleged effort to protect a huge company’s uncompetitive practices for electoral gain.

We should not be looking at life as a choice between big, activist government or a successful market economy. To achieve the second, we need more of the first.

Doug Saunders, the Globe’s international-affairs columnist, is currently a Richard von Weizsaecker Fellow of the Robert Bosch Academy in Berlin. Opinion
Germany shows us how to thrive in an economic downturn
Subscriber content
October 4, 2019 Opinion
‘Havana Syndrome’ was a test of how Ottawa treats its diplomats. It failed
Subscriber content
September 27, 2019 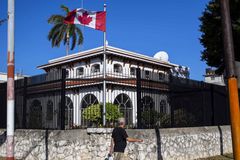