Mark Tyndall is a public health physician, an advocate for people who use drugs and a Professor at the UBC School of Population and Public Health.

After five years of an increasing number of drug poisonings, 2020 is on pace to be the worst year in history for such deaths in Canada. And while COVID-19 is often blamed for the recent surge, the drivers of the overdose epidemic were in place well before the pandemic.

Entrenched stigma and general indifference to the plight of people who use drugs are at the root of our inaction. But the overdose crisis has also become entangled with poverty, homelessness, racism, sexual violence and hyper-incarceration. Drug use and addiction are tied up with these social issues, but are not responsible for them. In fact, my work with people who use drugs has taught me that people often use drugs just to survive these injustices.

Our approach to drug use and addiction is completely backward. We continue to prioritize abstinence-based programming and leave the most vulnerable people to figure it out for themselves. We champion something called “recovery,” and make it sound attainable to anyone who has the fortitude and support to overcome their addiction – but tell that to the friends and families of the 16,000 Canadians who have died of drug poisoning in the past five years.

At this stage, we are left with only one ethical response to this crisis: offering drug-dependent people access to a safer regulated supply.

The concept of a safer drug supply is not complicated. Instead of leaving people to purchase drugs that emanate from profit-driven criminal drug cartels and that travel through an underground network of low-level suppliers, the government would offer drugs of known quality and potency in a regulated program. There are many ways to provide a safe drug supply, but scalable solutions must go beyond physician prescribing and pharmacy dispensing. This is a public health crisis, and requires a public health response. In the immediate term, the goal is to reduce drug poisonings, not to solve addiction.

There would be two direct outcomes from a safe supply program. First, there would be a dramatic decrease in drug overdoses; substituting drugs with known potency to replace the unpredictable and toxic drug supply would effectively eliminate unintentional drug overdoses.

It would also relieve people of the daily grind required to procure money to purchase drugs at extortionate prices, leading to less anxiety and more stability. People would have time to reconnect with family, seek medical care, find housing, and ultimately reduce their dependence on drugs. At a community level, this would result in a significant reduction in criminal activity and social chaos, since a good deal of petty crime, shoplifting, survival sex work, and car break-ins are related to people’s daily efforts to obtain illicit drugs.

For those who are unmoved by the human tragedy of the overdose crisis, or feel that correcting our failed drug policies are too risky, consider the economic cost of doing nothing. Using data from 2015 to 2017, the Canadian Substance Use Costs and Harms Report estimated that the opioid epidemic cost Canadians $6-billion per year, or about $177,000 per opioid user when you add up the cost of the criminal justice system, health care, and lost productivity.

So we must move beyond empty platitudes, hollow promises, and underfunded pilot projects. More of the same complacency ensures that thousands more will die because of drug prohibition and the ongoing exposure to toxic drugs. Our failure to take bold steps ensures that the drug poisoning crisis will continue for years to come. 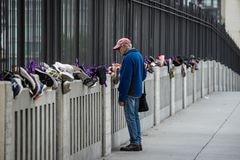