Thirsty? How about a tall, cool glass of polypropylene, nylon and polyethylene terephthalate? Microscopic bits of those plastics were found in bottled water sold by 11 brands including Dasani, Evian and Aquafina, according to a study released last week by the State University of New York.

Enlisted by the nonprofit journalism foundation Orb Media, professor Sherri Mason tested more than 250 individual bottles from nine countries (not including Canada). While a few had “effectively” no plastic, others contained thousands of invisible particles. One bottle, sold by Nestle Pure Life, had more than 10,000 particles a litre.

Now, there’s no evidence that microplastics – which measure less than five millimetres in length and are often much more tiny – affect human health. The Orb report quotes a 2016 study by the European Food Safety Authority that as much as 90 per cent of the microplastics we consume might pass through our digestive system entirely.

That leaves a mere 10 per cent that, according to the study authors, might possibly “lodge in the intestinal wall … travel through the body’s lymphatic system” or “enter the bloodstream before it lodges into the kidney and liver.”

Although that sounds awful, microplastics “don’t build up inside of us. They don’t cause blockages,” says Dr. Mark Hanson, a professor in the department of environment and geography at the University of Manitoba.

The eco-toxicology expert has observed microplastics in both the Red River and Lake Winnipeg. “If people are worrying about human-health outcomes in terms of incidental ingestion of these things … right now there’s no evidence that anything adverse would happen,” he says.

That said, Dr. Hanson isn’t a fan of plastic waste. Birds and other animals do choke on big pieces of the stuff when they mistake it for food, he says, and litter along waterways, or anywhere, is still ugly.

And while the level at which minute plastic particles in water would affect marine life, other animals or humans is not known, we can’t ignore it, Dr. Hanson says.

“We don’t want to have our heads in the sand,” the risk assessment specialist says. “We want to make sure we’re in front of issues where we’re tackling things before they become a greater problem.”

Thursday is World Water Day, as good a time as any to consider how to keep microplastics out of our water. Avoiding synthetic fabrics could help: In early March, the conservation organization Ocean Wise found that artificial textiles were the origin of 90 per cent of microplastics in the Pacific off the coast of Vancouver, likely owing to laundry wastewater.

On the positive front, this year, Canada begins phasing out products containing microbeads, little pellets that contribute to foaming in toiletries, then make their way to the bottoms of oceans and riverbeds.

And Catherine McKenna, the federal Minister of Environment and Climate Change, recently pledged to use Canada’s presidency of the Group of Seven to push ambitious plastics recycling targets.

That’s not bad, but we also need to stop making it in the first place, since production and recycling of plastic products requires water, too. Never forget that the three enviro Rs – reduce, reuse, recycle – are listed in preferential order.

It’s hard for humans to absorb, but often, the best thing to do for the planet is to not do anything in the first place. In Dr. Hanson’s words, “the more we can sort of reduce our influence on the water … the better off we’re going to be.”

Which is why bottled water is a problem: While many of the country’s lakes and rivers do contain microplastics, the concentration in natural bodies of water is dramatically lower than in the packaged liquid.

“When you’ve got things being cut off and lids being twisted on and you’re in an environment that has all sorts of little plastic dust from other manufacturing, there’s going to be particles in that bottle,” Dr. Hanson says.

“It wasn’t from the water itself,” he says of the particles found in the State University of New York study. “I worry sometimes that that message isn’t clear.”

Orb estimates that 2.1 billion people worldwide lack easy access to a clean source of water: For them, bottled water is a necessary, hopefully temporary, evil. For everyone else, drinking plastic is a serious bad habit, but at this point, it’s not too late to kick it.

Should we ban the plastic water bottle?
November 1, 2017 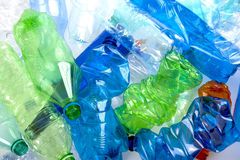 Clean your water bottle: study finds bacteria in water storage containers
August 7, 2017
Follow Denise Balkissoon on Twitter @Balkissoon
Report an error Editorial code of conduct
Due to technical reasons, we have temporarily removed commenting from our articles. We hope to have this fixed soon. Thank you for your patience. If you are looking to give feedback on our new site, please send it along to feedback@globeandmail.com. If you want to write a letter to the editor, please forward to letters@globeandmail.com.
Comments are closed