Justin Trudeau spoke proudly, defiantly on behalf of Canadians. “We are polite and reasonable,” he said at the G7 summit. “But we will absolutely not be pushed around.”

A noble thought. But guess what? He is being pushed around and there’s not much he can do about it. Donald Trump’s got howitzers. He’s got pop guns.

It’s here, an economic confrontation, a bilateral donnybrook the likes of which has not been seen in decades. The Diefenbaker-Kennedy feud of the 1960s was over defence issues. To find a trade crisis of potentially worse magnitude than today’s requires going back to the Smoot-Hawley tariff war of the 1930s. Today’s upheaval has a wild card others did not; an impulsive titanic ego in the Oval Office relishing the role of schoolyard bully.

At the G7, Mr. Trudeau decided to take him on. It backfired. In saying he wouldn’t be pushed around and in calling the President’s actions “insulting” – even though they were insulting – he went too far.

Prime ministers have never publicly rebuked presidents this way. They’ve always couched their language. The criticism, though similar words had been used before by the PM, set off Mr. Trump’s hair-trigger temper. So much so that he condemned Mr. Trudeau calling him “very dishonest and weak;” so much so that he sabotaged the summit by refusing to sign the wind-up communique; so much so that he rocked the international trading regime with more dire threats.

In his temper tantrum aboard Air Force One, Mr. Trump said of steel and aluminium tariffs he levied against Canada that, “Our tariffs are in response to his of 270 per cent on dairy.” That was odd. Before he said the tariffs were in response to his concerns for his country’s national security. Now, he was saying that dairy products were the problem. That such a heavy toll on U.S. defence preparedness could be inflicted by tariffs on sour cream, cheese dip and the like was previously unknown.

When Mr. Trump complains of Canadian tariffs, he doesn’t mention his country’s 350-per-cent levy on smoking tobacco or its 130-per-cent one on peanuts or the quotas on sugar imports or the Buy America laws, hindering Canadian companies from bidding for American contracts.

As for economic adviser Larry Kudlow’s accusation of the President being stabbed in the back by the Prime Minister, Mr. Trump had privately promised Mr. Trudeau on three occasions that Canada wouldn’t be hit with the steel tariffs. It’s the PM who has the back wounds.

Any hope of a removal of the steel tariffs seems gone. Now, if Ottawa doesn’t bow and kowtow, it faces the threat of crippling auto import tariffs, not to mention the demise, given the failure of the renegotiation process, of the continental free-trade accord.

Ottawa now has precious few cards to play, a Canadian insider involved in trade negotiations told me. If it tries further retaliatory measures on top of its steel and aluminum ones, it risks further Trump reprisals. The big dog has all the advantages. While only 16 per cent of U.S. exports go to Canada, 72 per cent of Canada’s go south.

Mr. Trump is untethered – even more so than he normally is. If there’s a trade war he says, rolling out the bluster, “We win that war a thousand times out of a thousand.” With his polls going up and the Singapore summit about to take place, he is feeling his oats. He is convinced that by going strong on America First measures he can arouse his base and win the midterm elections.

Ottawa’s position has a lot of support in the U.S. Congress. Republican senator John McCain tweeted in respect to Canada and other allies that, “Americans stand with you, even if our president doesn’t.” Democratic party senate leader Chuck Schumer sarcastically asked, “Are we executing Putin’s diplomatic and national-security strategy or AMERICA’S?” But Mr. Trump doesn’t need Congressional support for many of his trade actions.

At home, Mr. Trudeau can expect a good deal of support, at least in the short term, for his firmness with this President. But Mr. Trudeau has to somehow get bilateral relations back on the rails. An extended trade war heading into next year’s election isn’t an option.

The first order of business will be for him to try and set up a face-to-face with Mr. Trump. Peace talks are the priority. 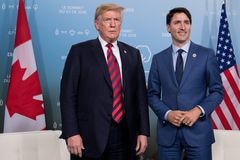 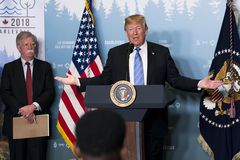 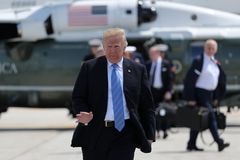