One year ago, the world was shocked by the tragic downing of Ukraine International Airlines Flight 752 (PS752) in Iran, killing all 176 people on board. Many of the victims were Canadian citizens or permanent residents; dozens were students or staff at Canadian universities and colleges.

The tragedy’s emotional toll only intensified as it became clear, days later, that the flight had been shot down by a missile fired by the Iranian Islamic Revolutionary Guards Corp. On top of the ample grief, there was now anger and disillusionment, especially among the more than 200,000-strong Iranian-Canadian diaspora.

Canada’s outpouring of support in the aftermath, however, was remarkable. What I witnessed was akin to a close-knit family’s reaction to the loss of a loved one; it was heartfelt, broad-based, multifaceted and generous, with Canadian governments at all levels supporting affected families and the community.

Numerous vigils and memorials were held across the country, while countless Canadians donated to a variety of related causes. The Canada Strong Foundation, under the leadership of Mohamad Fakih, raised approximately $3.3-million, including $1.5-million in matched funding from the federal government to support victims’ families. The province of Ontario announced a $10,000 annual scholarship in the name of each of the 57 victims who were Canadian citizens.

Our university campuses, many of which lost students and faculty members, held vigils and offered counselling services. The University of Toronto, Queen’s University, the University of Ottawa and the University of Alberta created scholarship funds to keep alive the legacy of those who perished by providing individual and corporate donors with an opportunity to channel grief in a positive way. A number of deserving students have already received scholarships as a result of these efforts, and the positive effects will only grow as more people continue to donate and as universities continue to generously match funding.

This is part of a legacy of generous Canadian responses to tragedies. Canadians opened their homes to strangers who were stranded after the 9/11 attacks and to families of Swissair Flight 111, which crashed off the coast of Nova Scotia in 1998. Canada had an outsized contribution to relief and rebuilding efforts in the aftermath of the Indian Ocean tsunami in 2004, which killed more than 220,000 in a dozen countries. The list goes on.

Some have argued that the Air India crash of 1985 and Canada’s response to it may have served as an awakening of sorts, helping us adopt a more inclusive national identity in its aftermath. This, they cite, may have influenced our national response to the incident in Iran. Whatever the cause, these moments, and the discourse on racial and Indigenous issues, demonstrate that Canada is progressing toward an ever more inclusive and equitable nation.

As for flight PS752, work is still continuing to seek justice for the victims and their families. Affected families continue to need moral, financial and emotional support. Many are unable to work as they grapple with emotional and psychological trauma. They have formed an association to seek support and engage others in advocating for justice. Victims’ families and many others want Canada to stay the course to ensure that a credible international investigation is completed and that those responsible are brought to justice.

The recent report to the government by the Hon. Ralph Goodale shows momentum in this direction, but it also observes that “there is still a long road ahead before we get to the transparency, accountability and justice the families need and deserve.” The response from the Association of Victims’ Families recognized the report’s significance, but the group is still seeking clarification on the government’s next steps.

The fact that Canadians are prepared to stand up for each other and justice around the world speaks to our core values. We are, on balance, a pluralistic society proving the notion that unity and diversity are not mutually exclusive. The fact that many of the victims’ dual-citizenship status did not detract from our response speaks of how closely we hold these values.

Human beings are members of a whole

In creation, of one essence and soul

When the conditions of the time bring a member pain

Others cannot rest easy or refrain

As an Iranian-Canadian, I’ve seen this mantra at work in my adopted land better than anywhere on earth. And for this, I feel blessed and grateful. 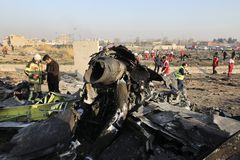