Randy Boswell is a journalism professor at Carleton University.

I wish to confess a terrible, unfathomable driving error that could have cost many lives.

I got thinking about it during the sentencing hearing for the truck driver who caused the horrific Humboldt Broncos bus crash last April that killed 16 and injured 13. The Crown has requested a prison sentence of 10 years for Jaskirat Singh Sidhu, who spared everyone a painful trial by admitting that he drove through a stop sign, unleashing all of that misery.

What strikes me about such a catastrophe is that it could have been me – could have been any of us, really – behind the wheel. We’re all human and we all make mistakes, as some of those grieving in Saskatchewan have acknowledged.

And some of us make mistakes that, in different circumstances, could have been catastrophic. In my case, it’s not purely hypothetical.

About 10 years ago, I was driving south on Highway 416 about 65 kilometres from Ottawa. It’s a divided highway – two southbound lanes separated from two northbound lanes by a strip of trees.

I was in the right-hand lane when I spotted something strange lying just off the left-hand shoulder, along the edge of the trees. It might have been a deer, but it seemed bigger. And was that movement I glimpsed or just the wind? I pulled carefully onto the right-hand shoulder and waited for a break in the traffic coming behind me.

Then, inexplicably, I made a U-turn heading north in the southbound lanes. I steered my car to the right side (that’s the left-hand passing lane for cars coming south) and began driving back to have a look at that curious object I’d passed a few hundred metres back.

God knows what I was thinking. Somehow, perhaps because the trees screened out the northbound traffic, I had mentally transported myself to some two-lane, bidirectional secondary highway.

Tired? Perhaps. Distracted? Yes, I suppose, by that animal (or whatever) on the side of the road, and by thoughts of the ailing parents I was heading home to visit near Toronto.

But that’s no excuse. I still shudder when I think of it: I was going the wrong way – north – in the fast lane of a busy, southbound, 400-series Ontario highway.

For about one very dangerous minute, I persisted as a line of cars passed immediately to my left – some honking their horns, others moving briefly into “my” lane before seeing my car coming head-on and veering back into line behind the other bewildered drivers.

I slowed down, thinking there must be something wrong. I gradually eased my car onto the shoulder to my right and came to a stop.

It took a few more seconds for the truth to sink in. Then I spent several minutes trying to understand what had just happened. I have an excellent driving record, but this baffling aberration – I pray it was a once-in-a-lifetime blunder – could have wiped out a whole family, or worse.

Eventually, I gathered my wits. I waited until I was alone on that stretch of road and did another U-turn – this one southward, in the right direction.

I drove on, but I was shaken. And I began to worry that some of the motorists I’d passed – and terrified, no doubt – would have alerted police to the perilous actions of a wrong-way driver on the 416. Would police be diverted from other duties looking for me?

I pulled into a rest stop and called the cops. I explained that they’d probably had reports of a wrong-way car on Highway 416, and that I was the driver who’d made this life-threatening mistake.

Whoever took the call asked me to wait, and that an officer would come soon to discuss what had happened. I waited an hour, then two. I called back, and the dispatcher said the detachment had other priorities. I was thanked for alerting police and told to go on my way.

It’s the obvious cliché in the wake of Humboldt, but it seems right and only fair for me to say: “There, but for the grace of God, go I.”

I feel for the dead and the injured, for their families and friends.

But I feel for Mr. Sidhu, too. And I can relate; I suspect many of us can.

On a day this week when the hockey moms and dads were giving their victim-impact statements in Saskatchewan, I was driving home from a pickup hockey game in my Ottawa neighbourhood.

A huge snowplow moving fast blew through a four-way stop at the end of my street. I had begun turning in front of the massive machine when I sensed its driver wasn’t going to brake – so I slammed on my own brakes just in time.

He would have crushed my car … but for the grace of God. 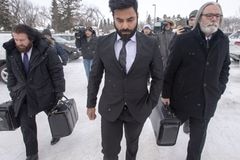 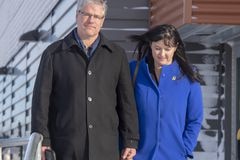