David Shribman is the former executive editor of the Pittsburgh Post-Gazette and winner of the Pulitzer Prize for coverage of U.S. politics. He teaches at McGill University’s Max Bell School of Public Policy in Montreal

Trillions for COVID-19 relief. Trillions more for an infrastructure initiative. Yet another burst of US$1.52-trillion for “discretionary” programs such as housing and education. A boost in corporate taxes. An offensive against firearms. The first elements of a comprehensive plan to address climate change.

It is a breathtaking agenda, a veritable trill of the trillions, laid out at a breathtaking pace, positioning Joe Biden to record a First Hundred Days unlike any presidential predecessor except Franklin Delano Roosevelt and perhaps Lyndon Johnson and Ronald Reagan, all coming amid a pandemic, a frantic drive to vaccinate a profoundly divided country against a deadly disease and a gathering crisis at the border with Mexico.

But in the contemporary First Hundred Days, the standard measurement of early presidential achievement that in the Biden case ends April 30, one persistent, and vital, mystery lingers, a consequential question that will determine the course of the next several years and will shape the 46th President’s place in history:

Has Mr. Biden – who came to the White House as the avatar of moderation, the spokesman for unity and the exemplar of bipartisanship – changed?

The man whose standard mode of ground transportation once was a 1967 Corvette Stingray with a V8 engine and four-speed manual transition now is conveyed in a 9,000-kilogram Cadillac presidential limousine with 20-centimetre exterior walls. And like that hermetically sealed roadster with run-flat tires mounted on a GMC TopKick truck platform, Mr. Biden is barrelling ahead, troubling some of his onetime allies who expected more than the surface outreach to Republicans that thus far has taken its form mainly in meetings over coffee in the White House.

Is he the lifetime politician who, in the words of a Republican senator who served with him, “never had deep convictions” and has “become a vehicle for advancing an extremely damaging radical program”? Or is he the same old-shoe Joe whose gyroscope invariably leads him to the centre of his party if not exactly the centre of American politics?

“He’s pushing a little harder than the old Joe Biden used to push,” said James Butkiewicz, an economist at the University of Delaware in the President’s home state. “He wasn’t always so one-party oriented. And he was a little more moderate than he is now. He’s going farther on spending than he once did.”

But the man who began his career in a Senate that overrode Richard Nixon’s veto of the War Powers Resolution with bipartisan determination – 25 Republicans joined 49 Democrats to enact that landmark measure – now faces a 50-50 Senate where not a single Republican supported his virus-relief bill. The convert to climate activism, who in his first year on Capitol Hill was one of the lawmakers who supported the Endangered Species Act in a unanimous 92-0 vote, faces deep skepticism for his embrace of elements of the Green New Deal.

“He’s the same guy, impeccably honest,” said former Republican senator Lowell Weicker of Connecticut. “I liked him then and I like him now. But this is a particularly difficult time to govern and politicians have to make adjustments.”

Indeed, Mr. Biden is operating in a political world that has changed utterly since he first went to Washington in the Nixon years, when Tim Foli played shortstop for the Montreal Expos and Tony Orlando and Dawn’s Tie a Yellow Ribbon Round the Ole Oak Tree was being played on the radio.

“Like any competent politician, President Biden has changed to reflect the electorate,” said Stephen Farnsworth, director of the Center for Leadership and Media Studies at the University of Mary Washington in Virginia. “What worked for a Democrat in the 1970s does not work today. This is a much more diverse country and the Democratic Party is offering very different messaging than it did when Biden entered the Senate.”

The distance between today and Mr. Biden’s entrance on Capitol Hill is separated by as much time as the distance between the debates on Vietnam he confronted as a freshman lawmaker and the era when Lenin and Ataturk bestrode the Earth, the hockey team now known as the Maple Leafs was called the Toronto St. Patricks, and automobiles in Prince Edward Island still drove on the left side of the road.

On the surface – in fact, also deep inside his persona – Mr. Biden is as unchanged as some of the issues that still define American politics, from abortion and guns to the role of government in the economic life of the country and the agony over how to diminish racial tensions. To friends and his Delaware neighbours, he’s still just Joe.

Although he can no longer wander the aisles of Janssen’s grocery store or sit at the counter near the pile of onions frying on the grill of the Charcoal Pit, Mr. Biden still retreats to his Greenville, Del., home to centre himself and, in fact, returned last month for the mass conducted for the St. Patrick’s Day Society, a Wilmington, Del., organization to provide aid for the homeless.

“Anyone is absolutely going to change when they become president,” said Bobby Byrd, a former member of the Delaware House of Representatives and lobbyist who has been at the centre of Delaware politics for decades. “But basically Joe is still the same guy.”

Mr. Biden is the third old man to win the White House in the past 40 years, a marked change from some of the presidents in his lifetime such as the 43-year-old John F. Kennedy, the 46-year-old Bill Clinton and the 47-year-old Barack Obama. In many ways the 69-year-old Mr. Reagan and the 70-year-old Donald Trump – the earlier holders of the oldest-president crown – both underwent more fundamental changes in their politics than Mr. Biden has as the new record holder at 78.

“He’s always been about the middle class and boosting the poor into the middle class and he still is,” Delaware Governor John Carney, who has been part of the Biden circle for decades, said in an interview. “But now he is doing it in a much different time and his lens has expanded.”

One of the indicators of the changes that have reshaped American politics is that the percentage of Americans who say they do not trust Congress has more than tripled in the time Mr. Biden has been in politics, according to Gallup Organization surveys. And Congress itself has changed dramatically.

There no longer are substantial numbers of moderates in a Republican Party that today is so conservative that the grandchild of Barry Goldwater, once considered occupying the farthest-right extremes of the GOP, said she did not think the 1964 presidential nominee would fit comfortably in his party. Nor are there conservatives in a Democratic Party that within living memory was so dependent on Southern legislative barons that it tolerated outright racists as powerful committee chairmen.

The centre of gravity of American political life has shifted – if there remains a centre at all seven decades after the historian Arthur M. Schlesinger Jr. published his influential The Vital Center.

That is why Mr. Biden, who spent a lifetime in the Senate coddling and protecting the Fortune 500 business giants who took advantage of Delaware’s liberal incorporation laws, could propose this month to raise the corporate tax to 28 per cent from 21 per cent and take aim at long-time provisions that permitted U.S. corporations to skirt taxes by shifting their profits overseas.

“He was pretty much a centrist and he’s no centrist now,” said Robert Livingston, a former representative and House appropriations committee chairman from Louisiana who is now a Washington lobbyist. “He’s not at all what he used to be. The spending is way out of control. He’s set to spend trillions and trillions of dollars. He was always kind of left of centre but nothing like this.”

Transitions like that have unsettled Republicans, who once viewed him as a potential ally in the centre of the Democratic caucus.

“He was never a hard-charging ideological member in the Senate. But he is much more so as President because of what has happened in the Democratic Party,” said former GOP senator Robert Kasten of Wisconsin, who as chairman of the foreign operations appropriations subcommittee often worked with Mr. Biden on foreign-policy funding questions.

“What is different is that he has a much more aggressive, younger, more liberal and maybe even more intelligent group of top staffers around him. They are exceptionally capable and are pressing the new liberal agenda of the Democratic Party.”

They are, to be sure, true to the progressive thinking of the new Democratic Party. But the question about whether they are true to the instincts of a President whose experience and impulses were formed in a half-century of very different Washington politics remains unanswered.

Opinion
A seminal moment for racial justice in America – but don’t count on it lasting
Subscriber content
April 21, 2021 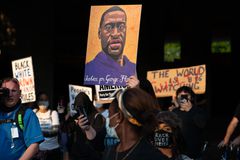 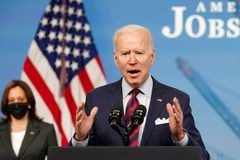