Whatever you do, don’t go back and watch Kathleen Wynne’s leadership speech at the 2013 Ontario Liberal Convention. Really, don’t. It’s like that part in the movie where they show a happy puppy, only you know it’s going to get mowed down in the third act.

There are the dancing supporters in their “Wynne Now” t-shirts, the cheery pop song and finally the candidate, beaming, preaching her message of social justice wrapped in fiscal responsibility, expressing her faith that the province is ready to elect a gay woman as its leader. The province was ready, and she led her party to a majority victory in 2014. It’s just that the province didn’t much like her after that.

The Premier herself got in on the action, at the final leadership debate of this nutty provincial election: “I’m really genuinely sorry that more people don’t like me,” she said. “But I’m not sorry about all of the things we’re doing in Ontario to make life better.” For the past year, her approval ratings have lingered in the low teens range. If her ratings were human, they’d be moaning about cleaning their bedrooms and being misunderstood.

In my colleague Janet McFarland’s excellent piece about why voters have soured on Ms. Wynne’s personal qualities, she cites six reasons, including the fact that the Liberals have been in power for 15 years and there is legitimate anger over the spike (since decreased) in consumers’ electricity bills. Two of the reasons she gives get less attention: sexism, and Ms. Wynne’s finger-wagging ways.

The combined issue of sexism and homophobia cannot be overlooked: The grotesque, gender-specific abuse aimed at Ms. Wynne has been shockingly public. “Dyke” and “bitch” are the two of the insults I can print; far worse has been said. As Steve Paikin, host of TVO’s The Agenda, wrote in a blog post last year, “If Wynne were a heterosexual man rather than a gay woman, would her approval rating be so low?”

Let me put it another way: Would her wonkishness and grasp of complex initiatives be viewed so negatively if she weren’t a woman? A robotic comprehension of policy options hardly hurt Stephen Harper for the nine years he was prime minister; nobody was clamouring to go tie shopping with him. The idea that competence is a drawback is shocking, although we may no longer have the luxury of worrying about that in Ontario.

Female leadership candidates are judged more harshly than their male counterparts on a number of fronts, including tone of voice, appearance and likeability. When asked in a poll which Ontario leadership candidate they wanted to babysit their kids – today’s equivalent of “Who would you like to have a beer with?” – only 18 per cent of respondents picked Ms. Wynne. I have to say, if you’re choosing politicians based on the likelihood they’ll buy you a beer or put your kids to bed, you may need new friends rather than a new government.

I find Ms. Wynne’s government disappointing on various fronts, starting with the fact that it has been deeply manipulative and unhelpful around Toronto’s road tolls and subway system. As Jennifer Pagliaro discovered in a recent Toronto Star investigation, the Liberals pressured the city to build a useless subway extension in the suburbs, while pretending they hadn’t. There are legitimate reasons not to vote Liberal in this election, ones that have nothing to do with the Premier’s unlikeability or the fact that you have a sneaking suspicion that she’s smarter than you, and knows it.

Ms. Wynne also knows that the irrational loathing made her a dead weight dragging her party to the bottom, and in a bid to cut candidates free (and preserve official party status for the Liberals), she has conceded that she won’t be premier after this election. Cynical or selfless? It depends how you feel about schoolmarms.

It’s doubly sad if Ms. Wynne’s gender is partly responsible for her downfall, considering her devotion to making this province a better place for women. From devising a plan to combat violence against women to passing legislation to make salaries more equal, the Liberals have actually walked the walk on women’s issues over the past four years.

I’m not sure many other premiers would have consulted with two eighth-graders who were campaigning for consent to be part of the sex-ed curriculum, as Ms. Wynne did in 2015 when she met with – and listened to – Toronto activists Tia Valente and Tessa Hill. The Premier updated the curriculum to be humane and progressive, over the complaints of parents who seemed to prefer that their children learn about sexuality from the internet and old copies of Hustler. That was not an easy fight, but she fought it.

Likewise, I’m not sure how many other premiers would have made gender-based violence a priority, as this government did in 2015 with their “It’s Never OK” initiative to fight sexual harassment and misconduct, including on campuses and in the workplace. This year, the government announced it would ensure that survivors of domestic violence get up to 17 weeks of workplace leave.

And the Wynne’s government’s pay-transparency legislation, passed earlier this year, may not go as far as some campaigners wanted, but it is useful progress in leveling the playing field: The legislation requires companies that publicly post a job opening to name a salary range, for example, and forbids them from asking applicants about previous pay rates. In a couple years’ time, companies that employ more than 100 people will have to file reports that will reveal gender disparities in pay. These are small steps that together equal large strides.

There are legitimate concerns among people who work in women’s health and advocacy that this progress could be erased. The province is not guaranteed to move inexorably forward; backwards is a direction too. I wonder if Ms. Wynne will look more appealing in the rear-view mirror. 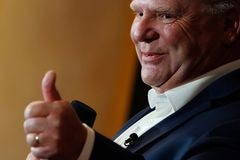