Marissa Stapley is a novelist and former sports reporter.

I remember the moment I learned about the domestic assault allegations against Toronto Blue Jays’ closer Roberto Osuna: I was sitting in a restaurant with my family, one evening in early May.

My 11-year-old son pointed to a banner running across the bottom of the television screen behind the bar, where Mr. Osuna’s face had appeared. A difficult conversation ensued – one made more difficult by the fact that we were decked out in Jays gear, on our way to the ballpark, where we would watch our deflated Jays succumb to Seattle Mariners’ pitcher James Paxton’s no-hitter.

“Osuna might be innocent, but he might not be,” I said. “Until we know for sure, he shouldn’t be pitching. And if he does pitch before these allegations are resolved, we won’t be watching.”

I hoped I wouldn’t be required to stand by those words. But as the weeks passed, I found myself reflecting on domestic violence in professional sport, and what the policies and consequences, or lack of them, meant to me as a female fan – especially if I ended up having to gauge how comfortable I felt returning to the Rogers Centre, most likely with my children, to cheer on a player with a cloud of violent allegations hanging over his head.

The domestic-violence statistics in Canada are dire: A woman is killed by her partner approximately every six days. It’s difficult to get a clear handle on domestic-violence statistics in professional sport, but the sheer volume of stories I read – from past allegations that Aroldis Chapman, a Cincinnati Reds closer at the time, choked his girlfriend and fired a gun at her in a domestic incident, to the distressing video I watched of MLB prospect Danry Vasquez slapping and then dragging his girlfriend down a staircase – told their own story. I also noticed a pattern: A lot of these cases didn’t go to trial, not even when there was video evidence. And rarely were the players in question, no matter how violent the allegations levied against them, excised from professional sports altogether. It seems there’s always a team willing to hold its nose and take on a player with a history of partner abuse – which makes it look an awful lot to me like in the big leagues, talent is more important than integrity.

Like other Jays fans, I didn’t want the allegations against Mr. Osuna to be true. I wanted to go back to the days when games would often end with the enigmatic pitcher and the puppy-faced Russell Martin engaging in an endearing game of “knock-knock, who’s there?” before sharing a bromantic hug.

On Monday, Mr. Osuna’s case was put over until August 1, four days before his 75 game suspension runs out. Yet even before that happened, Jays management communicated that, as of Aug. 5, their star closer would be back on the team, welcomed into the fold by a paternal John Gibbons, who said he “love[d] the kid” and was “not going to punish him,” and a general manager, Ross Atkins, who said “we’re running a baseball team and our goal is to win championships. Roberto could potentially be very much a part of that.”

My team was putting me in an impossible position as a woman, as a mother, as a human being. I was being asked to trust that they knew best. I was being asked to return to the stadium and put my hands together for a young man whose alleged actions stand in direct opposition to one of my most closely held convictions: that alleged victims are to be believed. I was being asked to listen to the elated cheers provoked by the sight of Mr. Osuna kissing that crucifix dangling around his neck, and I was being asked not to wonder how people in the crowd, or at home, who had been victims of the kind of crime the pitcher was alleged to have committed, may feel about that. Finally, I was being asked to allow my children to do the same: to put this young man back on a pedestal it is no longer clear he deserves to be on.

So, I did what many people do in the age in which we live. I opened my Twitter account and wrote, “Dear @BlueJays, If you welcome Osuna back with open arms, I won’t attend another game and will demand a refund for all tickets purchased this year. I will not bring my children into a stadium where he is pitching. Thanks in advance, a female fan.”

Later that day, I noticed dozens of Twitter notifications. I was called a “crazy feminist.” I was told no one cared what I thought. I was accused of ignoring due process, of presuming guilt and – a far worse crime, it seemed, than the alleged domestic violence being discussed – I was called a “bandwagoner,” a “fairweather fan,” and someone who obviously knew “zero.”

Was I being treated this way because I was a female fan? Because true fans don’t concern themselves with their favourite players’ personal lives? Or because the world of sports fandom simply doesn’t have room for someone who shares my convictions: that a player accused of violence should sit out until the case has been resolved, and/or until it has been made clear to fans that, if the charges have merit – as the MLB clearly feels the ones against Mr. Osuna do because it handed him one of the most substantial domestic-violence policy violation suspensions in league history – at least some attempt has been made at rehabilitation and restoration, and not just as it relates to his pitching arm?

The reality is the allegations against Mr. Osuna may never be proven and Jays fans may find ourselves stuck in the grey area between not guilty and innocent, as many other sports fans have been before us. Ultimately, the silence of the alleged victim may be bought with an out-of-court settlement. It’s easy to do that when you’re earning millions of dollars a year.

I’m not comfortable if the silence is also my own. We live in a world where our most vulnerable are being abandoned by governments and marginalized by fellow citizens. In the grand scheme, professional sports should be the least of my worries – yet I can’t help but feel that if the big leagues are in the spotlight, they, too, should be the ones to stand up and fight for change on behalf of those who can’t. There’s a reason NFL players taking a knee got so much attention. These guys get respect, even if they don’t always deserve it. What if one league, or even just one team, took a zero-tolerance policy when it comes to domestic abuse?

As I was writing this, the unsettling story of the violent assault of Buffalo Bills running back LeSean McCoy’s ex-girlfriend, the victim of an alleged home invasion, surfaced on social media. Buffalo fans might soon find themselves in the same position as Toronto fans – waiting for details, weighing the moral risks of supporting a player who may have crossed a line, and wondering who to believe.

I don’t have clear answers, but I know this: When I watch my son play baseball, I see him mimic the movements and the mannerisms of his favourite players. He looks up to these people and because of that, I have no choice but to hold them to the highest possible standard. I don’t think it’s unfair to expect professional athletes to be as above average in their personal lives as they are in their professional ones, to strive to be good citizens just like the rest of us are supposed to do. I’m not asking for a crucifix-kissing saint. I just don’t want my kids’ favourite players to be allowed to hurt vulnerable people, ever – and if they do, I don’t want it to be so beyond the pale for me to suggest that their careers be put on an indefinite pause.

That’s why I find the Jays management’s current position on Mr. Osuna so unsatisfying. Perhaps I wouldn’t feel this way if the team had communicated that Mr. Osuna’s lost wages were going to be put into a domestic-abuse-prevention fund. If fans had been assured that the team was more committed than ever to educating players about domestic violence, to supporting their players in every possible way – not just on the field, but with mental-health awareness and action, the kind of action that may stop this sort of thing from happening with such alarming frequency.

If nothing changes, I’ll miss out on watching the rest of the Jays season and, as the Twitter cacophony assured me the other day, no one will care if I do. But I’m still hoping the team I love will choose to do better. An independent investigation and a punishment doled out that does not – at least as far as fans know – contain any attempt at rehabilitation (beyond a coach’s heartfelt hope that a player can “turn his life around”) is as empty as the beer cans fans sometimes throw onto the field in a rage. Toxic masculinity in sports is a problem because it alienates people – not just female fans such as me, but those among us who have been physically abused and feel powerless and afraid because of it. I want my team to send a clearer message to all fans that domestic violence is not tolerated in professional sport. Until we know for sure that Mr. Osuna is innocent we should not be expected to jump to our feet and cheer his name.

I say this as a true Blue Jays fan, a female Blue Jays fan, a mother, a feminist and a realist: It’s not going to feel as good as we think it will to see Mr. Osuna take the field before the air has cleared. Any victories he may lead us to will feel hollow if the allegations against him are proven true. It’s not going to hurt anyone, at least not physically, to wait a little longer – just until we can be certain of him again. It might even make the world – of sports, at least – start to feel like a better, safer place. 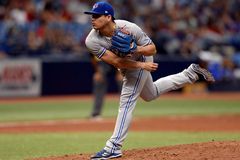 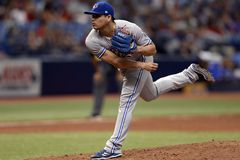 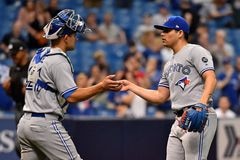