If you do a Google image search for the word “stalking,” what appears is a series of women gazing fearfully over their shoulders at a shadowy figure following them. The women are shown in the street, in tunnels, on buses or, as we used to say, “in real life.” She is almost never shown going about her daily business on her phone, using her GPS or posting on social media – even though that is increasingly where harassment occurs.

Technology is the frightening new frontier for women experiencing abuse and stalking (which falls under the legal designation of “criminal harassment” in Canada). Domestic violence has always centred on the abuser’s need for control, and the wired world offers a whole new set of opportunities to exert that dominance, whether through internet-connected appliances in the home or monitoring devices installed on phones. As always, technology is moving faster than the law possibly can, putting women’s lives in danger.

A new report from Citizen Lab at the University of Toronto, The Predator in Your Pocket, outlines the dangerous uses of monitoring apps, some of which try to present themselves as innocuous. The developer may insist that the app is merely intended for locating friends or wandering children, but as the study points out, they will also be blatantly marketed toward people who want to monitor their partner’s whereabouts. Monitoring location is only part of it: The so-called “stalkerware” apps can allow the stalker to read messages and social-media feeds, search histories and, in some cases, control the camera or microphone in a device. The most chilling part: The person who is being watched will have no idea what’s going on.

“Digital surveillance technologies are increasingly being used by stalkers and abusive partners to exert control over their current or former intimate partners,” the Citizen Lab report reads. It provides sobering statistics for why this is a serious problem, and possibly a deadly one, citing a 2012 Canadian survey that showed more than 70 per cent of abusers “had hacked the email and social media accounts of the women and girls that they targeted, and that a further 60 per cent had hacked into computers to monitor online activities and extract information.” Almost a third had installed computer-monitoring software or hardware on their target’s computer.

Want to love books again? Read something bad for you

When it comes to racism against Indigenous people, we don’t want to look in the mirror

Can you enjoy summer without a burger? It’s worth a try

While surveillance already constitutes abuse on its own, it often accompanies physical violence. According to the U.S. National Coalition Against Domestic Violence, three-quarters of women who were murdered by their partners had been stalked first.

Citizen Lab’s report looks at eight apps for Android phones, which have names such as FlexiSpy and Mobistealth. Some of these monitoring apps can be installed without the owner’s knowledge by a partner who has access to their devices. The report is long, careful and academic but still enraging. For one thing, the developers of these apps know full well how they may be used, and market them to jealous partners (who, yes, may be women as well. Men, however, are statistically more likely to be perpetrators of stalking and domestic violence).

Another academic study from 2018, The Use of Spyware in Intimate Partner Violence, echoes these findings: Creating spyware is a morally dubious but lucrative business. That report, which examined more than 200 apps, noted that some might be marketed as purely innocent ways to keep track of loved ones, but their customer reviews gave away the game. “Love it!!! I've been suspecting my gf cheating and this gave me answers really quick.” Or this review, posted on an app that markets itself as a monitoring service for long-haul truckers: “Love it! I can now keep an eye on my possibly cheating wife!”

Canada has laws to protect personal privacy and users’ electronic data, but these apps operate in a murky and underpoliced zone. The report suggest ways that legal loopholes could be tightened to increase users’ awareness that they may be under surveillance, and also to give them better access to their data and ways to delete it.

Crucially, though, it notes that advances in technology did not create misogyny. They only provided a new, faster, stealthier pathway for it to travel. Only by addressing the root causes of gendered violence will women’s lives be safer. And one way to do that is to have more women involved at the beginning, to ensure “all digital products and services are developed so that gender is taken into account when they are being envisioned or developed.”

There is something insidious about tech-enabled harassment, which makes women feel more gaslit than ever before. It’s largely invisible to the outside eye. Last year, I interviewed a woman whose ex-partner was trying to torment her by remotely controlling the temperature and sound system in their house (as well as monitoring her electronically through her phone and computer). “I felt like I was going crazy,” she said. People who work in the domestic-violence field also told me they were noticing an increase in tech-based harassment, and that women often felt powerless to stop it.

The law, hopefully, will catch up before it’s too late. Last month, the CBC carried a story about a woman in Quebec who is seeking compensation from the province’s victim-support fund, after her ex-partner was charged with using several cameras to surreptitiously film her and her children.

Last year, a man in Britain was convicted of stalking after he installed surveillance software on an iPad to eavesdrop on his ex-wife in her home (he also hacked into her dating apps and sent obscene message to potential partners). A more grim story came out of the United States, where a man in Florida was convicted of murdering his wife and her children, mere days after installing tracker software on her phone.

We can’t address misogyny overnight, but we can make it easier for women to be free of it in their daily lives. We made the technology, and we can fix it, too.

How ‘tech abuse’ is linked to stalking and domestic violence
Subscriber content
October 16, 2018 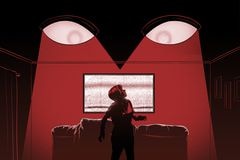