There is one big election-platform reveal left: Where is Andrew Scheer going to find $15-billion?

The Conservative Leader has run a campaign focused on tax cuts, and on running a government that “lives within its means.” Soon he has to reveal how it will add up.

Before the election campaign, Mr. Scheer ditched his promise to balance the federal budget in two years, saying it will take five.

But he has since made promises that would make the deficit bigger – unless he identifies billions in spending cuts or new taxes.

As it stands now, Mr. Scheer’s platform would not lead to a balanced budget in five years, in 2024-25 – not even close. University of British Columbia economist Kevin Milligan has been compiling the Parliamentary Budget Officer’s cost estimates of Conservative proposals, and so far, it adds up to a $15.6-billion deficit in 2024-25. That is, until the Conservatives tell the country how they would fill that hole.

Mr. Scheer hasn’t been in a rush to explain that. He is waiting until after all of the leaders’ debates, when advance voting will already be under way, and there will be just over a week left in the campaign.

There is, by the way, another party that has yet to release the costing for its entire platform, the NDP. But the exercise is, frankly, easier for them. They don’t really have much chance of actually taking office, and NDP Leader Jagmeet Singh hasn’t promised he will project a balanced budget.

Mr. Scheer, on the other hand, has promised a balanced budget in five years, and his aides still insist he will stick to it.

The Conservative Leader has run his campaign primarily on tax cuts, so it is hard to imagine he would suddenly announce a big tax hike now. Justin Trudeau’s Liberals have been warning throughout the campaign that Mr. Scheer’s Conservatives are planning spending cuts that will hurt – so presumably, Mr. Scheer wants to find cuts that aren’t controversial.

Up to now, Mr. Scheer has been telling reporters he will pay for his promises by cutting $1.5-billion from “corporate welfare” and $1.5-billion from foreign aid. But that will only pay for a fraction. There is still that $15.6-billion shortfall in the year the budget is supposed to balance.

The Conservative Leader has talked about making ends meet by limiting the growth of government spending – but he has made other promises that get in the way.

Over all, government spending will rise to more than $400-billion in 2023-24, according to the 2019 budget, so you might think it would be easy to lop $15-billion off. However, most of it goes to transfers to provinces or individuals that Mr. Scheer won’t touch.

He has said he won’t touch the big transfers to provinces for health, social services, equalization and gas taxes, which are some of the largest and fastest-growing parts of government spending. Those will total $88-billion in 2023-24.

You also have to guess that Mr. Scheer will not take the politically suicidal step of proposing a cut to elderly benefits. Payouts of employment-insurance benefits are already declining. And he has promised he won’t touch the Canada Child Benefit. Those three transfers will amount to $121.5-billion in 2023-24.

There’s not much you can do quickly to dramatically reduce the public-debt charges projected at $33.2-billion for 2023-24. Even a serious, immediate budget-cutting won’t reduce that by more than, say, $1-billion.

So what’s left? The $159-billion in program expenses – operating federal departments and the money they dish out. The problem is that curbing the growth of their spending, even freezing it, would only save a few billion.

Lopping $15-billion from program expenses takes far more than curbing spending growth. It means cutting the equivalent of about two-thirds of the defence budget, or eliminating two or three mid-size government departments.

Perhaps, the Conservatives plan to make ends meet by pushing back billions in infrastructure spending for a few years – lowering expenses temporarily by delaying projects. But Mr. Scheer has been promising to spend on infrastructure, including Toronto transit projects and a new bridge to Quebec City.

One way or another Mr. Scheer is the candidate who campaigned on fiscal probity, so the last big policy announcement of this campaign will be his explanation of how he would get to a balanced budget. 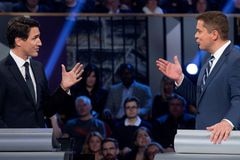 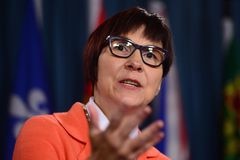