There was a moment early in Monday evening’s Ontario leaders’ debate that you could see coming from a mile away.

An exchange about where Doug Ford would find billions of dollars in savings had devolved into an increasingly hostile back-and-forth between the Progressive Conservative Leader and the Liberals’ Kathleen Wynne – Mr. Ford defaulting to his favourite attack line about the Liberals being in cahoots with richly paid energy executives, Ms. Wynne firing back about Mr. Ford being cozy with developers who would pave over the Greenbelt.

Off to the side, NDP Leader Andrea Horwath could be seen laughing and shaking her head. “While these two argue,” she said when she got her opening, “our hydro bills are going through the roof.”

Read more: Trudeau to stay out of June Ontario election, but Scheer and Singh to campaign for their parties

Ms. Horwath’s aim, in the election that officially begins on Wednesday, is to present herself as a ray of sunshine opposite two darker options. In that moment and others, she executed it well enough to suggest that – as per a pair of polls released earlier in the day showing the NDP pulling ahead of or even with the Liberals for second place behind the Tories – she may be able to turn this campaign on its head.

It wasn’t just displays of fatigue with the other two’s bickering – which happened several more times, to diminishing effect as her laughing and head-shaking got more exaggerated – that spoke to that potential. She also appeared at various points to check off the most boxes on a list of things Ontarians might conceivably want in their next premier.

For voters whose only criterion is change – a government as different as possible in character from the current one – Mr. Ford is the obvious choice. In the debate, as since entering provincial politics earlier this year, he presented himself as someone who, through sheer force of personality, would able to able to impose common-sense solutions to all the things – wasteful spending, energy prices, health-care waits – that madden Ontarians about their current government.

But predictably for anyone who has been watching him, he did not provide reassurance to those worried about his readiness for office. Early on, he got into trouble attempting to go near the details of governance, as Ms. Wynne served as his fact-checker. After a while he defaulted mostly to slogans – many variations of being there for “the little guy” – that allowed him to more easily be on the attack. Again and again, he had no coherent rebuttal to accusations that his quest for savings would lead to deep cuts.

Ms. Wynne left no doubt about her competence. On virtually every subject, from housing affordability to police conduct to public transit, she was ready with a calm, facts-heavy defence of her record. But when polls show roughly four-fifths of the electorate wanting change, she no doubt sounded to many like a disconnected defender of the status quo.

Ms. Horwath didn’t offer as much change as Mr. Ford, and wasn’t quite as good as Ms. Wynne at going into the weeds. But on many topics − debating Ms. Wynne on where government policies fall short, citing specific investments her party would make − she was the only one who offered some change and knew what she was talking about.

There was also something she did better than either of the others. Mr. Ford was so vague, so much of the time, that for all his talk of “the little guy” it might have been hard for him to really connect with day-to-day concerns. Ms. Wynne was so committed to debating the facts that she sometimes forgot to relate them. But Ms. Horwath did empathy really well.

At one point, when they were asked about supervised drug-use sites, Mr. Ford dismissed them and Ms. Wynne recited the evidence in favour. Ms. Horwath, by contrast, started by acknowledging community concerns around the sites, then told a story about encountering a heroin user shooting up outside her office and fearing for both their safety, and only then got to taking the same side as Ms. Wynne.

None of these were moments that will or should propel her toward the Premier’s Office – not in a debate focused on Toronto-area issues before the writ even begins.

But there is an obvious opening for her this campaign, between Mr. Ford and Ms. Wynne. The version of Andrea Horwath who showed up for debates in her first two elections as leader would not have been able to take advantage. The one viewers saw on Monday might. 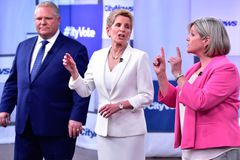