Kenneth Whyte is publisher of Sutherland House Books. His books include Hoover: An Extraordinary Life in Extraordinary Times, and he writes a weekly newsletter, SHuSH.

Late last year, the Canadian government perceived a threat to our democracy in the emerging posttruth world of fake news and filter bubbles. It announced a $600-million package to support our newspaper industry to safeguard the supply of reliable, objective news and information in the public sphere.

It remains to be seen whether these funds will save some of the troubled companies now cashing government cheques, let alone our democracy, but there can be no arguing with the basic premise that the circulation of reliable, fact-based news and information is important to civic culture.

Being informed of the world outside our doors helps us (in theory) make better decisions than we might if left in ignorance. Given that an uninformed or misinformed public means an uninformed or misinformed electorate, governments are legitimately concerned with the quality of information in circulation. And that’s what makes the Canada Council for the Arts’s book policies, which run counter to the government’s measures to promote an objective, fact-based literature, inexplicable and dangerous to civic culture.

Books, too, play a role in informing us of the world around us. They are how most of us (or, at least, many of us) learn our history. They explain the structure and workings of our government, and help us explore critical issues and study social conditions. They introduce us to important lives, and explain what is happening in science, technology, business, medicine, and so on.

You can learn a lot about Canada and the world from such writers, and it was precisely to cultivate so robust a writing community that our government began supporting the literary arts a half century ago. The authors on that list have all produced meaty, well-researched, thoughtful books on important matters of history, biography and public affairs. Some are still alive, and some are still publishing, although only one is under 50. They are a dying breed.

There remain some young, talented non-fiction writers in the field: Naomi Klein (This Changes Everything), Tanya Talaga (Seven Fallen Feathers); Robyn Maynard (Policing Black Lives), Chris Turner (The Patch), David Sax (The Revenge of Analog); Aaron Wherry and John Ivison (each with a Justin Trudeau book); and Robyn Doolittle, who picked apart Rob Ford. But the talent pool is shallow. The books are thinner. The sales are lower: This group usually tops out at about 15,000 copies, while it was not uncommon for some (not all) members of the above group to generate 50,000 or even 100,000 in sales.

There are several reasons for the decline of fact-based Canadian non-fiction. The academy actively discourages publication for general audiences. There are fewer magazines and newspapers to develop journalists and support them in time-consuming, research-intensive storytelling. We have lost several large independent Canadian publishing houses dedicated to quality non-fiction, including Key Porter, Stoddart, and Macfarlane, Walter & Ross.

Into this mix, in a destructive way, comes the Canada Council, the most significant funder of literature in the country. In recent years, of its own bureaucratic accord, it has adopted a new approach to non-fiction for the purposes of grants and awards. A publishing colleague who called to ask about the eligibility of his books was told that the Canada Council is in the business of supporting art and that so far as the council is concerned, the personal voice of the writer is what makes non-fiction art. Personal memoir is art, as is personal history, personal essay, personal anything. Objective, fact-based journalism is not art. Nor are essays, histories, biographies, science writing, etc.

The narrowing of the council’s non-fiction focus was high on the agenda at a meeting of the Association of Canadian Publishers in Montreal last year. Its members, drawn from the ranks of Canada’s independent houses, who produce most of Canada’s non-fiction, were alarmed at dwindling levels of support for their fact-based wares. Their lobbying of the council prompted the quiet release, two weeks ago, of a rare statement of policy: “The Canada Council for the Arts supports creative writing in all genres. Literary non-fiction is one of the genres supported by the Council, with no restrictions on subject matter. Works of literary non-fiction are evaluated on the basis of artistic merit.”

This was meant to reassure publishers, but it left the several I contacted scratching their heads. How precisely does the council define literary non-fiction? Does it include fact-based, third-person biography, history and journalism, or not? How does the council define artistic merit? Does it include substance as well as style? Do fidelity to fact and the objective presentation of facts and arguments contribute to or detract from artistic merit?

Youssef El Jai, the Canada Council director whose signature was attached to the statement, declined an opportunity to discuss it on the telephone or in person this week. His reluctance is understandable: It is no easy task to explain why an author’s decision to write in the third person or to respect verifiable fact disqualifies him or her as an artist.

To his credit, Mr. El Jai, in an e-mail exchange, acknowledged that the council’s focus has shifted (or, rather, that his statement represents “the culmination of a gradual alignment with the Canada Council’s mandate that has been taking place over the past 10 years.) He chose not to define literary non-fiction or artistic merit, but reiterated that artistic merit is the key to eligibility. He maintains that it’s up to Canada Council juries to define artistic merit, a position that is difficult to square with the fact that the council, not its juries, is putting out statements on eligibility and acknowledging that it has been adjusting its mandate.

The Canada Council matters because its policies, over the long term, have created a publishing industry in which most Canadian publishers are under water without its support. Most houses can’t afford to publish books that are not eligible for funding. If the council is frowning on fact-based non-fiction, or appearing to frown on fact-based non-fiction, the publishers will gravitate toward fiction, poetry and the sort of first-person non-fiction that appears to be in favour at the council. Not surprisingly, we now have a glut of memoir and personal non-fiction in Canada (much of it excellent), and a dearth of fact-based, objective non-fiction.

Eight out of the last 10 nominees for the Governor General’s Award for non-fiction (which is administered by the Canada Council) have been personal literature. All five of the finalists for last spring’s 2019 RBC Taylor Prize, the most important non-fiction prize in Canada, and one that will cease to exist after next year’s prize is awarded, were personal stories. Three of the nominees for this year’s Hilary Weston Writers’ Trust Prize for Nonfiction were memoirs, the fourth is personal essay, and the fifth is a series of lectures on Indigenous issues by reporter Tanya Talaga (which might or might not qualify as personal depending on how much emphasis you put on the author’s Indigenous identity).

All of the nominees are deserving books, and personal writing, too, enhances civic culture. But there are obvious limits to the subjective perspective. As a guide to the world, personal literature is best consumed along with works based on verifiable fact and some measure of objectivity.

In recent months, Linden MacIntyre’s The Wake, an account of a tsunami that hit Newfoundland’s Burin Peninsula in 1929, has been the only fact-based non-fiction book (apart from self-help, cookbooks, and hockey books) consistently among the 500 bestsellers in Canada (according to Amazon). The sales results in Canada’s bricks-and-mortar bookstores are not available for public consumption, but they are not significantly different. (This appears to be a particularly Canadian problem. A glance at U.S. non-fiction lists and the short lists for the Pulitzer Prize and National Book Award show a healthy mix of both personal and objective work.)

It is lunacy to have some branches of government panicking over the lack of reliable, fact-based information in the public sphere while another branch of government undermines fact-based books and exclusively funds works in which the subjective experience of the writer is primary. If Ottawa is genuinely concerned about the quality of public discourse in Canada and the information available to the electorate, it needs to direct the Canada Council to resume its former practice of supporting fact-based non-fiction to the same levels as fiction, poetry, and personal literature, or have some other branch of government step up.

Meanwhile, the Canada Council’s mandate mambo is a stark reminder to a news community just beginning its journey of government funding that the bureaucratic mind finds it difficult to distinguish between supporting and directing an endeavour. 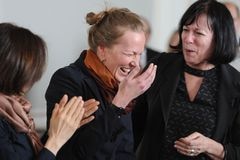