Elinor Sloan, professor of international relations in the department of political science at Carleton University, is a fellow at the Canadian Global Affairs Institute.

The lead-up to this week’s NATO Summit in Brussels has been marked by growing uncertainty as to the future of the alliance. U.S. President Donald Trump has denounced countries such as Canada and Germany, among others, that have failed to put in place a plan to spend 2 per cent of their gross domestic product on defence, as first agreed by the North Atlantic Treaty Organization members in 2006 and again in 2014. In the United States, which spends about 3.6 per cent of its GDP on defence, frustration has been growing for years. Under Mr. Trump, it is boiling over.

The United States is unlikely to leave Europe any time soon. In January, it released a national-defence strategy that relegated terrorism to second spot in terms of threats to America. The new number one threat? Great-power competition from Russia and China. Since then, the U.S. has increased its military commitment to Europe. It is resurrecting its navy fleet in the North Atlantic, sending more tanks and heavy vehicles to Poland and the Baltics, and building new infrastructure in Europe to support advanced fighters and bombers. Beneath the virulent rhetoric, the military evidence is that the United States remains committed to European security.

But the escalating debate and condemnation has also laid bare that allies are not equally sharing the monetary burden of fielding the militaries that are ultimately needed for deterrence and defence. Currently, only a handful of allies meet the 2-per-cent target, while others have plans to do so in the medium term. In Strong, Secure and Engaged, the defence policy released in 2017, Canada committed to increasing its defence spending to 1.4 per cent by fiscal year 2024-25 − nowhere near the 2-per-cent guideline.

A big reason countries don’t adhere to that number is because it is a flawed metric. It doesn’t capture the military capability a country can deploy in support of NATO operations, measure absolute military spending or account for the percentage of a defence budget spent on major equipment as opposed to, say, pensions and housing. Nor does it factor in qualitative things such as a willingness to take on leadership roles, contribute to dangerous missions, and accept casualties and the loss of life. The 2-per-cent figure, in short, does not come close to telling us what allies actually bring to NATO’s military table.

Nonetheless, there are good reasons for Canada to set a path to meeting the 2-per-cent guideline. First, European security and NATO’s continued existence is in Canada’s interest. The strength and longevity of NATO lies in being both a military and a political alliance. The guideline is quintessentially political in nature. It provides a snapshot of what a society is willing to bear in support of its allies, and the political capital a leadership is willing to expend to this end. It is the lens through which all post-9/11 U.S. administrations have gauged allied support for NATO, and therefore the degree to which the United States should stay committed.

Second, the world is changing in ways that will require Canada to do more for its own defence. U.S. support and protection, on which we have relied for decades, can no longer be taken for granted. U.S. power is also in relative decline as new powers emerge, meaning Canada will have to increase its role in places such as the Asia Pacific.

Most critically, Canada’s geographic isolation is markedly diminishing. The Arctic is melting, shipping traffic is up, bombers and fighters test our airspace and new weapons are being developed that can strike North America from afar. Current defence-spending plans will not support the fighters, ships, submarines and other capabilities that are necessary for Canada to defend itself and “set our own clear and sovereign course,” as Foreign Affairs Minister Chrystia Freeland put it a year ago.

Mr. Trump’s diatribes have had many negative consequences. A positive would be if they spark a wide-eyed realization in Canada of our new security and defence situation, and prompt the government to act accordingly. 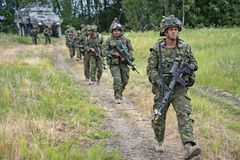 Opinion
When allies were friends: Trump must learn from the Berlin Airlift victory
July 2, 2018 Opinion
Canada must recognize that the game is changing
July 1, 2018