I ride the bus to work. A car would undoubtedly be faster, but it’s more expensive (and often less entertaining). However, I recently gave Uber a try. I was running late for a meeting and the ride-hailing service seemed like a good way to make up time. My driver for the trip was John (not his real name), a stocky, full-bearded Irishman. As I strapped myself in, John fired up Uber’s mobile app – a computer program used by company drivers. The app uses cellphone signals to establish where a car is, where it needs to go and how best to get there.

During my trip, John staunchly followed the app’s guidance, making easy work of Boston’s confusing streets. Until that is, John’s phone lost reception. That’s when the real adventure began. It turns out that while John knew where I was going, he did not – sans properly functioning technology – know how to get me there. The result? An exercise in futility. Turning right often resulted in a dead end. Turning left, a trip to the international airport (where we ended up twice). I eventually opted to continue my trek on foot.

The experience made me wonder how a driverless cab would fare. When confronted by a similar glitch, would it imitate John’s strategy of admirable yet futile persistence? Or would it – at the first hint of trouble – kick me out? What if the problem were more serious? What if, say, the on-board cameras – which driverless cars need to see and avoid obstacles – failed? What then? Would my safety still be guaranteed?

The answer matters for companies such as Uber. The ride-hailing giant suspended testing of its self-driving cars this week after one of them struck and killed a pedestrian in Phoenix. Yet the accident is unlikely hinder the company’s long-term plan of eliminating human drivers, in favor of machines. Uber’s main U.S. rival, Lyft, is pursuing similar efforts. The reason comes down to pure economics. Driver salaries are the largest cost for a ride-hailing service. Cut out the driver and the service becomes more lucrative.

That’s easier said than done. Self-driving cars are complex – so complex, in fact, that in order to work, they require hundreds of millions of lines of perfectly polished software code. More code means more features for consumers – features such as rear-facing cameras, collision warning and voice control. But it also means more opportunity for mistakes. When lives are at risk, public tolerance for those mistakes is low. Consumers may grumble when stuff breaks. I know I do. Now that someone has died as a result, let’s see if consumer trust wanes.

The public is already less than enthused by the technology. The reason? Personal safety. Surveys show widespread public fear over ceding complete control of a car to a robot. Car makers know this, so they have come up with a solution: remote control.

Starting next week, self-driving cars in California will rely on trained professionals to intervene if the car malfunctions. However, rather than being in the vehicle, these individuals will sit at a command centre located far away. From here, cars will be carefully monitored and when necessary, guided to safety thanks to wireless technology and more importantly, human skill. One industry executive has billed this setup, “the ultimate backup system.”

That’s the right sentiment. Watching over technology tempers safety concerns surrounding that technology. Few consumers (if any) would complain about humans – rather than machines – being the final arbiters of our fate. I know I wouldn’t. But remote control of self-driving cars raises an important question: how many cars should one person watch? Two? Twelve? Twenty?

For bean counters, the answer is simple: as many as possible. The reason, once again, comes down to pure economics. Paying one person to watch over one self-driving car wipes out the cost advantage that car has over its predecessors. With this setup, ride-hailing companies are better off using conventional vehicles. But if driver salaries can be spread over more cars – if one driver is made responsible for monitoring more than just one vehicle – remote control becomes more feasible. It also becomes more risky.

Picture this. You need to get to work and call for a driverless taxi. Moments later, it shows up at your door and away you go. Halfway through your trip, the engine starts sputtering and you realize something is wrong. You don’t panic because you expect a (remote) driver – watching over your car – to intervene and bring the car to safety. But no such thing happens. Instead, the car hobbles along and eventually ends up in a ditch. You survive only to discover that the driver assigned to your car – your driver – was monitoring several other vehicles at the time of the accident, leaving yours unattended. How would you feel? Would you use the same service again?

Humans can, of course, multitask. Air-traffic controllers do it (and do it well) every day. From dimly lit radar rooms, these skilled professionals – full disclosure: I was trained as one – can each be responsible for more than 15 airplanes at a time. The controller must carefully watch every one, ensuring the airplanes are on the right track and safe at all times. So why can’t a remote driver – charged with watching multiple self-driving cars – do the same?

The answer is they can but the margin for error is considerably smaller. If an air-traffic controller makes a mistake, a pilot can still act to keep the airplane safe. Pilots, in fact, have a responsibility to disobey air-traffic instructions if they believe those instructions jeopardize flight safety. However, if a remote driver makes a mistake, it’s game over. Why? Because there is no backup, no other person responsible to keep the car – and the passengers inside – safe.

This reality raises an important question: how many driverless cars can one person safely watch? On this issue, auto makers and their ride-hailing counterparts have been conspicuously silent. The reason? They haven’t figured it out. Until they do, I won’t be getting into a driverless cab, Uber or otherwise. 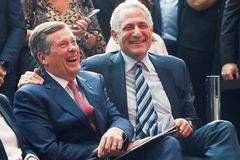 Opinion
How disruptive technologies are eroding our trust in government
May 1, 2017
Follow us on Twitter @globedebate Opens in a new window
Report an error Editorial code of conduct
Due to technical reasons, we have temporarily removed commenting from our articles. We hope to have this fixed soon. Thank you for your patience. If you are looking to give feedback on our new site, please send it along to feedback@globeandmail.com. If you want to write a letter to the editor, please forward to letters@globeandmail.com.
Comments are closed