Sarah Willson is a Vancouver-based member of No-Fly List Kids, a group of families whose children have been wrongly identified as terror threats.

I’ve managed to dodge this question for a few years now. My son, who has a Muslim name and has been falsely flagged on Canada’s no-fly list since he was a baby, just turned four years old. The day he starts asking these questions is approaching.

While I am dreading this conversation, what I dread more are the questions that will arise after the next terrorist attack against Muslims. No-Fly List Kids co-founder Khadija Cajee spoke about this conversation with her children following the New Zealand mosque attacks, and it is heartbreaking to listen to. We all want our children to feel safe, but how do we reassure them when these massacres are not isolated, and when violent attacks against Muslims are increasing?

At what age will my son notice the irony that he is likely treated as a bigger national security threat than white nationalist terrorists who murder innocent people?

After the New Zealand attack, it has become tragically evident, yet again, that we urgently need change. Bill C-59, a proposed national security package that includes a redress system for Canadians whose names falsely match people on the no-fly list, may control for false positives. But it will do nothing to undo the damage, or prevent further damage, caused by more than a decade of dehumanizing Muslim Canadians, which has systemically reinforced and normalized Islamophobia.

There are children who have been flagged since they were in strollers and are now entering adulthood. The damage resulting from profiling, stigmatizing and limiting the mobility of these affected youth for the duration of their childhood is irreversible. Those who are profiled may harbour feelings of shame and a need to distance themselves from their identities, and teenagers who are singled out on school trips may drop out of group activities and make decisions about their participation in teams based on these incidents. Ultimately, these kids are not getting the same adolescent experiences and opportunities as their peers. The harmful message they receive is that Muslims, of any age, should be feared and mistrusted.

Part 6 of Bill C-59, which provides the redress system, is the absolute least the government should be doing. Frustratingly, getting this bare minimum has been an uphill battle. It took years of lobbying to get a redress system prioritized in the federal budget.

But the legislation required to carry out the project was created not as a standalone bill (which would have been a no-brainer given the cross-party support) but as part of an omnibus national-security bill. It lives inside a large piece of contentious legislation that civil-liberty groups criticize for its increased threats to Canadians’ rights and the federal Opposition admonishes for being soft on terrorism.

For the innocent, law-abiding citizens who are wrongly flagged on Canada’s no-fly list, part 6 of the bill provides the only means to regain their Charter mobility rights, and it is the first solution that has been offered since the no-fly list’s inception in 2007.

Bill C-59 currently sits in Senate with no scheduled committee date. With the end of this parliamentary session nearing, the death of this bill is a concern, as that would put as back at square one with no end in sight to our Kafkaesque nightmare. If the bill receives royal assent, we still have no reassurances that a redress system will remain funded and prioritized, or be implemented effectively, particularly given the uncertainties of the upcoming federal election.

The lack of prioritization of this bill, and this issue in general, means that as many as 100,000 innocent Canadians will continue to be treated like second-class citizens. The threat that one of our children will become the next Maher Arar – the Canadian who was wrongly detained in a New York airport in 2002 and later tortured in Syria – is always looming.

Because Muslim Canadians are disproportionately affected, ignoring this issue sends the dangerous message that their community is not a priority and that their livelihood and rights are not valued. The fact that we must plead for a redress, with no guarantees, for those who are helplessly entangled in a national-security program criticized for its systemic racism and lack of evidence of its effectiveness is infuriating.

The fact that this type of treatment against Canadian minorities is nothing new in Canadian history (i.e. Japanese internment, the Chinese Head Tax, residential schools, carding, etc.) is demoralizing.

Canada envisions itself as a cultural mosaic, boasting of its diversity and respect for multiculturalism, but these are meaningless claims when our children remain targeted on terrorist watchlists.

The irony is that while Canada’s no-fly list was designed to protect innocent Canadians from terrorist attacks, recent events show that the individuals flagged on this list are actually the most likely to be the targets of the next terrorist attack. It’s a paradox that Bill C-59 can only begin to solve. 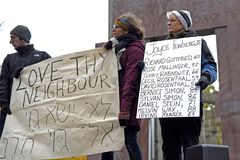