One of the highlights of the liturgical year, for me at least, when I was a seminarian in the mid-1960s, was the steak-and-wine celebration immediately following the Holy Thursday mass. The Feast of the Last Supper, as it was also known, was traditionally understood as the occasion when Jesus instituted the priesthood, so there was special reason for an enclave of clerics and would-be clerics to break their Lenten fast and rejoice in their unique and sacred calling. It was an event for men only, although in fact there were some women present: the nuns who prepared and served our food.

It was also the liturgy at which the feet of the youngest seminarians were washed by the rector and vice-rector in imitation of Jesus’s washing of the feet of the apostles at the Lord’s Supper. Again, the only women present were the nuns, who assumed a prayerful position at the back of the chapel. Their feet were excluded from the washing, although in terms of humble service – the model of behaviour Jesus exemplified – they were the best living illustration.

The faculty and students in no way saw this ecclesiastical arrangement as anything other than normative and unalterable. It was God’s will. It was their spiritual gift.

I was reminded of this patriarchal bit of theatre recently when the Mary McAleese affair erupted, first on the Irish scene and now globally.

An eminent jurist, past judge and the former president of Ireland from 1997 to 2011, Ms. McAleese had been invited to give a keynote address on March 8 at the Vatican for the Voices of Faith International Women’s Day Conference held under the auspices of the Dicastery of Laity, Family and Life.

The Prefect of this quite new Vatican department, Cardinal Kevin Farrell, disinvited Ms. McAleese. Instead, she delivered her address at the Jesuit Curia headquarters on the Via Santo Spirito, just outside the Vatican walls.

Cardinal Farrell’s fumbling assured instant notoriety. It also varied with Pope Francis’s very public championing of the gift of parrhesia, or bold free speech. The Pope frequently urged the bishops gathered at the two controversial synods on the family to speak with freedom of the spirit, not to be cowed by power and convention; to know that in dialogue there is truth. Somehow that noble exhortation doesn’t seem to have any currency.

She speaks her mind with undiluted clarity. Those gathered to hear her in person on Jesuit premises saw her at her polemical best: “How long can the hierarchy sustain the credibility of a God who wants … a church where women are invisible and voiceless in church leadership, legal and doctrinal discernment and decision-making?” Schooled in exercising responsible power in her own capacity, respected for her earned credibility as a legal authority, empowered by her baptism as a Catholic and fully conversant with her rights in the Code of Canon Law, Ms. McAleese chose the tuba mirum – sounding the trumpet on the last day – approach, calling the church she knows and loves to account on the issue of women’s equality, an institution she accuses of perpetuating the “virus of misogyny.”

Tough words coming even from the mouth of a virulent anti-Catholic but coming from a Catholic of established fidelity they have managed to penetrate the Vatican carapace itself, to the extent that the Holy See is unaccustomed to being at the end of a withering critique by a former head of state and a graduate of one of its own schools. The authorities knew she would be outspoken and they knew she would say things outside the received orthodoxies, but banishment to the Jesuits seems overkill and during a Jesuit papacy, more perplexing still.

Judging from the wide media coverage, sputterings of outrage, fulminations from the reactionaries, call to arms among the activists, genuine secular interest, enlightened commentaries from all perspectives, professions of loyalty of various hue, and widespread hierarchical muteness, the flames furiously burning by the McAleese affair won’t be easily doused.

Ms. McAleese is not going away and generations of like-minded Catholics won’t be silenced.

The sisters in my former seminary would be astonished; and we, the men of the church, ordained or otherwise, should be humbled.

That is a Holy Thursday experience worth institutionalizing. 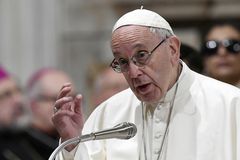 Pope condemns fake news and its use for political gain
January 24, 2018
Pope Francis condemns ‘scourge’ of corruption in Peru Subscriber content
January 21, 2018
Follow us on Twitter @globedebate Opens in a new window
Report an error Editorial code of conduct
Due to technical reasons, we have temporarily removed commenting from our articles. We hope to have this fixed soon. Thank you for your patience. If you are looking to give feedback on our new site, please send it along to feedback@globeandmail.com. If you want to write a letter to the editor, please forward to letters@globeandmail.com.
Comments are closed