The past few days could have been pretty rough for Andrea Horwath’s New Democrats.

As Ontarians were settling into their long weekends, perhaps discussing among themselves whether they should for once consider voting for an NDP government on June 7, news came of a very basic math error in the party’s platform – one that meant it had accidentally low-balled its deficit projections by $1.4-billion annually.

And as those voters were maybe starting to wonder which New Democrats they’d be voting for locally, there emerged a series of unhelpful stories about past comments by a few of the NDP’s nominated candidates – one objecting to Remembrance Day poppy wearing, another engaging in a little 9/11 conspiracy theorizing.

They were the sorts of not-ready-for-prime-time stories that had the potential to be momentum killers, for a party that suddenly finds itself competing for power after decades of being an also-ran. And they could yet prove that, when new batches of polls come out.

But it sure doesn’t feel, at the midway point of this four-week campaign, as though the wind is coming out of the New Democrats’ sails – not from watching their opponents attempt, with growing hints of panic, to sound alarms about them.

This is not a race in which Ontarians are falling in love with Ms. Horwath after easily resisting her charms twice previously, so much as one in which they’re looking at their options and figuring they might as well give her a try. And the difficulty for Doug Ford’s Progressive Conservatives and Kathleen Wynne’s Liberals in capitalizing on the recent revelations about the NDP points to why that is.

The PCs, who at the moment are still best-positioned to win government but find the New Democrats unexpectedly breathing down their necks, have been trying hardest to make hay of the candidate controversies. That included, on Tuesday, delegating a pair of their candidates to decry the NDP’s nominees as “radical and extreme”; later the same day they announced a new pledge to spare legion halls paying (municipal) property tax, presented without detail and seemingly concocted solely to keep the poppy-related controversy alive.

These efforts might be helpful in rallying the Tories’ base. But if there are swing voters inclined to view questionable candidates as reflections of parties’ suitability for office, they may have noticed Mr. Ford has spent some of this campaign on the defensive about Andrew Lawton – a candidate he appointed to run in a London riding despite a history of offensive comments about Muslims, women and gay people.

Mr. Lawton aside, the first thing that comes to mind at the moment when one hears about PC nominees is ethics controversies. Several nominations under former leader Patrick Brown had to be overturned before this campaign began because of alleged fraud; another PC candidate stepped aside last week when tied to an alleged theft of data about toll-road commuters; yet more still have clouds of suspicion hanging over them. Rarely has a party been less well-positioned to raise questions about rivals’ qualifications.

As for the NDP’s platform not holding up, courtesy of mistaking a $700-million reserve-fund expenditure for revenue, the Tories have been more quiet than one might expect of a party with a reputation for fiscal hawkishness. Possibly that has something to do with Mr. Ford declining to present a costed platform, nor even to detail a single cost-saving proposal while promising many billions of dollars in new expenditures and tax cuts. Every report on the matter inevitably points out that at least the New Democrats tried to make the numbers work.

Enter Ms. Wynne’s Liberals, who have made a more concerted effort to highlight the NDP’s bad arithmetic. The governing party, now running third, is in a continuing battle with the province’s Auditor-General, who accuses it of low-balling deficit projections by about $5-billion. That may be more a dispute over accounting practices than a math mistake, but it makes for an easy NDP rebuttal when the Liberals go after them – as does a general sense that the Liberals have managed finances in recent years more to meet political imperatives than out of any great responsibility to the bottom line.

These are probably not the toughest issues Ms. Horwath will face this campaign if she retains a real chance of becoming the next premier. But the way they are playing out is emblematic of the unusual opportunity she has.

Even when voters are hungry for change, as they are in this campaign, the NDP’s perceived competence is often its undoing. Against opponents ill-positioned to make that case, it’s a whole other ballgame. 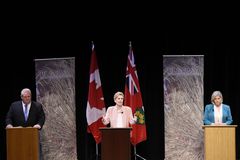 Opinion
Doug Ford’s campaign is a mess but it doesn’t seem to matter
May 18, 2018 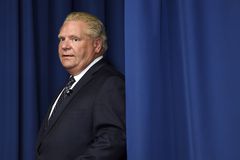 Opinion
If voters aren’t willing to buy what Wynne’s Liberals are selling, none of their advantages matter
May 15, 2018 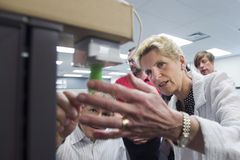