Marte Hoiby and Saumava Mitra
Contributed to The Globe and Mail
Published May 2, 2018 Updated May 3, 2018

Marte Hoiby is a journalist safety trainer and PhD fellow at the Oslo Metropolitan University, Norway. Saumava Mitra is a post-doctoral fellow in media, peace and conflict studies at the United Nations mandated University for Peace.

On Monday, nine journalists were killed in an apparently targeted attack, claimed by the Islamic State, in Kabul. There were other recent attacks elsewhere in Afghanistan – two of which each killed a journalist – but the incident in Kabul brings with it a particular message to society because of the seemingly well-planned, and successful, attempt to maximize casualties among journalists.

Such “deliberate targeting” of journalists – as the UN Secretary-General’s office described Monday’s attack – is not unheard of in Afghanistan. Nor are attacks by IS on Afghan journalists, targeted or not, particularly rare. Reports by Afghan Journalists Safety Committee (AJSC) have been documenting the increasing role played by IS in killing and threatening media workers in Afghanistan since the end of 2014.

Why should we pay attention to the death of these journalists? We must, because it highlights the very blind spots in our thinking about journalists killed in conflict zones.

The death of these Afghan journalists covering a suicide attack underlines the fact that we need to discard the outdated idea of heroic “foreign” correspondents reporting about distant wars. News from conflict zones – even for international news organizations – is increasingly produced by local journalists. When the security situation deteriorates, making foreign journalists’ access to conflict hot spots more difficult and unsafe, media outlets use news material, particularly visuals, from local journalists and photographers who are already at the scene.

In our research, we have interviewed local journalists and editors who cover conflicts in different parts of the world, in countries including Afghanistan, the Philippines, Nicaragua and Tunisia. We have seen that local journalists usually have much poorer access to hostile-environment training, work-hazard insurance or even medical benefits from their employers. They face different threats and risks than those who parachute into the conflict and have nowhere to go if the situation escalates. They are also much more prone to reprisals. The first step to help prevent their deaths is to acknowledge that the news we consume is often produced by journalists working under precarious conditions in hostile places.

The latest report from AJSC mentions that Afghan journalists are becoming casualties of an undeclared information war between them and militants, such as IS and the Taliban, because they provide news and information which run counter to the propaganda of the militant groups.

But it is not just the militants who fight this information war. Journalists we interviewed in Afghanistan told us how they daily faced threats both from militants and the military, both Afghan and U.S., as part of their job .Our research among 120 journalists and editors across four continents confirms this trend.

Monday’s targeted killing of Afghan journalists is neither an isolated nor a singular incident. We hope that the loss of these dedicated people, who rushed to report from what was soon to be their own death scenes, will not be in vain. Let them not be just one more “bad news” story from Afghanistan – let them be a part of our global conversation today about how to improve the safety of local, precariously-employed journalists who daily rush in to danger to feed us scoops of the misery caused by the wars in their countries.

Opinion
The war on journalism is only getting worse
April 20, 2018 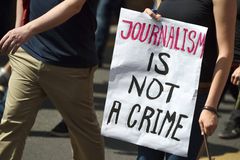 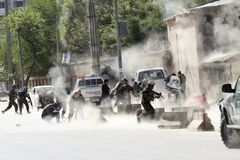