Pico Iyer is the author of 12 books, including most recently The Man Within My Head and The Art of Stillness. His next book, Autumn Light, comes out in April.

I walked up the narrow, dusty trail to Lamayuru monastery and looked out. For as far as I could see, there was just miles of khaki-coloured emptiness, lunar and humbling and unreal. The blue in the sky was so intense, I seemed to be in a different dimension. Nothing could be heard in the midsummer morning but the snapping of prayer flags in the wind. When I stepped into one of the dark chapels, swarming with complex paintings of gods and demons, it felt as if I could smell centuries of butter from the flickering lamps around the altar.

Great shafts of sunlight sliced into the musty space from high windows. Not far away, I’d seen a sign that said, too perfectly, “Welcome to Moon Land View.”

Why use all your time and money to go to Ladakh, I can almost hear a friend of mine saying? You can see all its remotest sites online now, in the comfort of your own home. You can hear monks chanting in its chapels, visit places on YouTube more beautiful and unworldly than anything you could see in person. The Discovery Channel will lead you on a guided tour through its history and its most private places with no danger of altitude sickness or stomach upsets. Why, there may even be a Ladakhi – not to mention a Tibetan lama – over in that temple near Bloor Street in Toronto!

Every one of his claims is true; today, for the first time in history, we can sample every last detail of Paris or Victoria or Macchu Pichu on our smartphones without ever leaving our bedrooms. The world has come to our doorstep as never before. And yet, I would contend, the easier it is to savour the planet onscreen, the more imperative it becomes to witness it in person. Everything that moved me deepest in a place such as Ladakh – the silence that seemed to have steadily built up, grain of sand by grain of sand, over centuries, the ready smiles of the villager who drove me to the faraway temples, the sudden shock of seeing a meditation hall tucked impossibly into a hilltop as one rounds a curve, the fact of nothing to be seen at all at times is exactly what almost never shows up onscreen.

Travel is, ultimately, about those words that begin in “trans.” Transport, transcendence and transformation. It’s not the sights that send one home a different person; it’s something around the sights, between the lines, a moment when one forgets oneself, that sudden serendipity not to be found on any postcard or secondhand image. A little boy walks across the great open space around the Taj as the sun comes up. My guide in Pyongyang breaks into a quiet rendition of a top-40 song. You get lost in a backstreet of Kyoto and come upon a tiny neighbourhood shrine you never thought to look for, not mentioned in any guidebook. Travel is no more about seeing the places on an itinerary than falling in love is about collecting facts on a résumé.

Indeed, the state of the world today suggests that countries are farther apart than ever before. I’m not confident my neighbours in California really know much about Syria or Pakistan, however much we hear about them. And who has ever seen a rendition of her community online that begins to correspond to the place she knows and loves? Travelling to Yemen and Iran and North Korea makes me think that the places we see most on screens are, in fact, the ones we’re most distant from in life. The more we glimpse surfaces, the remoter the depths too often become.

That’s why we are so subject now to a counterintuitive logic: The more we can get onscreen, the more some of us hunger for the real thing in the flesh. Now that we can access every last U2 concert online, people are more eager than ever to pay ever larger amounts of money to see U2 play in front of them. The more we can download images of Beyoncé, the more important it becomes to see her in person. Even we unglamorous writers are paid and encouraged more and more not to write, but to show our faces at public events, where people seem much more eager to see us than to read our books.

The more easily we can simulate or counterfeit reality, in other words, the greater the value attached to the real thing. That may be one reason why visiting celebrity restaurants has become such a form of competitive consumerism: Food is one thing we can’t devour online (yet). The reality show has made a simple taste of reality astonishing.

And so it is with travel. My great-grandparents could only read of Venice or Bangkok or Beirut, and look at paintings or photographs of them; my parents could see these places on television and in films, but they could also, if they were very lucky, save up for a once-in-a-lifetime trip to see one of them. Nowadays, we have everywhere accessible at the tap of a finger, and Google Earth will allow us to bear down on the most forgotten piece of rock in Petra. Which is precisely why going to Petra – and perhaps not seeing that piece of rock – has such an intangible power. The experience is not under your control; you can’t close the screen; you don’t know what is going to happen next; and, as people crowd you out, an urchin tugs at your sleeve and it begins to rain, torrentially, and something (it can occasionally feel like epiphany) can slip through the cracks.

I had reread Andrew Harvey’s classic work A Journey in Ladakh four times before I finally made it to the remote Himalayan region several years ago. I knew that, when I was in high school, the area was not even open to the world; at the time Bill Clinton came into office, it did not enjoy electricity. Until very recently, the only way to get there was a notorious 48-hour bus ride around steep curves on precipitous slopes, from Srinagar. Nowadays, several flights leave every morning from Delhi, and get you there in barely 90 minutes.

But nothing that I had read or seen about Ladakh began to prepare me for the sensation of standing alone on a temple terrace, as a Tibetan living in Afghanistan clambered up to join me in the silence. Nothing I’d watched online had prepared me for the signs along the road saying, “Love thy Neighbor, but not while Driving.” None of my trips to similar landscapes in Tibet and Bhutan and Dharamsala and Nepal had prepared me for the little sign outside the Pizza de Hut restaurant – “Thanks for the visit. God Bless You. Take Care. Bye-Bye.” One Saturday night in Leh, I stepped through a back door and climbed up some stairs to a little coffee house where two Himalayan boys were struggling to strum through a version of Hotel California.

Outside, under a high, pulsing moon, the temples on the hillsides looked ghostly in the dark. Soon, all noise had subsided in the streets nearby. Six or seven teenage girls in the room sat rapt before the local mimics of Don Henley and Glenn Frey. Yes, perhaps I could see the treasures of Hemis Monastery online. But no digital world could bring me the smell, the scratchiness, the sweetness of that room.

It’s easier to see the world at home than ever before. Go see it in the round.

Chef Don Alfonso Iaccarino on eating and travelling around the world
August 8, 2018 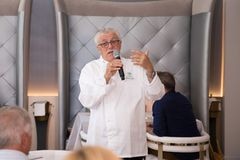 Take your canoeing to the next level on Ontario’s mighty Madawaska
August 23, 2018 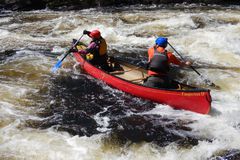 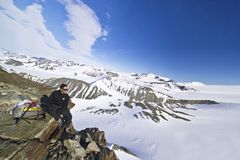