Angela Merkel was sworn in this week as German Chancellor for a fourth term. It took all of her negotiating powers to secure the coalition necessary to maintain power – but maintain power she did.

Of course, Germany uses an iteration of proportional representation (PR) in forming its government, a fact that has forced leaders such as Ms. Merkel to compromise her agenda at times. While the German leader’s Christian Democratic Union party got the most votes in last year’s election, it was still just under 33 per cent of the total ballots cast.

In other words, why would her CDU party be given unfettered control over the country’s affairs when it received just one-third of the vote total? So once again, it was pressured to join forces with the Social Democratic Party, which received just over 20 per cent of the vote – the next-highest total – to form a grand coalition. This came at a cost: Ms. Merkel had to give up the finance and foreign minister portfolios to her governing partner.

One could argue that’s appropriate.

This has all happened as British Columbia again prepares to offer its citizens the opportunity to change the province’s electoral system to a form of PR. B.C. currently uses the same first-past-the-post (FPTP) rules every other province does. It is a simple, but grossly unfair way to run a democracy.

The problem is well understood by now. The composition of legislatures under a FPTP or winner-take-all model rarely reflects voting results. It often favours parties that have support bunched up in heavily populated areas. One of the most notable examples of that phenomenon is the 1993 federal election when the Progressive Conservatives got 16 per cent of the vote but only two seats in the House of Commons, while the Bloc Quebecois received 13.5 per cent of the total vote and 54 seats. The western-based Reform party, meantime, got under 19 per cent of the vote and 52 seats.

Any fair-minded person can see the issue here. Today, we get majority governments elected by a minority of citizens. The present system denies parties that get a smaller plurality of votes their fair share of seats. That is simply an undeniable fact.

Those resistant to change offer mostly flimsy arguments to bolster their positions. Why fix what’s not broken, they insist. (Except the current system is broken). Or the detractors will trot out Italy, and the chaos witnessed in its parliament because of PR. Yes, Italian politics boasts many parties and is filled with much emotion and drama, but that’s Italy, and that’s its people, not necessarily the voting system it uses. For the most part, countries using PR are governed extremely well, in some cases far better than those using a majority-rules structure.

In British Columbia, you have die-hard New Democrats arguing against electoral reform because they believe it’s not in the party’s best interests because it will forever prevent the NDP from forming a majority government. And you have die-hard BC Liberals making precisely the same argument about their party’s electoral chances under PR. Their positions are not based on what’s best for democracy, but what’s best for their parties.

And if that isn’t a good reason for changing the status quo, I don’t know what is.

BC’s NDP government is inching closer to unveiling what the question (or questions) on the mail-in referendum ballot this November will be. Once that is settled, the two sides of this fight will engage in what is likely to be a loud and nasty dialogue. It always is when power is at stake.

Of course, British Columbians have voted on electoral reform twice before. In 2005, 58 per cent marked their ballots in favour; unfortunately the threshold set by the Liberal government of the day was 60 per cent. Four years later, there was less enthusiasm for change, with only 39 per cent voting in favour of it. This time around, the NDP has set the bar for reform at 50 per cent plus one, which scares those who want to keep things as they are.

I’m not sure there is a huge appetite to upgrade the current system. That might change once the Yes and No sides launch their respective campaigns, and rancour ensues.

As it does, Ms. Merkel will be once again overseeing one of the most stable liberal democracies in the West. One that honours every citizen by making their vote count – something that can’t be said about parliamentary government here.

Opinion
BC NDP ignores elites and tables budget for those who need help
February 21, 2018 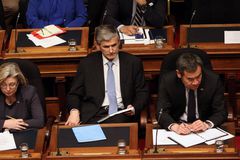