Erna Paris is the author of The Sun Climbs Slow: The International Criminal Court and the Struggle for Justice

Although ordinarily somnolent, the black dog of unaddressed history will sometimes warn about obscured misdeeds. U.S. President Donald Trump’s nomination of Gina Haspel to head the Central Intelligence Agency has triggered just such a wake-up – for Ms. Haspel’s history with the CIA includes practising torture – a war crime – during George W. Bush’s “war on terror.”

There was sporadic outrage when Ms. Haspel’s nomination was announced: Republican John McCain demanded that she explain the nature of her involvement in the interrogation program. Democrat Ron Wyden said her past makes her “unsuitable to serve as CIA director.” The American Civil Liberties Union called for her CIA records to be declassified. But when the moment of her Senate confirmation arrives this month, only one thing will matter: the decibel rate and the resonance of their dissenting voices.

Ms. Haspel is currently the deputy director of the CIA – an appointment by Mr. Trump (a man who statedly “loves” torture) that did not require formal confirmation. But the director’s job does necessitate Senate approval and Ms. Haspel will face tough questions about her role, in late 2002, at a secret CIA “black site” in Thailand, where she is known to have supervised acts of extreme violence. In particular, she has been intimately connected with the abuse inflicted upon Abd al-Rahim al-Nashiri, an al-Qaeda suspect.

Because torture has been conspicuously sanitized as “enhanced interrogation,” we need to know facts. Mr. al-Nashiri was waterboarded – a simulated drowning technique bequeathed to the world by the Spanish Inquisition – three times. He was subjected to a mock execution, during which his interrogator simulated loading a gun, then accelerated a power drill next to his head. He was locked for days in a coffin-sized box. He was deprived of sleep and hurled against the walls of a cell. His tormentors scrubbed his anus and scrotum with a stiff brush, then scrubbed the inside of his mouth. Sixteen years later, Mr. al-Nashiri is still imprisoned in Guantanamo Bay, a destroyed man. The case against him is weak and has never come to trial.

But Ms. Haspel was not one to cringe; on the contrary, videotapes were made of the interrogations (for reasons one can only guess at) and stored in a safe at the site. In November, 2005, they were destroyed by Ms. Haspel and her colleagues , a potentially criminal act that became public only in 2007. But impunity ruled in 2010, when a special prosecutor from the U.S. Department of Justice decided not to file charges. Ms. Haspel has never been called to account; on the contrary, she has received a number of awards including the George H.W. Bush Award for excellence in counterterrorism and the Intelligence Medal of Merit.

When she faces the Senate committee, she will be closely shadowed by the black dog, for the truth about state-sanctioned torture has slowly emerged over the past decade, only to be rhetorically denounced. If Ms. Haspel has remained unaccountable, so have many other high-level officials from the Bush administration. Although torture is a crime under the Geneva Conventions, no one in a command position has ever been charged with a criminal offence.

Following Ms. Haspel’s nomination, the ACLU published a timely reminder of the chief architects of U.S. state-sponsored torture. Prominent among them were: Condoleezza Rice, chair of the National Security Council Principals Committee, that approved the torture of detainees; Alberto Gonzales, White House counsel and attorney-general, who helped craft the legal justifications for the torture program; former president George W. Bush, who issued the order to set up secret sites overseas and instructed that the protections of the Geneva Conventions did not apply to suspected Taliban and al-Qaeda prisoners; and Dick Cheney, the vice-president, who had a hand in virtually every aspect of the torture program, personally approving specific interrogation techniques and also making the case that the Geneva Conventions did not apply.

Two psychologists were also on the roster: James Mitchell and John (Bruce) Jessen, his assistant. Dr. Mitchell, who designed and oversaw the CIA’s torture program, has admitted to personally torturing prisoners. His theory (based, in part, on abused dogs) was that breaking down humans caused “learned helplessness,” which would lead them to reveal information.

At this high level, everyone involved would have known that the 1987 United Nations Convention against Torture, to which the United States is a party, was no minor commitment. The Convention prohibits torture absolutely. It requires states to take measures to prevent torture in any territory under their jurisdiction and forbids them to transport people to any country where there is reason to believe they will be abused. Torture is a crime within the deep recesses of what is known as jus cogens – the fundamental overriding principles of international law from which no derogation is permitted.

The very unambiguous nature of the Convention against Torture may help explain why the Bush administration so vociferously denied its torture program was, well, a torture program; and why lawyers such as Mr. Gonzales studiously deconstructed the lexicon of “cruel and unusual punishment” – the Convention’s definition of torture. From a public relations point of view, it was critical to redefine language in order to claim that the interrogations were nothing to worry about. The Bush administration practised deception in order to circumvent the very international rules they claimed to uphold, as well as to protect the chain of command: those who gave the orders as well as those who carried them out.

The men and women who planned and practised torture in the post-9/11 era would likely have known that dozens of studies conducted on Chileans, Argentines and other survivors have indicated that it simply doesn’t work: that people will say anything to make the pain stop. They would certainly have known that the “I was only obeying orders” defence had been shot down a half-century earlier at the Nuremberg trials, where the top Nazis were tried, then reconfirmed by the International Criminal Tribunal for the former Yugoslavia in 1998. Yet, they went ahead.

In the early years of the war on terror, the wordsmiths of euphemism who invented the phrase “enhanced interrogation” and laboured to make torture “legal” were concerned about being seen to breach the Torture Convention. Today, the question is: Does the American political class still care? Will Ms. Haspel be rewarded for torture?

Some are agitating for her arrest as a war criminal. A civil-rights group based in Berlin has asked the German authorities to issue a warrant for having overseen the torture of terrorism suspects. The European Center for Constitutional and Human Rights has also requested her arrest. The U.S. Center for Constitutional Rights has filed a brief with the International Criminal Court, whose purpose is to prosecute the perpetrators of war crimes and other major offences.

With his nomination of Ms. Haspel, U.S. President Donald Trump inadvertently reopened the unresolved issue of state-sponsored torture in the war on terror. As the postwar liberal order dribbles away, along with respect for international norms, the likelihood of her being blocked by the Senate may be low. One thing, though, is certain: The senators’ decision will be a marker of attitudes to human rights and a rules-based world order among America’s elected leaders.

Analysis
Trump the disruptor: Is he the precursor to a new style of presidency or an aberration?
March 18, 2018 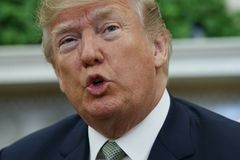 Trump critics attack firing of FBI's McCabe as political move
March 17, 2018
Opinion
A successful Trump-Kim summit would be a thorn in China’s side
April 2, 2018