But none can compare to Attorney-General William Barr, the President’s all-powerful, crafty and duplicitous top law enforcer.

The Attorney-General’s role, as per the Department of Justice website, is “to ensure fair and impartial administration of justice for all Americans.” Mr. Barr appears to have a different understanding. His idea of impartiality is to serve as a presidential appendage.

In just 16 months on the job, he’s violated the principle of independence so much that it’s hard to keep track of the travesties. He’s curtseyed to the White House and done the President’s bidding in several cases, including the Mueller Report, the cases of former national security adviser Michael Flynn and political consultant Roger Stone, the Horowitz report on political bias in the FBI’s investigation into potential ties between Russia and the Trump campaign, the Ukraine impeachment file, the use of force against peaceful protesters and more.

“Where’s my Roy Cohn?” Mr. Trump once asked, referencing his absolutely ruthless lawyer and fixer from his days as a private citizen. He’s found him in Mr. Barr, and the consequences are frightening.

To be an autocratic authoritarian leader of the type Mr. Trump appears to admire, it’s necessary to have your judicial branch on bended knee. He can only be delighted with what his DOJ appendage has done so far and what he might do in the months before the election and, should he lose, in the days following.

The 70-year-old Mr. Barr, who secretly worked for the CIA while attending Columbia University in the 1970s, is a true believer, as he has written, in unchecked executive power. He has already served as attorney-general to the first George Bush. He’s an ultrareligious man, one of those Catholic conservatives of the far right who majors in self-righteousness. He believes militant secularism is destroying the moral fabric of the United States.

His latest act on behalf of the President was to support having what looked like robocops forcibly remove peaceful protesters from the White House area so that Mr. Trump could make his way to St. John’s Episcopal Church to brandish a Bible. Mr. Barr claimed the protesters weren’t peaceful. Videos of the event testified otherwise. He defended the use of pepper spray, claiming the substance is “not a chemical irritant,” even though it is.

One of Mr. Barr’s first acts on behalf of the President was to issue a positively spun summary of the Mueller Report weeks before the full report came out. It was so favourable it rankled Mr. Mueller. Mr. Barr then challenged Mr. Mueller’s findings, particularly in respect to obstruction of justice.

In an extraordinary intervention, the Attorney-General pushed for “far less” imprisonment for Mr. Trump’s old friend Mr. Stone for lying to Congress and witness-tampering. This was after the President had signalled his displeasure with the original sentencing recommendation. All four prosecutors on the case withdrew in protest.

Similarly, Mr. Barr’s department filed a motion to withdraw its criminal case against Mr. Flynn, the former national security adviser and ally of the President who had pleaded guilty to making false statements to the FBI. The move led to howls of protests from ex-prosecutors.

Not to be forgotten is Mr. Barr’s willingness to protect Mr. Trump in declining to investigate a whistle-blower’s allegation that he used his office to solicit interference from Ukraine in the 2020 U.S. election. Mr. Barr advised the acting director of national intelligence not to send the complaint to Congress.

In yet another eye-popper, Mr. Barr rejected a finding by the DOJ’s inspector-general, Michael Horowitz, that the FBI had good reason to investigate the Trump campaign’s ties to Russia. Mr. Barr now has John Durham, a federal prosecutor who agrees with his take on the Horowitz report, running a separate criminal probe into the origins of the Russia investigation. He’s investigating the investigators, trying to find indictable offences committed by members of what Trumpians like to call the “deep state.”

Through all the abuses, Mr. Trump’s appendage has maintained his calm. He shows no signs of being intimidated by the legions of critics. As someone apparently worried about the moral fabric of the nation, he shows no concern over what he and Mr. Trump are doing to it.

Mr. Barr knows the law, and he has no hesitation to use it and skewer it on the President’s behalf. As a dangerous force in America, he is second only to his master. 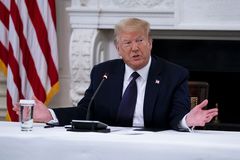 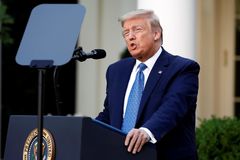