Well that’s pressure. Inappropriate pressure. Hounding, nagging, issuing veiled threats. That was the pressure from Prime Minister Justin Trudeau and his office to get the attorney-general to change her mind on a criminal prosecution. That’s what Jody Wilson-Raybould described.

If Ms. Wilson-Raybould, the former justice minister and attorney-general, spoke the truth and the whole truth, then the only conclusion is that Mr. Trudeau and a lot of people around him didn’t. But more than that.

Mr. Trudeau’s former minister just went before a House of Commons committee to accuse him of attempted political interference with the criminal prosecution of SNC-Lavalin – quoting conversations, and texts, and recounting meetings that culminated in veiled threats that she was headed for a collision with the PM if she didn’t change her mind.

No one’s ever seen that in Ottawa before.

Politically, Mr. Trudeau’s best hope is that the public thinks he had good intentions – of saving jobs and keeping SNC-Lavalin’s head office in Montreal. But that just might be complicated by Ms. Wilson-Raybould’s recollection that Mr. Trudeau raised concerns that prosecuting SNC-Lavalin might affect the Quebec provincial election, and that Mr. Trudeau noted he is an MP from a Quebec riding.

Mr. Trudeau also said he had told Ms. Wilson-Raybould that the decision – whether to defer the bribery prosecution of SNC-Lavalin and strike a negotiated settlement instead – was entirely hers. Ms. Wilson-Raybould recounted repeated pressure afterward. She said she told Finance Minister Bill Morneau last September that his staff had to stop raising the issue with her, but they didn’t stop. She said in December she told Gerald Butts, then the PM’s principal secretary, that the PMO had to stop raising the case, but they didn’t.

That wasn’t the PMO’s version. They conceded early on, soon after The Globe and Mail reported that Ms. Wilson-Raybould was pressured, that there had been conversations, even vigorous debate, but it did not constitute pressure. They pointed to the so-called Shawcross doctrine, which states that an attorney-general may consult ministers about a prosecution, but ministers must not pressure the attorney-general to take a particular decision. Ms. Wilson-Raybould’s version of events makes it clear that line was crossed.

“I think there is no question the line was crossed under any understanding of Shawcross,” Victoria Colvin, of the University of Wollongong in Australia, said in an e-mail. She is a former B.C. prosecutor who has studied issues of prosecutorial independence. Dr. Colvin wrote that in the sparse history of cases such as this, Ms. Wilson-Raybould’s statement is “extraordinary and to my knowledge unprecedented in its scope and detail.”

That’s no small thing. There’s a reason to keep prosecutions insulated from politics. Prosecutorial independence is a constitutional convention. Violating it is a major ethical lapse.

Mr. Trudeau and his Liberals will hope that’s too legalistic a point to seize the attention of the public. They will argue that they were fighting over important matters of legitimate public interest – saving hundreds or thousands of jobs, and keeping a jewel of Quebec Inc. in Montreal – and trying to get Ms. Wilson-Raybould to listen.

It’s too bad for Mr. Trudeau that Ms. Wilson-Raybould recalls the Prime Minister raising the issue of his own job, as a Quebec MP, and the Quebec election campaign that was then under way.

And if this were such a matter of public interest that it was more important than prosecutorial independence, there was another way. The Prime Minister could have directly ordered the attorney-general to make a settlement with SNC-Lavalin, in the open, for everyone to see. But Ms. Wilson-Raybould’s testimony suggests that Mr. Trudeau wanted to have his orders followed without having to give the order. His aides suggested that if Ms. Wilson-Raybould intervened, they would line up people to write op-eds arguing that she had done the right thing.

That is clearly not the open and accountable government Mr. Trudeau promised. That’s trying to arrange the Prime Minister’s outcome behind closed doors, but keeping the accountability away.

Will Mr. Trudeau or any of those aides contest her account of events? Ms. Wilson-Raybould’s testimony hasn’t just accused the PM and the PMO of improperly interfering with the attorney-general but also, implicitly, of deceit ever since. It won’t be easy now for the Prime Minister to argue he did it all with good intentions. 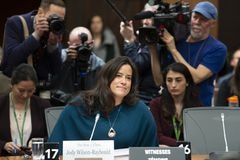