Robert Huebert is an associate professor at the University of Calgary

At the conclusion of the Arctic Council meeting earlier this month, U.S. Secretary of State Michael Pompeo stated that Canada’s position on the Northwest Passage is “illegitimate." This should be the definitive proof that the Trump administration cares only about winning, with no regard to its own interests, let alone those of its closest ally and economic partner – Canada.

Mr. Pompeo’s statement is only the latest in a series of comments by Trump administration officials who have made it clear that it is now time to win their argument with Canada regarding the status of the Northwest Passage. The Americans have always maintained that it is an international strait, while Canada argues it is internal waters. The difference in these two positions concerns international shipping through the passage. If Canada is correct, then we have the right to either allow or refuse the entry of foreign vessels in the passage. If the American position prevails, then all international shipping – including submarines – can use the passage regardless of Canada’s position.

In 1988, through the direct involvement of then-president Ronald Reagan – a Republican – and then-prime minister Brian Mulroney the two countries reached a practical solution to the dispute. Agreeing that this solution would not prejudice each other’s position on the passage, the United States would ask Canada for consent for its icebreakers – the only American surface ships capable – to traverse the passage. In return, Canada would automatically grant the consent. With this solution, neither state could be viewed as giving ground and it was a means to avoid politically costly disputes over the issue.

However, due to Mr. Trump’s pathological need to win, the Americans are set to disregard this solution and win the dispute. The U.S. Secretary of the Navy – Richard Spencer – has publicly stated three time this year that the United States is preparing for what they call a freedom of navigation operation through the Northwest Passage. This means sending their one operationally functioning icebreaker or a naval ship through the passage without asking Canada for permission. The idea is not only a direct, stupid insult to Canada, but it is also directly against U.S. interests.

First, while lambasting the Canadian position, Mr. Pompeo also attacked Russia and China for their moves to militarize the Arctic. Given that Russia is actively militarizing and China may soon be taking similar action, the United States’ move to attack Canada, its most important ally, while meeting this threat makes no sense. If the Americans are really concerned about the rise of Russian military strength in the Arctic, they need Canada to help meet the threat.

Specifically, the North American Aerospace Defence Command needs to be modernized to counter the growing Russian threat in the Arctic, and that cannot occur without Canada’s participation, given our Arctic geography and long-standing co-operation on this issue. Given this backdrop, it is astounding that the Americans think provoking Canada on one of the most politically sensitive issues regarding Canadian-U.S. relations is rational. What Canadian prime minister will want to work with the United States to modernize our shared northern defences if they destroy the 1988 agreement that had politically resolved the problem of the Northwest Passage?

Secondly, a freedom of navigation challenge will create a lose-lose situation for the U.S. If the Americans conduct a successful voyage and use that operation at an international court to win their position that the NWP is an international strait, they will open the passage to unimpeded transit of Russian and Chinese submarines and aircraft. Under international law, submarines enjoy the right of transit passage through international straits submerged. If the United States are really concerned about a rising Russian and Chinese threat in the Arctic, how can they possibly believe this is a good thing?

On the other hand, if the ship they send fails to make the transit, whether due to ice conditions or the lack of proper charting in these waters, then all they will have done is prove the Canadian position that these waters are unique and are not a functioning international strait.

Further, the United States will have damaged its relations with Canada. Whether Mr. Trump succeeds or fails in the Arctic, he will have seriously hurt the U.S. relationship with Canada right at the moment they need to be working more closely with us.

While Mr. Trump may get to claim that once again he has won where others have not, what he will actually do is seriously hurt American interests and cause further damage to the special relationship that existed between Canada and the United States.

Agreeing on the Arctic: Amid dispute, Canada sides with China over the U.S. on how to manage the North
May 10, 2019 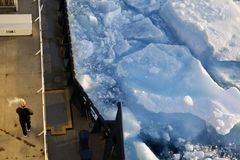 U.S. says Canadian claim to Northwest Passage is ‘illegitimate’
May 7, 2019 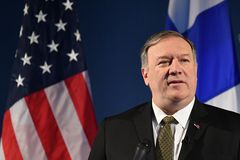