John Yoo is the Berkeley law professor who, in 2002, notoriously wrote the legal justification for waterboarding and other forms of torture for the administration of U.S. President George W. Bush.

Now he is advising Donald Trump on the extremes he can go to in exercising his presidential power. Mr. Trump, wouldn’t you know it, likes very much what he is hearing.

Given the precedent of a recent Supreme Court ruling on the Deferred Action for Childhood Arrivals or DACA program, in which the court upheld a 2012 executive order from former president Barack Obama, Mr. Yoo says Mr. Trump is now free to issue executive orders in respect to health care, immigration, criminal justice, inner-city policy and the like.

Mr. Trump, who told Fox News he would follow up on the highly dubious legal interpretation, has never been shy about pushing authoritarian limits and is now even more emboldened.

Exhibit A: Mr. Trump sending in federal police officers – “stormtroopers,” as House Speaker Nancy Pelosi called them, or political props as others have described them – to crush protests by the Black Lives Matter movement in Portland, Ore.

The move, as can be imagined, has prompted outrage from local and state governments, as well as constitutional scholars. Mr. Trump looks prepared to do anything to salvage his collapsing presidency, including putting the democratic rights of Americans on a ventilator.

At the beginning of June, with protests against the death of George Floyd raging across the country, Mr. Trump called on state governors to use the National Guard to “dominate” the streets. If they didn’t, he said he would “deploy the United States military and quickly solve the problem for them.”

That sounded like an overstatement at the time. But it doesn’t sound so exaggerated now, not with the President’s bully brigade having descended on Portland in unmarked vans, wearing green military fatigues with police insignia. They clubbed and seized demonstrators from the streets, taking them off to detention, and denying, as constitutional law experts have said, basic rights of assembly, free speech and lawful arrest.

On Monday, hundreds of women – “moms,” as they called themselves – joined the latest round of protests by linking arms while federal agents used tear gas and batons to push them back.

Mr. Trump’s shadowy police force was from the Department of Homeland Security and its subagencies. He announced that he intends to send other such units, answering only to him, to other cities such as Chicago and New York, whether they like it or not.

The cities, Mr. Trump emphasized in order to brazenly politicize the demonstrations, are “all run by very liberal Democrats. All run, really, by radical left.”

How astonishing can it get with the 45th president? Are we to imagine federal stormtroopers acting as political props, unleashed throughout the great republic to do his authoritarian bidding against the Democrats, denying protesters due process?

What’s next in the land of the free? Martial law?

As Oregon’s Democratic Governor Kate Brown put it, “This political theatre from President Trump has nothing to do with public safety.” Rather, “it’s a mission to provoke confrontation for political purposes.”

Faced with multiple calamities – health, economic, racial, not to mention his own countless afflictions that are speeding him toward defeat – Mr. Trump is attempting to create a huge diversion. He wants to incite more protests and create utter lawlessness, attribute it all to the Democrats, and then cast himself as the restorer of order, the anchor against anarchy.

Oregon is a hotbed of progressivism, which dates far back into the state’s history. The vast majority of protesters are peaceful advocates for the Black Lives Matter movement. There are some who are inexcusably violent, as is often the case with mass protests; they have targeted government buildings, including a federal courthouse, with fireworks and projectiles for more than 50 nights and counting.

But to send a federal paramilitary force to Portland and to other Democrat-run cities, for ulterior political motives, is a plunge into authoritarianism we’ve yet to see from an American president.

With the November election campaign moving into high gear, Americans are beginning to see how low Mr. Trump will go. He refused to say again this week whether he would accept the presidential election verdict. He threateningly tweeted that mail-in voting “will lead to the most CORRUPT ELECTION in our Nation’s History!”

His only hope is to create alternative realities, including that of a country under siege by Democratic radicals. He can then invoke oppressive powers, imagined by the likes of torture advocate Mr. Yoo, and hope Americans are dumb enough to buy in. 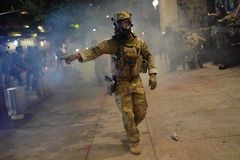