Did anyone expect anything different?

He’s a protectionist who has built his brand on retrograde nationalism. The tariffs are in keeping with that.

He’s treated Canada more like an adversary or enemy than an ally all along, becoming the first president in more than century to do so.

He warned Ottawa weeks ago that the tariffs were coming. And Prime Minister Justin Trudeau pricked Mr. Trump’s mammoth ego by not showing up in Washington last month for the signing of the United States-Mexico-Canada Agreement (USMCA). Mr. Trump knows he is viewed with disrespect and derision by the vast majority of Canadians. There’s no love lost. Why not perhaps get in a last whack?

Trailing badly in the polls, and in a desperate political situation, Mr. Trump is reasoning that he has to resort to far-reaching measures to show American workers that he’s their great protector. He won in 2016 with that kind of campaign. He seems to think, though few others do, that he can do it again this time.

The strong negative reaction from Canada to the tariffs was hardly surprising. More telling were the opinions from Americans.

The tariffs, said the U.S. Chamber of Commerce, are “a step in the wrong direction.” They will “raise costs for American manufacturers, are opposed by most U.S. aluminum producers, and will draw retaliation against U.S. exports – just as they did before.”

The U.S. Aluminum Association turned its thumbs down, saying the Trump claim that Canadian imports had surged was “grossly exaggerated.”

In announcing the new tariffs, Mr. Trump wildly asserted that “Canada was taking advantage of us, as usual.”

In the spring, Alcoa Corp., citing falling aluminum prices, announced it would lay off 700 workers at a smelter in Washington State. But that state’s congressional delegation told him that it was China that was to blame for excess production, not Canada.

Mr. Trump’s restoking of the trade war comes only a month after the new USMCA deal went into effect. It comes at a time when, owing to the coronavirus pandemic, the Canada-U.S. border is shut down to all but essential traffic.

The Trudeau government will retaliate, as it should. Canada’s former Washington ambassador David MacNaughton, who fought hard to get the Trump administration’s previous steel and aluminum tariffs lifted, was incensed by the Trump move. “What nonsense!” he said in an e-mail. “I expect tough retaliation. Deservedly so. What a way to treat an ally.”

If one of Mr. Trump’s purposes was to deliver a blow to Mr. Trudeau with the tariffs, it won’t happen. The controversy will help detract from the Prime Minister’s problems at home. Canadians will likely support him as they have in the past when the President has gone the bully route. He’s an easy target.

The Canadian government’s retaliation could hurt Mr. Trump in important electoral swing states. Something this President does not appear to understand is a point made by Mr. Trudeau in June. He said that “our economies are so interlinked that punitive actions by the United States administration end up hurting Americans the same way they end up hurting Canadians.”

Canada is just one of the traditional Washington allies Mr. Trump has treated with disregard and, at times, disdain. He did have a case against North Atlantic Treaty Organization (NATO) members on their lack of burden-sharing, in regards to defence outlays. With sustained pressure, he got many of them, Canada included, to improve their contributions.

But the idea that metal imports harm the national security of the United States, which is another reason given for the new tariffs, is – as Deputy Prime Minister Chrystia Freeland has repeatedly pointed out – nonsense. In a major war scenario, the U.S. would need trade co-operation from allies for a more secure supply of aluminum and other resources – and they would receive it.

The Trudeau government has demonstrated patience for the most part in dealing with the fractious President. Given the power imbalance, it’s had little choice. But with the increasing likelihood that Mr. Trump won’t be around for a second term to wreak more havoc, it can take a harder line now. As shown during a visit to Ottawa in 2016, presumptive Democratic presidential nominee Joe Biden has an excellent rapport with the Trudeau government. Fence-mending will come quickly.

Mr. Trump has never visited Ottawa once, unlike almost every other American president. In a reversal of the theme of brotherly love, his presidency has featured repeated threats against Canada, insults of its leaders, a torching of the 2018 G7 summit held in Quebec, and a lack of understanding of the historic partnership.

This latest act – hopefully, Mr. Trump’s last belligerent one – will seal his reputation among presidents as arguably the worst Canada has faced.

Opinion
The myth of cultural fingerprints: In this pandemic, Canada has just as much in common with the U.S.
Subscriber content
August 7, 2020 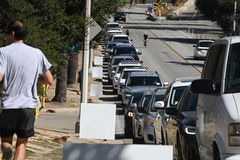