On Thursday, President Joe Biden finally holds his first full-fledged press conference. It’s a record of sorts. In the last century no newly elected president passed his first two months without having one.

While drawing rebukes from Republicans, the no-show hasn’t hurt the 46th President. Staying out of the media’s way is staying out of harm’s way. My take from covering press-conference encounters suggests leaders are better off avoiding them.

For honeymooning Biden, the latest polls indicate about 54% of Americans approve of his performance so far, while 40% disapprove. Ratings for the media-obsessed Donald Trump in his initial months were closer to the opposite.

At his first encounter, Mr. Biden will be thrown a lot of marshmallows, scoffed Mr. Trump. Questions like “What did you have for dinner?”

As an illustration of what disgruntled righties see as the lap-dog treatment accorded Mr. Biden, they cite the scant attention paid to his stumbling three times up the stairs of Air Force One as if in a slapstick comedy routine. Where were the geriatric jibes?

They compare this to the drubbing Mr. Trump took last year for his troubles descending a ramp after a speech at West Point. CNN devoted 22 minutes to it. The network even called in Dr. Sanjay Gupta for a dissection of his ambulatory afflictions.

In respect to the media, one thing Mr. Trump is delighting in is the plunge in their profits now that his circus has left town. “Without me their ratings are going down the tubes,” he predicted in 2017.

Early indications suggest he was right. By comparison to him, Mr. Biden is a box-office bust. According to Nielsen Media Research, CNN has lost 45 per cent of its prime-time audience in the past five weeks. All mainstream outlets have suffered. The Washington Post saw its website visits tumble 26 per cent from January to February. The New York Times lost 17 per cent. Fox News ratings however have only dropped 6 per cent.

But the ratings factor is hardly the most important impact Mr. Trump has had on the media. The deeper damage has been to its credibility. His four years of unrelenting attacks on so-called fake news has badly beaten down the level of public trust, frail to begin with, in journalism.

He’s widened the gulf between progressives and conservatives, embedding the bifurcated media ecosystem. Advocacy journalism has taken over. At least in terms of public perception, journalism has been reduced to a clash between armies of the right and of the left.

The media have become the lifeblood of America’s corrosive and destructive – as seen on Jan. 6 – culture war. That war is not going to end or abate unless the media changes and there are no signs that this is going to happen.

Mr. Biden’s low-key style so far has had no soothing impact. The right is digging in, a recent example being a brutal broadside from the bench. In a libel case deliberation, Judge Laurence Silberman, a Ronald Reagan appointee, called The New York Times and the Washington Post “Democratic Party broadsheets.” He added that “one-party control of the press and media is a threat to a viable democracy.”

Is the judge so mired in myopia he doesn’t think that right-side media such as Fox News is a factor or that Mr. Trump with his attempted election result negation was a graver threat to democracy?

Mr. Trump is not finished with the media yet, not by a long shot. Having been banned from several social-media platforms, he is now planning on launching a platform of his own. “It’s going to completely redefine the game,” boasted his spokesman Jason Miller.

Mr. Trump had close to 90 million Twitter followers. That’s not a bad base to work from. But critics scoff at the idea, as well they might. How’s he done, one might ask, on new business venture startups so far? How did he fare with Trump University and Trump Shuttle and Trump casinos and Trump magazines and Trump Vodka?

But even if it’s a no go or he doesn’t purchase social network Parler, we can bet that the resilient demagogue, assuming he is not bedecked in an orange jump suit, will continue to wreak havoc on the fourth estate. His narcissism demands it.

Much of the other damage he has inflicted over the last four years can be reversed or limited by the Biden administration. But his entrenching of the two media solitudes, and by consequence the destructive American culture war, is not among them. 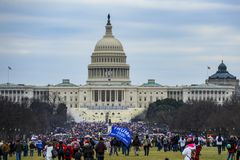