Lori Turnbull is the Director of Public Administration at Dalhousie University and deputy editor of Canadian Government Executive magazine.

Parliamentary systems are known to concentrate power in the hands of prime ministers, premiers and the staff who surround them. This power has several mutually-reinforcing sources, and perhaps the most significant of them all is the power to make appointments.

Prime ministers and premiers appoint ministers, judges, senators, diplomats, members of agencies, boards, and commissions, and heads of Crown corporations. Some of these appointments are obviously political in nature and serve the political purposes and agenda of the first minister.

For example, ministerial appointments fall into this category. Other appointments, however, are made not for political purposes, but in the name of the Crown to perform a public function and to serve the public interest. These appointments are made through “orders in council,” which are government orders that are recommended by the prime minister or premier (and cabinet) and are signed by the governor general or lieutenant governor, depending on the jurisdiction.

The position of the commissioner of the Ontario Provincial Police is made through order in council. On Nov. 29, 2018, it was announced that Toronto Police Superintendent Ron Taverner would become the new commissioner. This announcement garnered much attention and concern because of the known decades-old friendship between Mr. Taverner and Ontario Premier Doug Ford. The Integrity Commissioner is investigating whether the Premier involved himself in the hiring process. In December, just before the appointment was about to take place, interim commissioner Brad Blair filed a complaint with the provincial Ombudsman out of concern for the integrity of the OPP in the event of political interference in the process. Mr. Taverner has yet to assume this appointment.

Premier Ford has up until now insisted that the appointment has followed the appropriate channels and that Mr. Taverner was the nominee who was unanimously recommended by the independent arm’s-length panel tasked with finding a new commissioner. But this week he changed his tune. On Monday, he announced that the selection of the OPP commissioner is actually a “political” appointment and as premier, he can choose whomever he wishes.

Here’s the thing: He has a point. The order in council is signed by the lieutenant governor on the advice of the premier and cabinet. Because Premier Ford holds a majority in the legislature, there are no solid grounds upon which to question his ability to give advice to the Crown’s representative on appointments. There’s no reason the Lieutenant Governor would not take this advice. Further, because these are ultimately Crown appointments, any process designed to help facilitate these appointments (including the independent panel to which Premier Ford has referred in this case) is advisory and can be ignored by the premier and cabinet with no legal recourse.

So yes, Premier Ford can appoint whomever he wants. But he shouldn’t.

There is a fundamental public interest in the independence of appointments like this one. There is a public need to separate the leadership of the provincial police from the political arm of the province. The perception of possible political interference in this appointment would only undermine Mr. Taverner’s authority on the job, should he assume the appointment at some stage, and no doubt would dampen the morale of the OPP.

In many instances, the challenge is that our parliamentary system relies on good faith (rather than clear, enforceable rules) to maintain ethical standards. The relationship between the premier and the lieutenant governor, the Crown’s representative, has evolved historically so that the former holds responsibility for choosing Crown appointments in practice, even though the latter signs the paper. This is sensible, given that the premier is elected and accountable to the public for his decisions. It is dangerous, however, if the premier does not place value on the integrity and transparency of the appointments process and on his primary responsibility to protect the public interest.

If the appointment of the provincial police commissioner is treated as a political one, one wonders what would fall outside the scope of the political – according to Premier Ford. It is unclear how this case will be resolved, what the ongoing investigations will find, and whether Mr. Taverner’s appointment will take effect some day. The situation exposes our vulnerability to political ambitions in a system that relies too heavily on unwritten conventions to govern important decisions and to protect the public interest. Premier Ford is gambling on public ignorance and/or apathy toward appointments; he figures he’ll get away with this. Time will tell the extent to which this issue resonates with voters. 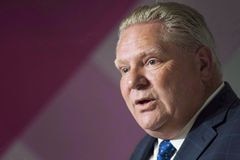