The House of Commons recently voted unanimously to label the killings, persecution, rape, abuse, destruction of homes and forced displacement of Rohingya from Myanmar as genocide. More than 900,000 Rohingya have fled Myanmar since 2017.

On Thursday, the House also voted unanimously to revoke Aung San Suu Kyi’s honorary Canadian citizenship, which she received in 2007. These two actions should be applauded.

Revoking the coveted status of citizenship is appropriate, given that many Rohingya have no citizenship whatsoever. What most people may not realize is that since 1982, Rohingya have been denied any entitlement to be citizens of Myanmar.

Many Rohingya are stateless as a result. Overnight, Rohingya became illegal immigrants within their own country. While initially they were given temporary identity cards, such documents were revoked to deny them the right to vote in a 2015 constitutional referendum.

Rohingya did not only lose citizenship, but also their recognition as one of the country’s 135 official ethnic groups. To participate in a 2014 census, they had to identify themselves as Bengali.

The loss of citizenship is not a benign act, especially for those who have no citizenship elsewhere. My family knows first-hand what being stateless means.

My father was stateless in Brunei and told me it was difficult to plan for the future, that he had difficulty finding employment and feared being removed from his country of residence. He was afraid his children would not receive education, would be treated differently and would never belong. As a stateless person, he never felt safe.

Being stateless means, at a minimum, loss of basic rights such as an identity recognized by the state, access to health care, education, employment and freedom of movement. Even obtaining a bank account, cellphone or registering birth, marriage or death are difficult, if not impossible. Access to venues to protect your human rights, such as not to be detained arbitrarily, becomes more difficult when you are not protected by the state you thought was your home.

For Rohingya, however, it has meant much more. The stripping of their citizenship has fueled discrimination, persecution and violence against them.

The difference and othering created by this has cast the label of outsider on the Rohingya and justified the oppression they have suffered for years. The institutionalized exclusion of Rohingya in 1982 and the perpetual rejection and discrimination has allowed hate and violence to simmer and boil over 30 years.

Ms. Suu Kyi herself stated in 2012 that she “didn’t know” if Rohingya could be considered citizens of Myanmar. In 2016, she told the U.S. Ambassador to Myanmar that the Rohingya are not among the country’s official ethnic groups. As well, in 2016, Ms. Suu Kyi denied that ethnic cleansing was taking place.

Many have described Ms. Suu Kyi as being silent on the issue of the persecution and violence. But the few statements she has made on the issue of the Rohingya’s citizenship and belonging, while crimes and violence against them were widely reported at the same time, cannot be considered silence. They are endorsements of the ethnic cleansing and genocide that has been allowed to continue.

Her statements frame the primary justification that Rohingya do not belong in Myanmar.

Second, Canada is making a powerful statement about her role in denying citizenship to those that, in emerging international law, should enjoy such status by virtue of their dominant, genuine and effective links and their past and ongoing habitual residence in Myanmar. Rohingya have been in Myanmar for years, even before the country gained independence from British colonialization.

Finally, this unprecedented move has given some heft to Parliament’s recent recognition of the genocide. Honorary citizenship should not be held by a person who allows others to harness the legal fact of statelessness to engage in oppression, violent displacement and the killing of Rohingya. 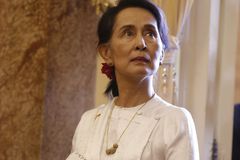 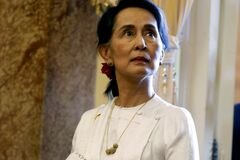 U.S. accuses Myanmar’s military of a ‘planned and co-ordinated’ campaign of atrocities against Rohingya
September 24, 2018 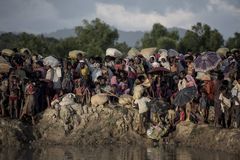