The mourning of Nelson Mandela as the saviour of South Africa is a natural outpouring of affection for an exceptional human being.

But watching sadly as the rain drizzled down on his funeral in that far away stadium, I was silently aware of those others whose supportive roles were also indispensable, if less dominating, or performed away from the public eye.

Mr. Mandela was not the only ANC activist sentenced to life imprisonment in the 1960's. Others joining him on that infamous Robben Island included Walter Sisulu, a brilliant strategist for the ANC during its early, troubled times and Govan Mbeki, a journalist who had bravely documented the appalling conditions under which black Africans lived. He was also the father of Thabo Mbeki, Mr. Mandela's successor as President of South Africa, who had been exiled through much of his youth. Cyril Ramaphosa was not part of that imprisoned group – like Thabo Mbeki, he is the next generation – but he was a courageous trade union leader when that was a dangerous occupation for a black worker.

I think also of Helen Suzman, the Jewish member of South Africa's parliament from the 1950's – the only one at the time who spoke out against apartheid. It was Helen who introduced me to many of the ANC leaders during my first visit to South Africa in 1991 – the first official visit by a Canadian foreign minister in thirty years, timed after Mr. Mandela's release as a symbolic gesture of support for the negotiations which were just beginning.

Most particularly, I think of F.W. de Klerk, elected leader of South Africa's National Party and therefore president of the country in 1990. His first act as president was to free Mr. Mandela and those of his political colleagues still in prison.

Virtually his second act was to announce a Whites Only referendum to secure the support of what might still have been a recalcitrant population for an end to apartheid. And his third was to enter into negotiations with Mr. Mandela and the ANC to bring about a democratic South Africa. Had there been a different national leader, apartheid might have dragged on much longer. Without him, there may well have been no peaceful negotiation, and a descent into chaos.

Yet today, in this reflective time of mourning for the global hero in Mr. Mandela, Mr. de Klerk's legacy is virtually ignored, so much so that a CBC journalist, reporting on Mr. Mandela's death, referred to the president who initiated the end to apartheid as Frederick Wilhelm, without his surname, as though he were a German Kaiser from World War I.

Yet clearly, Mr. de Klerk was vital to the successful closing of the apartheid era.

On that first historic visit, in my role as chairman of the Commonwealth Foreign Ministers' Committee on South Africa, I met separately with both men for the first time during the negotiations. My meeting with Mr. de Klerk did not go well; he was not remotely charismatic, and his manner was civil – but just. The contrast with the warmth and grace of Mr. Mandela, whom I had just left, could not have been more obvious. Whether it was because of the stance Canada had taken throughout the era of prime minister Brian Mulroney, or whether it was because he thought my skirt was too short, Mr. de Klerk clearly did not warm to me. His single-minded objective was to get the economic sanctions lifted. When he learned that would not yet happen he made it clear the discussion was over.

Yet, as I observed throughout the negotiations that followed, Mr. de Klerk and soon-to-be president Mandela shared a single mindedness to get the job of bringing about a democratic South Africa done. The negotiations were hardly harmonious. More than once they teetered on the knife edge of breaking down. As acts of violence in the cities and townships escalated, each leader blamed the other. Trust between the two disintegrated and never was wholly rebuilt, even as they stood with gritted teeth accepting the Nobel Prize they shared. Both men were iron willed and formidable, each in his own way, and because they shared the goal if not the path, that iron will served each of them – and the process – well.

Mr. de Klerk became part of president Mandela's Unity Cabinet – they continued to need each other as Mr. Mandela led the country towards a more stable and integrated future. But Mr. de Klerk soon faded into near obscurity, and was overtaken by declining health.

Still, in this time of praise for the truly exceptional Nelson Mandela, a man who, as U.S. President Barak Obama said changed hearts as well as heads, let us not forget that his indispensable partner also turned heads, and probably some hearts too.

From Canada’s delegation, Redford and Cotler reflect on deep connections to Mandela
December 10, 2013 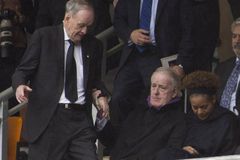