The Northwest Passage may be ice-free this summer, for only the second time in recorded history. The Canadian Arctic is being fundamentally transformed.

As the ice diminishes, new actors and interests will arrive. Who is coming? What will they do? What does it mean for Canada? Many people expect international shippers to take advantage of the shorter distances between Europe and Asia to carry goods through an increasingly ice-free Passage. Most shipping experts, however, think that will happen only in the medium term. Before the larger companies commit themselves to Arctic voyages, they will need longer, and much more certain, times of open water.

The increased use of the Arctic for other economic activities is much more likely. In particular, the huge oil and gas resources in and around the Northwest Passage may be best brought to market by ship rather than by pipeline.

The oil and gas in the Canadian Arctic's islands and waters have not yet been developed only because of the difficulty and expense of extracting and delivering them from the North - impediments that are lessening.

The Manhattan tested ice in 1969

Hitherto, we thought about moving that oil and gas to southern markets by pipeline, specifically the Mackenzie Valley Pipeline. Tankers could not work in the North, it seemed. The Americans had considered but rejected the use of ships to transport oil from the Alaskan north slope. In 1969, to test the feasibility of oil tankers, they sent an ice-strengthened tanker, the Manhattan, through the Northwest Passage. Its difficulties trying go through the ice of the Passage convinced the Americans that a pipeline was the better (and cheaper) option.

But much has now changed. The skyrocketing prices of oil and gas have renewed the interest of all the major producers in northern oil and gas. In 2007 Exxon and its partners successfully bid more than $500-million to begin a five-year exploration program in the Mackenzie Delta and Beaufort Sea. This year BP bid $1.2-billion for exploration rights in the Beaufort Sea. The reality is that with oil at more than $130 a barrel, the North looks very promising to these companies.

Other changes, too, may have worked against the building of the Mackenzie Pipeline. First, climate change is making the use of pipelines more problematic. As the Arctic warms and the ice melts, so does the permafrost on the land. This means that any structure that is built on the ground is collapsing as the permafrost melts. Both the Russians and the Americans have already begun to face major problems in maintaining their existing northern pipelines.

Second, the rise of demand from countries such as China and the resulting high price of steel has dramatically increased the expected cost of building the pipeline.

A third factor is the emergence of new ship-building technologies for operation in ice-covered waters. Shipbuilders in South Korea and Finland are finding ways of building better ice-capable oil and gas tankers. Using new propulsion technology (called an Azipod) that allows a propeller to be swiveled 360 degrees under the ship, companies such as Samsung Heavy Industries are building tankers that have a normal ocean-going bow at the front but also have an ice-breaking bow at the stern. So they go forward in ice-free waters, but when they meet ice, they turn their propeller around and go backward. This means that these ships are able to operate in both ice-covered and ice-free waters. The first such vessels, being built for the Russian Arctic, have been very successful. The same South Korean companies are now working on plans for ice-capable liquefied-gas (LNG) carriers.

At the same time, the Russians are developing the means to build offshore platforms that can move from field to field, can withstand the new ice conditions of the North and can condense gas on site to a liquefied state ready to be loaded on to carriers.

Only the Russians are currently developing ways to ship both oil and gas from Arctic offshore platforms. But surely the major North American companies must now be looking at the possibility of using a similar system.

If those companies do opt for this, it will be important to know where the terminals will be. If they are built on the American side of the Arctic, Canada can expect the sovereignty crisis of 1969 and 1970 to be renewed. There have been no changes in either the American or Canadian position about the passage of tankers through the Northwest Passage. If the Americans develop a shipping capability and decide to send their vessels to the east, they would need to go through Canadian waters. They would probably not be any more willing to ask Canada's permission than they were in 1969.

On the other hand, if the extraction platforms are placed on the Canadian side - and the ice-capable tankers leave from Canadian locations - there will be no sovereignty problem, but we will still have a problem of control. Our ability to assert control in our northern waters is limited. An increase of ship traffic accompanying such a development will require the Canadian government to act. It would need to increase its ability to monitor commercial-ship activity and to provide search and rescue, and proper environmental assistance, in the event of an accident. Currently, we cannot do much of any of this.

Our Coast Guard's icebreaking fleet is small and aging; our search-and-rescue capability is based in the south; our navy has a very limited ability to go north; we require industry to provide for their own rescue capability; and we maintain almost no oil-spill response equipment in the North.

In short, we are not prepared for any shipping, let alone for large tanker traffic.

To its credit, the current government has promised to build six to eight naval Arctic offshore patrol vessels and to replace the largest and oldest Coast Guard icebreakers.

So far, however, no contracts have been signed, and both projects are still in the development phase. Canada will need each of these groups of vessels, and more, if it is to properly control its northern waters.

More troubling is that the government has failed to develop a comprehensive policy framework to control the Arctic effectively. The Martin government had begun such an effort, the Northern Strategy, with a section that was to provide a much stronger policy framework to assert Canadian control over our Arctic waters. Its defeat derailed that effort. The Harper government has promised to continue this work, but has not publicly released any version of its strategy.

Time is running out. If we do not have a clear policy framework for all shipping in the Arctic, it will be too late to do so, after the new shipping arrives. Already, some foreign companies are beginning to resist Canadian efforts to control their activities.

Many Canadians know that in the early 1970s the Trudeau government enacted the Arctic Water Pollution Prevention Act. It was and is very strong legislation that sets strict environmental rules for ships in the North. But what Canadians may not know and may find disturbing is that, though the AWPPA looks powerful, ships entering the Canadian Arctic are asked to obey it on a voluntary basis.

Strictly speaking, all foreign vessels entering Canadian Arctic waters have to follow the rules in the AWPPA. But they do not have to tell Canadian authorities that they are entering these waters! Under the provision of the Arctic marine-traffic system (NORDREG), ships are not required to report. Until this year, almost all ships have been willing to do so. This has been largely due to the fact that, until they report, they cannot access Canadian reports on ice conditions. But in 2007 and 2008, two cruise ships, the Hanseatic and the Bremen, declined to report to NORDREG. (The Hanseatic, it is worth noting, ran aground in Canadian Arctic waters in the early 1990s.) This is very troubling. Why they suddenly decided to do this is unknown. But it reminds the world that Canada does not have effective control. If NORDREG were mandatory, the government could have simply forbidden these vessels to enter our waters. Of course, it would have needed the ships to enforce the prohibition. Some of its icebreakers might have been in place, but given their currently small numbers, a element of luck would have been needed.

As it stands, the defiance by the Hanseatic and the Bremen are a direct challenge to the Canadian ability to control its northern waters and provides a glimpse what Canadians can expect more of.

The melting ice in the Northwest Passage is going to result in more international shipping in the Arctic. Canada needs to be prepared for when it comes, or else the world will simply ignore Canada.

Rob Huebert is a senior fellow of the Canadian International Council 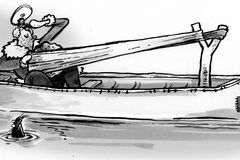