Fourteen years ago, Jean Chrétien's government decided, after much hesitation, to buy four used diesel-electric submarines from Britain. Two years later, 12 years ago, the purchase was made.

Today, all these years later, only one of the four submarines is working, in the sense of actually moving around in and under the oceans: HMCS Windsor off the east coast.

Two others - HMCS Corner Brook on the east coast and HMCS Victoria on the west - are under repair. HMCS Victoria, in dry dock at Esquimalt, has been out of commission for three years. It was supposed to return to service in late 2009, but that in-service date was pushed back until late 2010. The navy announced last month that the date would be delayed again, until perhaps mid-2011.

As for the HMCS Chicoutimi, nothing but tragedy and frustration has defined its history with Canada. In 2004, making its way from Britain, a fire broke out aboard that killed one person, wounded two others and left the vessel adrift at sea in rough weather for days.

Eventually, it was towed at considerable cost from the east coast to dry dock in Victoria. Initial estimates suggested that repairs and refit might cost $100-million, but the latest figure is around $370-million, with the submarine not ready for deployment until perhaps late 2012.

Assume - given the track record of this project, any assumption is just a guess - that everything now goes according to schedule. If so, Canada will have four diesel-electric submarines operating, 14 years after signing the deal with the British. Remember that the submarines were 18 months to seven years old when Canada agreed to buy them.

In the United States, with its sometimes aggressive congressional committees, this project would have produced angry hearings about delays, cost overruns and responsibility. Hearings have indeed been held in the Canadian Parliament, but they have been quite mild, luckily for the navy. But then this submarine program has been under the watch of both Liberal and Conservative governments, so neither major party's interest lies in kicking up a public fuss.

Only an agency such as the office of the Auditor-General would be likely to sort out everything that has gone wrong. But plenty has, clearly, such that the sub repairs are eating up 25 to 40 per cent (estimates vary) of the navy's maintenance budget for all ships.

Not all military purchases go so badly awry, but some do, as this one illustrates. Therefore, any time the public is told that a massive purchase such as the F-35 fighter jets will cost the sticker price put in the window by the government and manufacturer, the reaction should be at least caution, if not profound skepticism.

Britain, with nuclear submarines, decided in 1994 to mothball its diesel-electric ones. In 1998, Canada agreed to lease-to-purchase them for $897-million. It seemed like a dream deal, since Canada wouldn't actually fork over the money. Instead, Britain would simply not pay for a decade's worth of use of Canadian training facilities.

Diesel-electrics couldn't compete with nuclear submarines, but when the idea of purchasing nuclear subs was explored by Brian Mulroney's government in 1986, reaction was so negative that the idea was dropped.

The navy turned to the British subs as a cost-effective, politically saleable way of remaining in the submarine game, which in part meant being able to receive intelligence from the U.S. and British navies. Leaked cables from the Pentagon showed Washington urging the diesel-electrics on Canada. The British subs Canada would purchase were slow, as submarines go, but quiet and hard to detect. They could therefore be usefully used by the Americans and British in sub-hunting exercises.

In the early days of the submarine decision, one former submarine commander (who favoured the nuclear option) presciently warned that any attempt to retrofit the diesel-electrics "is likely to be a technical and financial nightmare." David Rudd, then president of the Canadian Institute of Strategic Studies, cautioned that the subs would be "strategic orphans" for which spare parts and maintenance would be higher than average, because they were the only ones of its kind in the world.

Those warnings have been proved correct, in spades.

Opinion
There'll be no stealth in touting the F-35
January 19, 2011
Harper defends fighter deal in campaign-style attack on Liberals
January 14, 2011 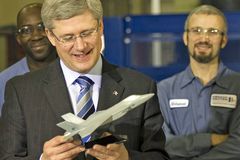 new
Military sets out to trim all but essential civilian staff
December 28, 2010
Follow us on Twitter @globedebate Opens in a new window
Report an error Editorial code of conduct
Due to technical reasons, we have temporarily removed commenting from our articles. We hope to have this fixed soon. Thank you for your patience. If you are looking to give feedback on our new site, please send it along to feedback@globeandmail.com. If you want to write a letter to the editor, please forward to letters@globeandmail.com.
Comments