It's not exactly breaking news that women walk a fine line when it comes to how much and what kind of emotion we present in public – and, if it helps, I am smiling while I type this. But not this. Now I am not smiling. Now I am serious, but I'm not being a drag.

I am just serious in a way that says "I'm ready to listen. Now would be a good time for you to talk."

Now I am smiling again, but just enough to let any sensitive onlookers know that I'm not angry with them. Or anyone. I have never actually been angry with anyone, ever, in my whole life. I did not want that parking space anyway.

I'm well aware that anger in a woman is viewed less as a motivating force of legitimate origin, something that really might fire a girl up to do great things, and more as a pre-existing condition based upon which a woman can be denied credibility-coverage at any point down the line.

Almost invariably the intonation will be entirely different for these two lines.

"She's really angry" will usually be said as if some highly unfortunate diagnosis were being made.

"She's really angry," people will say, sometimes shaking their heads. It's said as though, somehow, through her own poor decision-making skills, our hypothetical angry woman has succumbed to some kind of ghastly and fatal skin disease.

"She's really angry…" they will say.

"Oh, no!" the listener will instinctively cry. "How long does she have left?"

It's not surprising that most women learn pretty early not to drift too far over to either side of the emotional prime meridian that has been mapped out for us.

Stray to the passionate side of that line, perhaps lured away from the straight and narrow by an excellent joke, an idiot boss or enthusiasm for one's job, and we're judged to be "too emotional" to be relied upon, possibly even "angry." Which, as everyone knows, demands a complete quarantine.

Cautiously chart a course toward the other – sombre – side and you're unlikely to be celebrated as "dispassionate," "reserved" or "stoic."

You'll just be a "stone, cold bitch" or "too remote to be relatable." if you're being discussed on a panel show.

This standard is how we got to commentator after commentator insisting that Americans viewed former First Lady, senator and Secretary of State Hillary Clinton as some kind of chick-Hal 9000 capable of only "I'm sorry, Vladimir, I can't do that."

Which may not be just what America needs, to be honest.

What Ms. Clinton really had to do during the debates, it was advised, was not lay out her vision for America, trade on her wealth of experience, answer yet more questions regarding her use of a private e-mail server or even just tear down her opponent, but "prove she is human."

Honestly, the e-mail thing should have been evidence enough. Not really understanding how one's e-mail works should clinch it for anyone. It's as if, reliability-wise, Hillary Clinton had a beer with 90 per cent of the American people.

Karl Rove and a number of George W. Bush White House staffers used private domains to send and receive a massive number of e-mails, as many as 22 million of which may have disappeared into the e-ether, and yet these fellows are seldom hung in effigy by raging crowds in repurposed sports stadiums.

Cries of "Lock Karl up! Lock Karl up!" do not echo through Democratic Party rallies. There are, however, now cries of "Lock her up! Lock her Up!" when Donald Trump angrily (but that anger should be taken as an indication of just how deeply wronged he has been, not as proof of deep-seated emotional instability) mentions any of the women (I won't even bother giving a number, what with this still being a few hours from going to press) who have accused him of sexual assault and/or harassment.

Feel free to take that as an indication of what those cries of "Lock her up!" are really about.

For the record, were I speaking in public, I would, at this juncture, laugh a little bit, noiselessly, I promise. Think Mary Pickford, if that helps.

Yes, I would laugh at this point, but not so much as to give the impression that I'm not taking every single person in the world seriously, no matter what the hell they are going on about.

Then I would smile like everyone was watching – because I am a woman in public and so there's a good chance they are watching. They are watching my teeth, which are getting dry under these lights, and it's just possible I will, upon occasion, take my pleasantness a touch too far.

Smiling, for women, is the avocado of facial expressions.

It's all about trying to hit the smiling sweet spot us ladies, I say, smiling, but only slightly.

For the love of God, don't cry. If you ever feel yourself tearing up a touch while discussing months of hard work on behalf of your nation being flushed down the drain by Wallonia, look around for a convenient distraction.

Is there by chance a small, adorable, helpless puppy in the room? Good. Pick it up and throw it out the window. This will likely play better in the press than you sniffling a little in public.

You wouldn't want to give the opposition any ammunition, now, would you? Hurl the puppy, ladies. Given a choice, always hurl the puppy.

I think our Minister of International Trade, Chrystia Freeland, learned that last week when she wisely, as it seems to have turned out, and convincingly announced that, as far as the long-sought and elusive Comprehensive Economic and Trade Agreement was concerned, Canada was taking its puck and going home.

"Since the trade minister is incapable or unwilling to do her job and ratify this vital trade deal, will the Prime Minister grab some adult supervision, get on a plane, and go back over to Brussels and get this job done?" Conservative MP Gerry Ritz demanded to know.

Note that Mr. Ritz was fully prepared to credit Justin Trudeau – arguably the most big-L Liberal of Liberals, a Liberal squared, in fact, a man the Conservatives like to attack as being just "a drama teacher" with "nice hair" – with having what it takes to get CETA sorted, something they sure as hell failed to do.

A Harvard- and Oxford-educated Rhodes Scholar who happened to mist up a bit, on the other hand, just had to be in way over her pretty little head.

Mr. Ritz was that anxious to infantilize the minister, that sure his dig would be well received. He saw an opening – women don't get much of a window; we're either babies or crones – and he took it.

All the little girls in Canada heard you, Mr. Ritz, and you know what they're doing? They're smiling.

That should make us all sad, Mr. Ritz, and maybe angry, and we'll all be better off when all the girls are just laughing at you. 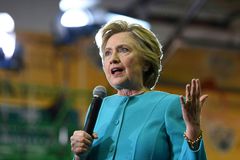